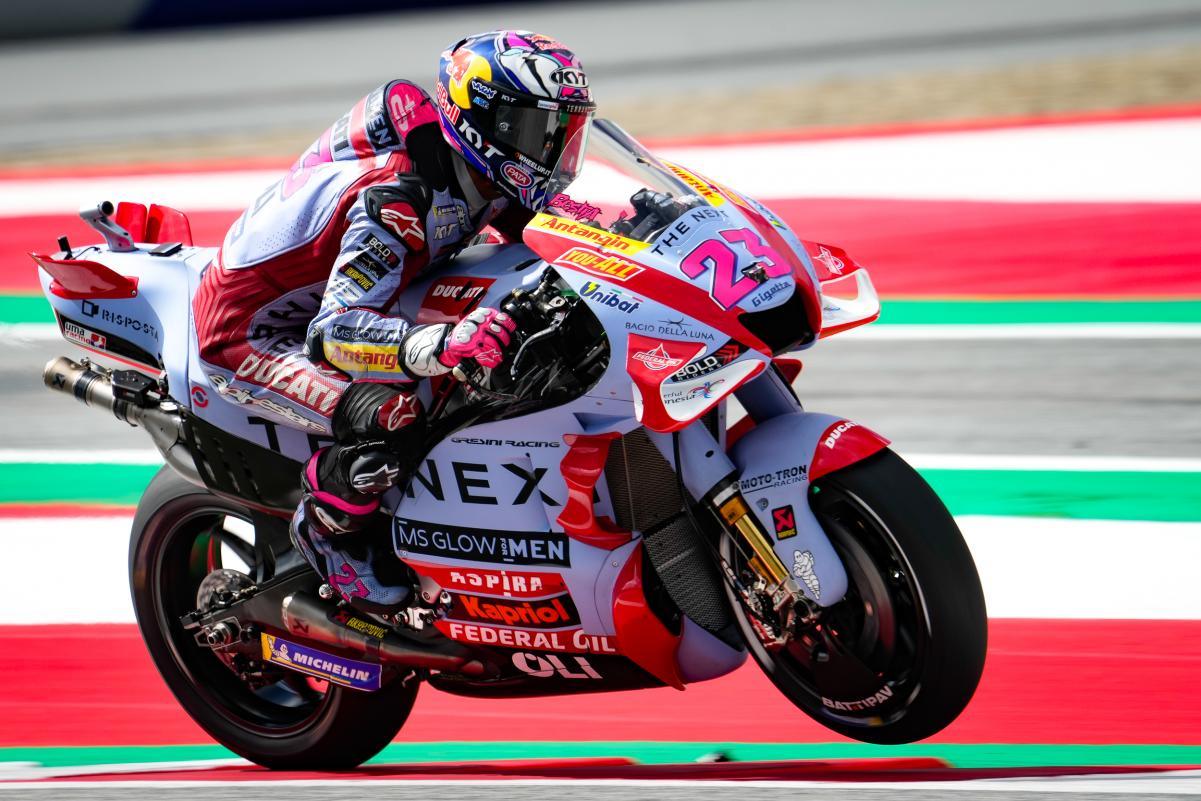 The first part in MotoGP qualifying in Austrian GP at Red Bull Ring saw the Espargaro brothers lead the way at the halfway mark where Aprilia’s Aleix was on top with a 1m29.430s lap from Honda’s Pol, who was only 0.045s behind.

VR46 Ducati’s Luca Marini wasn’t too far ahead in third with Gresini Ducati’s Fabio di Giannantonio and LCR Honda’s Takaaki Nakagami making it a Top 5. The second running from the riders saw a crash for two riders at the same Turn 3 corner.

LCR’s Alex Marquez and VR46’s Marco Bezzecchi were the ones to crash out, as they then rushed back to the pitlane to try and hop onto the second bike. Aprilia’s Espargaro upped his pace to a 1m29.231s to make it into Q2 at ease in a good show.

Gresini’s di Giannantonio pushed out the other Espargaro to be second and into Q2 with a 1m29.350s lap. The Honda rider ended up fifth to start 15th behind VR46’s Marini and LCR’s Nakagami, as Yamaha’s Franco Morbidelli was 16th.

RNF’s Darryn Binder was 22nd from Tech 3’s Raul Fernandez, Aprilia’s Lorenzo Savadori and LCR’s Marquez, who was the another one to not get a quick lap time after a crash.

The second part in MotoGP qualifying in Austrian GP saw Ducati’s Jack Miller set the pace early on with a 1m28.898s lap as he headed Gresini’s Enea Bastianini and Pramac Ducati’s Johann Zarco in the Top 3, with Yamaha’s Fabio Quartararo only sixth.

Ducati’s Francesco Bagnaia was out of sequence in the order due to work on his bike. He slotted in second after his first lap as other riders started their second run at that moment. Out of nowhere, Bastianini set a solid lap of 1m28.772s to take MotoGP pole in Austrian GP.

Bagnaia remained in second as he leapfrogged Miller in the process, while Pramc’s Jorge Martin made it a Ducati 1-2-3-4. Yamaha’s Quartararo ended up fifth from Pramac’s Zarco, with Aprilia’s Maverick Vinales ending up seventh to beat his teammate.

Espargaro slotted in ninth behind Suzuki’s Joan Mir, after the former’s lap was deleted due to track limits. Gresini’s di Giannantonio was 10th from Suzuki’s Alex Rins and KTM’s Brad Binder.