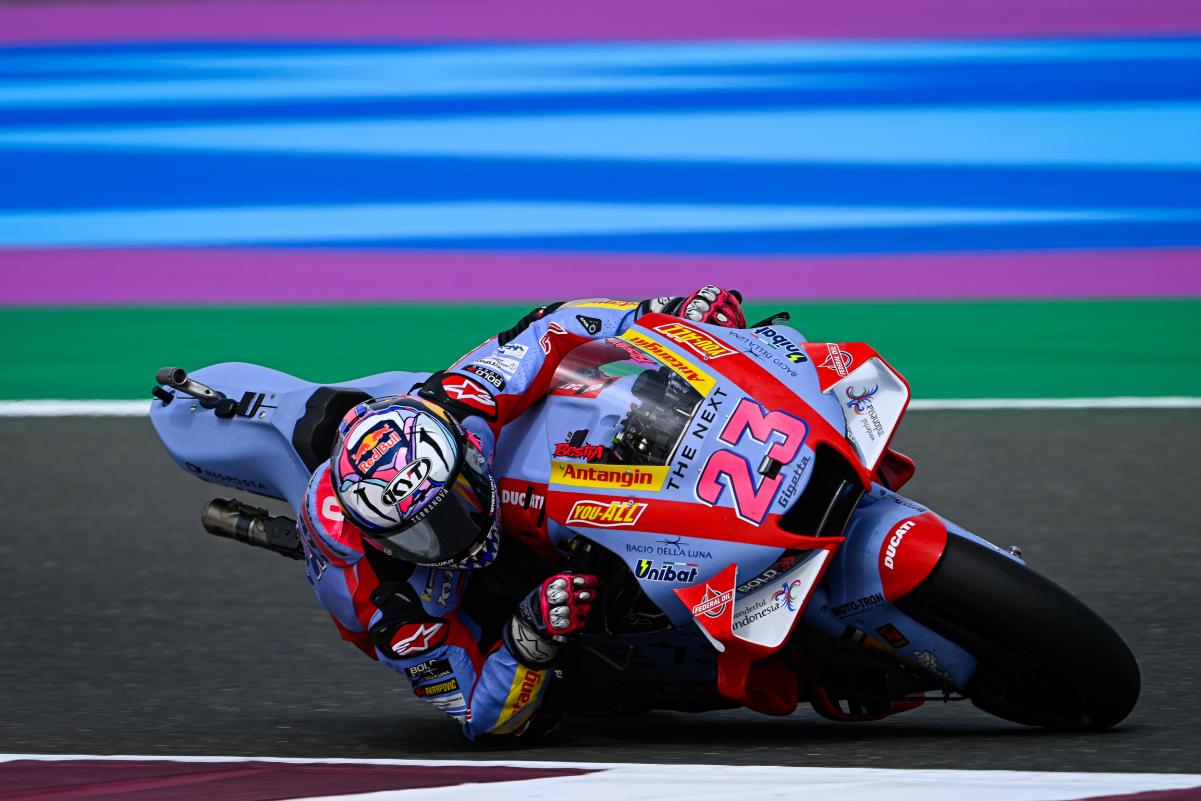 Enea Bastianini fought back to open 2022 MotoGP season with a fantastic win in Qatar GP from Brad Binder and Pol Espargaro.

A bad start from pole-sitter Jorge Martin in MotoGP Qatar GP abode his Pramac Ducati saw him drop down the order as Honda ended up 1-2 with Pol Espargaro leading Marc Marquez, as KTM’s Brad Binder moved up to third after a good start from him.

Not just Martin but fellow front-row starter Enea Bastianini was fourth in his Gresini Ducati ahead of Suzuki’s Joan Mir in the Top 5. Aprilia’s Aleix Espargaro was sixth from Yamaha’s Fabio Quartararo with Martin slotting in eighth after Lap 1.

Suzuki’s Alex Rins was ninth from Ducati’s Jack Miller in the Top 10 as teammate Francesco Bagnaia dropped outside the Top 15 along with Yamaha’s Franco Morbidelli. At the front, Espargaro continued to lead from Marquez, but Binder stayed on them.

A wide moment from Marquez at Turn 1 allowed Binder to take second as the Honda rider came under pressure from Bastianini who cleared Mir early on. The Gresini rider eventually made the move to take third and get himself back onto the podium.

Marquez stood fourth from A Espargaro who won the battle against Mir. His Suzuki teammate Mir was seventh after winning the battle against Quartararo. After looking well early on, the reigning MotoGP champion dropped to 10th midway in the grand prix.

Not just Rins, both Martin and Bagnaia cleared him to be eighth and ninth where the latter climbed his way back into the Top 10. As the race progressed, the retirement list started to fill up with VR46 Ducati’s Marco Bezzecchi first to crash out from the grand prix.

He was followed by LCR Honda’s Alex Marquez and KTM’s Miguel Oliveira, with Ducati’s Jack Miller retiring due to a suspected electronics issue. The Australian was furious inside his garage as factory Ducati’s day ended in a misery after another accident.

While trying a move on Martin, Bagnaia slipped in the inside at Turn 1 and took Martin along with him to retire from the grand prix. The Italian accepted his mistake and went to quickly apologise to the Spaniard while both stood on the gravel trap.

Amid all this, Espargaro continued to lead the Qatar MotoGP comfortably, as Binder started to come under pressure from Bastianini. They were joined by Marquez in the battle with A Espargaro not far off in the Top 5 from Mir who had a good gap over Rins.

Quartararo was eighth after benefiting from the earlier crash as Pramac’s Johann Zarco and LCR’s Takaaki Nakagami rounded out the Top 10. The rest of the points position had Morbidelli in 11th from Aprilia’s Maverick Vinales, VR46’s Luca Marini, RNF Yamaha’s Andrea Dovizioso and Tech 3 KTM’s Remy Gardner.

Going back to the front, while Espargaro led the way, Bastianini managed to go past Binder for second and despite some wide moments, he kept the place and started to catch the Honda rider ahead. The South African had Marquez on his tail but not for long.

The Spaniard soon came under pressure from A Espagraro who finally got him for fourth. While this happened, Bastianini popped in the fastest lap to bridge down the gap to P Espargaro and was right on his tail with five laps remaining in the grand prix.

Bastianini wasted no time to clear Espargaro on the main straight as the Honda rider went wide at Turn 1 for Binder to clear him for second. The Gresini rider just to hold on until the end to register their first-ever win as a full-time MotoGP outfit.

Having parted ways with Aprilia to become a sole independent team, Bastianini led them to their and his first MotoGP win on a 2021 Ducati machine. Binder was second from P Esapargaro who kept his brother Aleix behind to complete the podium.

Marquez was fifth from Suzuki pair of Mir and Rins, with Quartararo losing eighth on the finish line from Zarco – separated by just 0.007s – as Nakagami rounded the Top 10. Morbidelli slotted in 11th from Vinales, who he replaced at Yamaha.

Marini ended up 13th from Dovizioso and Gardner in the Top 15, as RNF’s Darryn Binder missed on points by 0.012s in 16th. While his teammate won, Fabio di Gianantonio was 17th ahead of Tech 3’s Raul Fernandez among the 18 finishers.