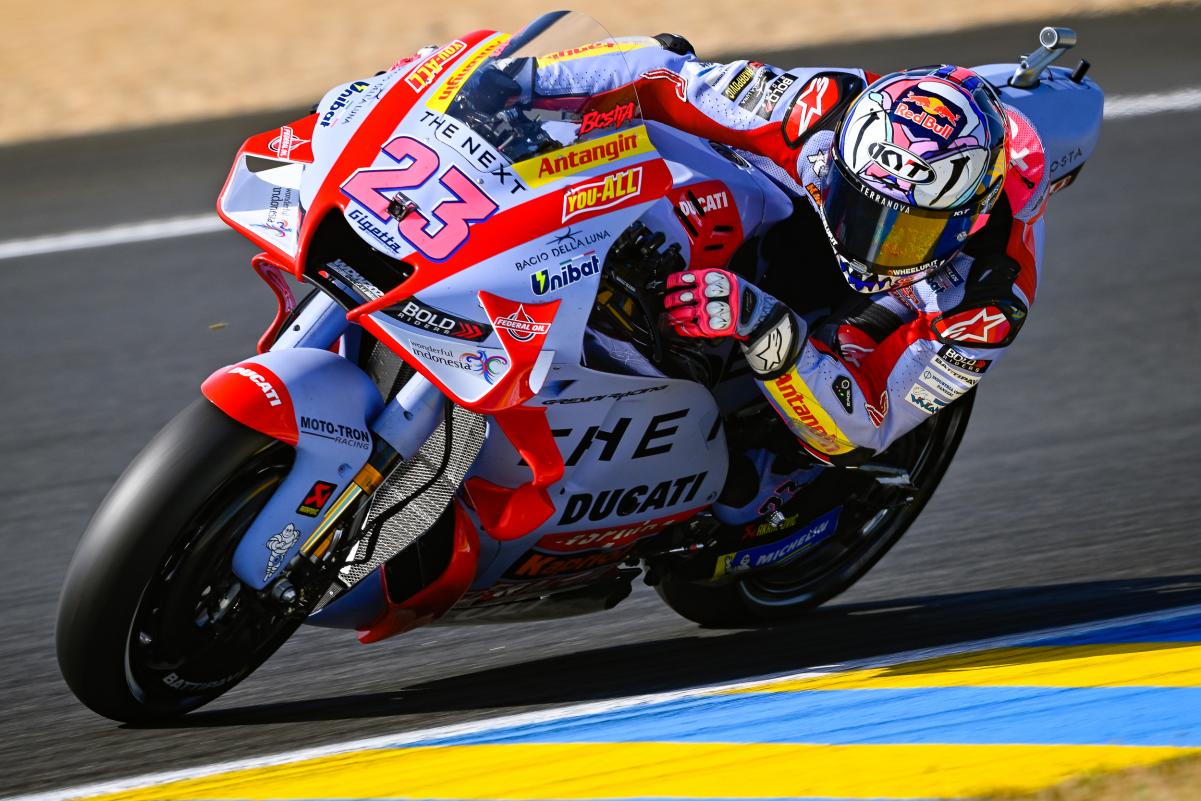 Enea Bastianini fought through to win MotoGP race in French GP with Jack Miller in second from Aleix Espargaro.

Jack Miller took control of MotoGP French GP at the start from Ducati teammate and pole-sitter Francesco Bagnaia where the latter dropped to third initially but was second by the end of the first lap. Suzuki’s Alex Rins slotted in third behind the Ducati pair.

Gresini Ducati’s Enea Bastianini was fourth from Suzuki’s Joan Mir as Aprilia’s Aleix Espargarop dropped to sixth due to a moment at the start. Honda’s Marc Marquez was seventh from LCR Honda’s Takaaki Nakagami, both gaining on Yamaha’s Fabio Quartararo.

Pramac Ducati’s Johann Zarco was 10th but he had a hefty battle against Nakagami, Quartararo and even KTM’s Brad Binder. While the Japanese rider had to take the gravel route, moments later Zarco and Binder made contact, with the KTM shedding carbon.

They all continued on as up front Rins crashed after a wide moment on the gravel. He managed to get back up but was forced to retire eventually. Tech 3 KTM pair of Remy Gardner and Raul Fernandez also retired in separate incidents later on.

At the front, a moment from Miller allowed Bagnaia to get alongside and pass him for the French GP lead as Bastianini slotted in third from Mir and Espargaro in the Top 5. Quartararo climbed back up to sixth from Marquez and Zarco.

While Bagnaia managed to eke out some lead, Miller came under pressure from Bastianini for second and he made it stick to take it from him. Behind, a crash for Mir allowed Espargaro to be fourth with Quartararo in fifth from Marquez.

A crash for Martin allowed both the KTM riders to be in the Top 10. But up front, Bastianini started to pile on the pressure on Bagnaia. Lap after lap, the Gresini rider started to press on the Ducati man and he eventually made the pass on him.

But Bagnaia got back onto him to retake the lead. However, a wide moment on the braking point allowed Bastianini to not only take a lead but a comfortable one. A crash for Bagnaia sealed the deal where he lost his front end and slipped through.

Bastianini then had a comfortable lead from Miller, while Espargaro in third had Quartararo on his tail for the final place on the podium. Zarco was fifth at a distant with Marquez sixth, Nakagami seventh, Binder eighth, Oliveira ninth and Espargaro 10th.

It was a clean MotoGP win for Bastianini in the end, taking the chequered flag first in French GP from Miller and Espargaro, who held off the late charge from Quartararo. For the Frenchman, it was crucial points to continue to lead the standings.

Fellow countryman Zarco was fifth with Marquez sixth ahead of Nakagami, Binder, Marini and Aprilia’s Maverick Vinales in the Top 10 whereby Oliveira had a late crash. Espargaro had to take an avoiding action which dropped him to 11th.