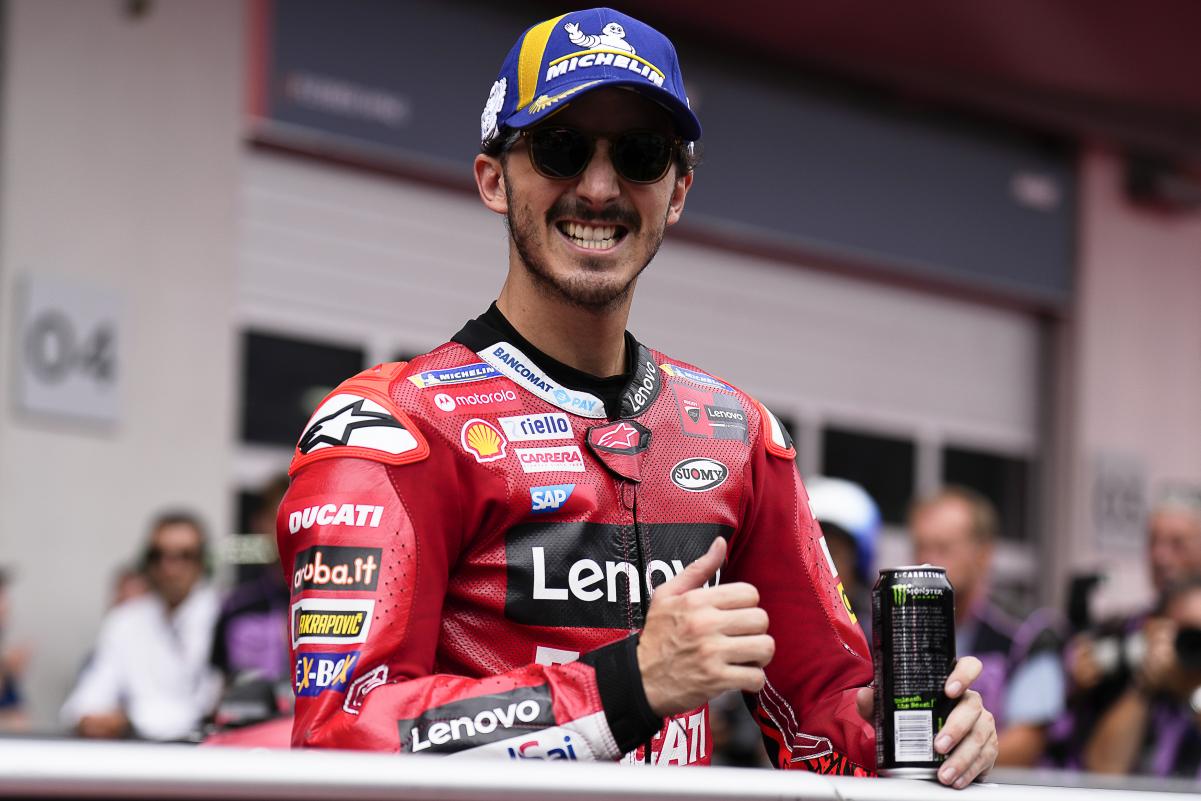 Francesco Bagnaia eased to win his third MotoGP race in a row in Austrian GP from Fabio Quartararo and Jack Miller.

Pramac Ducati’s Jorge Martin was on the tail of the Top 3, with Yamaha’s Fabio Quartararo in fifth from Aprilia’s Maverick Vinales. VR46 Ducati’s Luca Marini made up good amount of places to be seventh from slow starter Aprilia’s Aleix Espargaro.

Pramac’s Johann Zarco was ninth from Suzuki’s Alex Rins in the Top 10. His teammate Joan Mir had an early crash to retire from the race, as at the front, Miller made a move on Bastianini to be second. The Italian then came under pressure from Martin.

The duo passed each other for couple of times but a problem for Bastainini ended his race. He slowed at Turn 3 which affected Zarco as he dropped some places. Just before that, Vinales had a wide moment to drop to eighth and behind this pack.

Joining the retirement list were Tech 3 KTM’s Remy Gardner and LCR Honda’s Takaaki Nakagmi after their respective crashes. Meanwhile, at the front, once Miller passed Bastianini, he started to chase down Ducati teammate Bagnaia.

The two went wheel-to-wheel couple of times but Bagnaia stayed ahead of Miller, with Martin not far behind in this battle. Quartararo was fourth from Espargaro, who moved himself up to fifth. Teammate Vinales was sixth from Marini and Zarco.

Rins was ninth from KTM’s Brad Binder, as the sole Gresini of Fabio di Giannantonio was 11th from VR6’s Marco Bezzecchi. Having run in the points early on after starting from far back, RNF Yamaha’s Darryn Binder ended up in the gravel to retire.

The fight at the front got interesting when Quartararo joined the fray in the chase of Bagnaia who had Miller and Martin not far behind. A wide moment from Martin allowed Quartararo to sneak past him for third as he dropped behind the Frenchman.

With only few laps remaining, Bagnaia had a comfortable lead but Miller started to come under pressure from Quartararo and Martin. They came close to each other and the Frenchman made a bold move on the inside to take second.

Miller almost lost to Martin in the next few corners but managed to stay ahead for third. Marini passed Espargaro for fifth with Zarco getting through him too, when he came under pressure from Rins and Binder in the fight for track position.

At the front, Bagnaia eased to win his third MotoGP race in a row in Austrian GP with Quartararo in second. Martin tried a late move on Miller but skidded off to drop to 10th after he managed to get back up and re-join the grand prix.

This allowed Marini to be fourth from Zarco, Espargaro, Binder, Rins, Bezzecchi and Martin in the Top 10. Di Giannantonio ended up 11th from KTM’s Miguel Oliveira, Vinales, LCR Honda’s Alex Marquez and RNF’s Andrea Dovizioso in the Top 15.

It was a miss of points for both the Honda riders with Pol Espargaro only 16th and Stefan Bradl just behind him. Tech 3’s Raul Fernandez was 18th from Aprilia’s Lorenzo Savadori, as Tech 3’s Gardner re-joined the race to be classified in 20th.

But a particular Yamaha that made them sweat 👀#AustrianGP 🇦🇹 pic.twitter.com/KC5faxMUGE