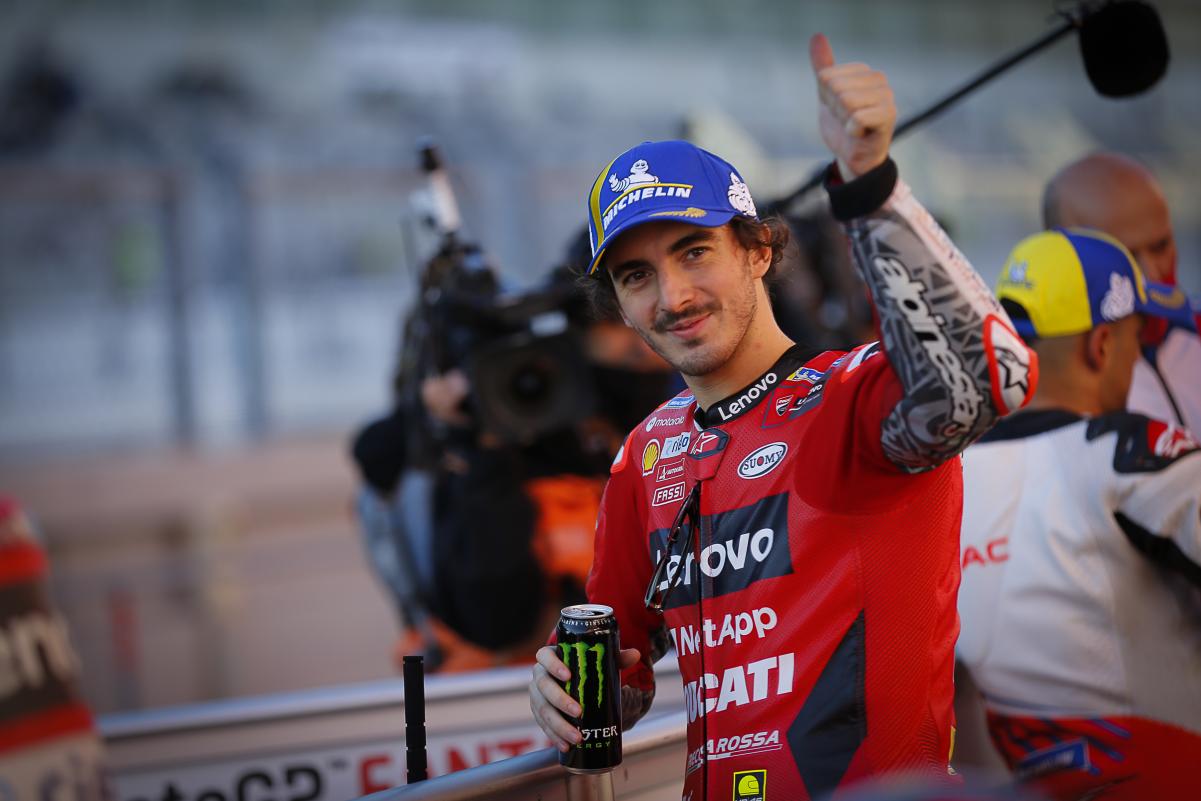 Ducati’s Francesco Bagnaia led from the start to finish to win MotoGP Algarve GP ahead of Suzuki’s Joan Mir and other Ducati of Jack Miller.

Having had a strong start, his teammate Lecuona went wide while battling Martin and Marquez to drop behind Quartararo and Zarco. Having lost out to Marquez early on, it was quite the drop for Espargaro as he ran eighth in the early stages of the grand prix.

Marquez, meanwhile, made more heady to be fourth after winning the battle over Martin. They had Quartararo on their tail in sixth with Zarco behind him in seventh and Espargaro eighth as KTM’s Miguel Oliveira made his way up to ninth from outside the Top 10.

A wild off from Lecuona dropped him to 12th behind Suzuki’s Alex Rins and Avintia Ducati’s Enea Bastianini, as KTM’s Brad Binder was 13th from Yamaha’s Franco Morbidelli and LCR Honda’s Takaaki Nakagami in the Top 15 points position.

As Bagnaia continued to lead Mir and Miller, Marquez steadied in fourth as Martin fended off the charge from 2021 MotoGP champion Quartararo. Aprilia’s Espargaro, meanwhile, had a fall at Turn 1 to retire as teammate Maverick Vinales ran at the fag end of the standings.

There was podium change after Marquez got past Miller at Turn 1 and behind that Quartararo had a wild moment in his chase of Martin which dropped him to seventh and behind Zarco. At the fag end of the Top 10, Rins passed Oliveira for ninth.

At the same time, Binder cleared Lecuona for 12th while Morbidelli had Petronas SRT’s Valentino Rossi and Honda’s Stefan Bradl in chase for 15th. At the front, Bagnaia had a comfortable lead over Mir, but Marquez came under pressure from Miller.

Despite attempts from the Australian, the Spaniard carried on in third. Just behind them Martin was fifth leading Zarco, Quartararo and Espargaro. The Yamaha rider did get through the Pramac man, but the latter came back on him to retake sixth.

In fact, Zarco got Martin for fifth at Turn 1 who then lost out to Quartararo too. But not for long as the Frenchman crashed out at Turn 5 after losing the front-end to have his first DNF of the 2021 MotoGP season. His first as well after being crowned as the champion.

In that melee, Espargaro got through Martin for sixth as Rins was eighth from Bastianini who cleared Oliveira in the Top 10. Lecuona was 11th from Binder with Nakagami 13th, Avintia’s Luca Marini 14th and Morbidelli rounding the Top 15.

As the fight continued on, the race ended under red flag after a crash between Lecuona and Oliveira. Replays showed the Spaniard going the inside of the Portuguese but he slipped and took him into the gravel with the latter visibly hurt.

The race ended with a lap to go and the results taken on for Lap 23 as Bagnaia took the MotoGP win in Algarve GP from Mir and Miller, who passed Marquez late in the race. The 1-3 result sealed the constructors’ championship for Ducati.

Zarco was fifth which helped secure the Independent MotoGP title, as Martin was sixth from Espargaro, Rins, Bastianini and Binder in the Top 10. Nakagami moved up to 11th with Marini 12th as Rossi was 13th from teammate Andrea Dovizioso and Bradl in the Top 15.

Vinales missed out on points in 16th as Morbidelli dropped back to 17th. DNF: Oliveira, Lecuona, Quartararo, Espargaro, Petrucci.