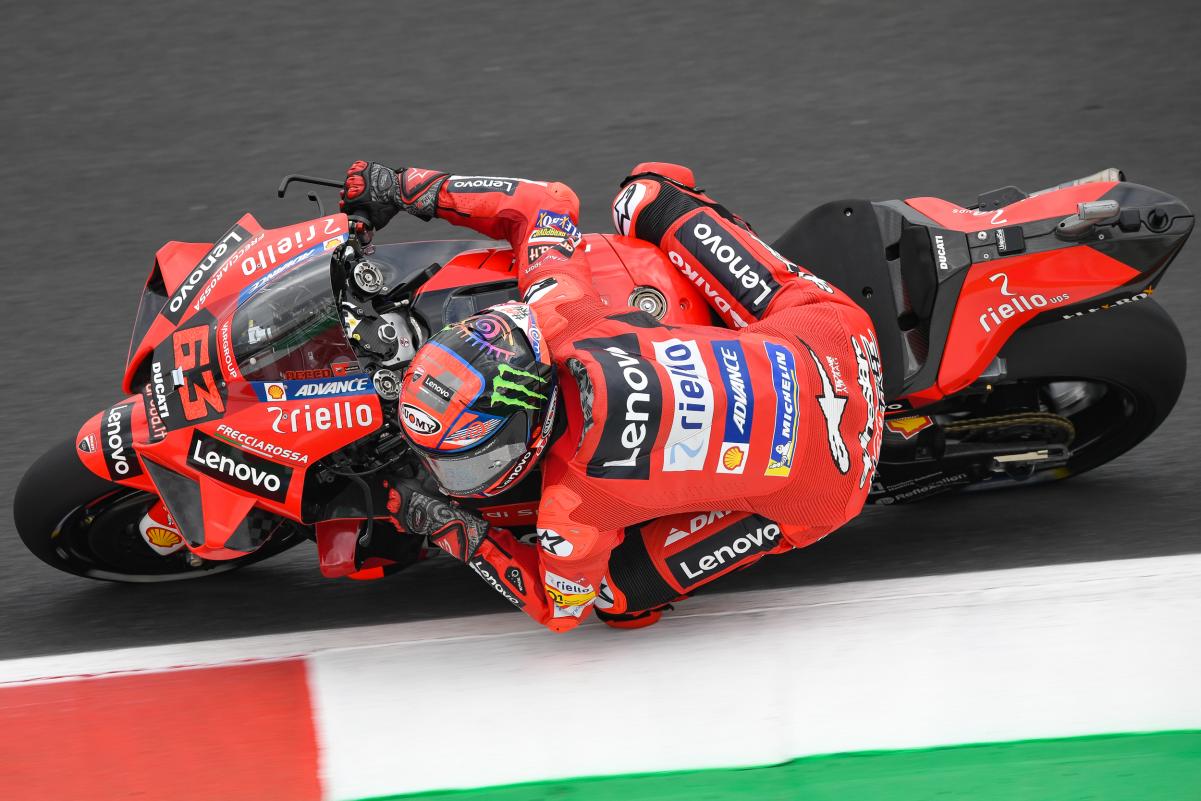 Ducati ended up in yet another 1-2 with Francesco Bagnaia taking MotoGP pole in San Marino GP from Jack Miller and Yamaha’s Fabio Quartararo.

The first part in MotoGP San Marino GP saw Avintia Ducato’s Enea Bastianini lead the way with a 1m31.876s lap, with Yamaha’s Franco Morbidelli in second with a 1m32.296s lap. The two Hondas were behind with Marc Marquez ahead of LCR’s Takaaki Nakagami.

KTM’s Brad Binder did well in fifth as Petronas SRT’s Valentino Rossi’s run ended early after a fall due to tyre temperature. The second run saw more dramas with the South African crashing at Turn 2, while Nakagami had his fall at Turn 9 on the same lap.

It hampered some of the riders’ laps, but they had time for the last ditch effort too. By the end, Bastianini’s first lap was enough to set him through to Q2. There was small drama on his end too, as he fell on his slow in-lap. He managed to get up and get back to the pitlane.

Marquez, meanwhile, displaced Morbidelli to make it into Q2 with a 1m32.029s. Despite his crash, Nakagami was third, to start 13th ahead of Ducati wildcard Michele Pirro and Avintia’s Luca Marini, as Morbidelli dropped down to 16th in the order.

The second part in MotoGP San Marino GP saw a hefty fight at the front. After Aprilia’s Aleix Espargaro set the pace early on, the first run had Yamaha’s Fabio Quartararo lead the way with a 1m31.367s lap from Ducati’s Francesco Bagnaia and Pramac Ducati’s Jorge Martin.

Espargaro dropped to fifth behind Marquez. The two did not have a great second run, as both crashed out within seconds of each other. The latter went down first, with the former going down next. Bastianini, meanwhile, had his fast lap deleted to drop to the back.

At the front, though, Bagnaia thwarted Quartararo’s lap with a 1m31.065s to clinch MotoGP pole in San Marino GP and lead a Ducati 1-2, with Miller in second. The Yamaha rider ended up third in the order, but went down before he could push for his final attempt.

Martin was fourth from teammate Johann Zarco as Honda’s Pol Espargaro ended up sixth ahead of teammate Marquez. The other Espargaro was seventh from Suzuki’s Alex Rins, as Maverick Vinales did well abode the Aprilia to be 10th.

Suzuki’s Joan Mir was 11th, but was furious with his team due to miss-communication, as Bastianini couldn’t improve on his earlier time to be 12th.