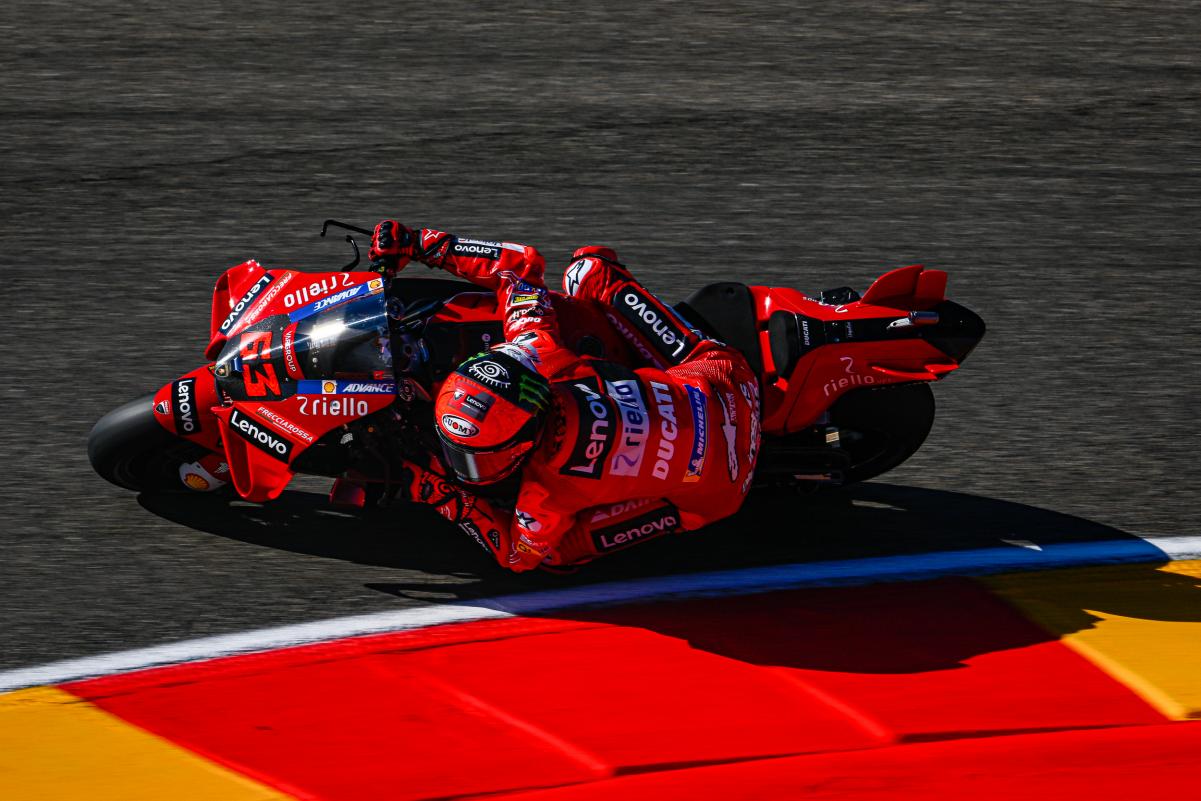 It was Ducati 1-2-3 finish as Francesco Bagnaia took MotoGP pole in Aragon GP from Jack Miller and Enea Bastianini.

The first part in MotoGP qualifying in Aragon GP saw Honda’s Marc Marquez led the way with a 1m46.909s at the halfway mark from Aprilia’s Aleix Espargaro, who had multiple incidents early on – one of which was put under investigation.

The first one was with Marquez where the two waited for each other to get a tow, while the other was when Espargaro went wide and re-joined as Gresini Ducati’s Fabio di Giannantonio arrived at the scene in the left-hand corner.

Behind the Top 2, VR46 Ducati’s Luca Marini was hot on heels in third from di Giannantonio and Pramac Ducati’s Johann Zarco. The second run started with a disaster for Aprilia’s Maverick Vinales, who crashed out leaving him with little time to return.

His teammate Espargaro set the pace with a 1m46.569s lap to make it into Q2 along with Zarco in second, as Marquez ended up third to start his MotoGP return from 13th. Marini was 14th with di Giannantonio in 15th from Vinales, whose lap hung on.

LCR Honda’s Alex Marquez was 17th from Honda’s Pol Espargaro who had a late crash. The returning Cal Crutchlow was 19th in his RNF Yamaha, with Yamaha’s Franco Morbidelli 20th, Tech 3 KTM pair Raul Fernandez & Remy Gardner in 21st & 22nd and RNF’s Darryn Binder in 23rd, as Suzuki’s Joan Mir pulled out of the weekend due to consistent pain.

The second part in MotoGP qualifying in Aragon GP saw Gresini’s Enea Bastianini set the pace with a 1m46.580s lap to lead the way by nearly half a second from Ducati’s Francesco Bagnaia, while Jack Miller slotted in third to complete the front row.

KTM’s Brad Binder did well in fourth from Suzuki’s Alex Rins, as Yamaha’s Fabio Quartararo was only seventh after his first run. While others pitted, Aprilia’s Espargaro went out of sequence for his final run when no one was on track at Aragon.

The second run from Bagnaia was on pace to take MotoGP pole in Aragon GP with a 1m46.069s lap to lead Ducati teammate Miller, as Bastianini dropped to third despite mini improvement. Espargaro slotted in fourth after his out of sequence run.

Zarco was fifth from Quartararo, who survived a crash scare while looking for that extra lap time. VR46’s Marco Bezzecchi was seventh from Pramac’s Jorge Martin. lone Suzuki of Rins, the KTM pair of Binder & Miguel Oliveira and LCR’s Takaaki Nakagami in Top 12.

The lap record is smashed by 3 tenths! 👊