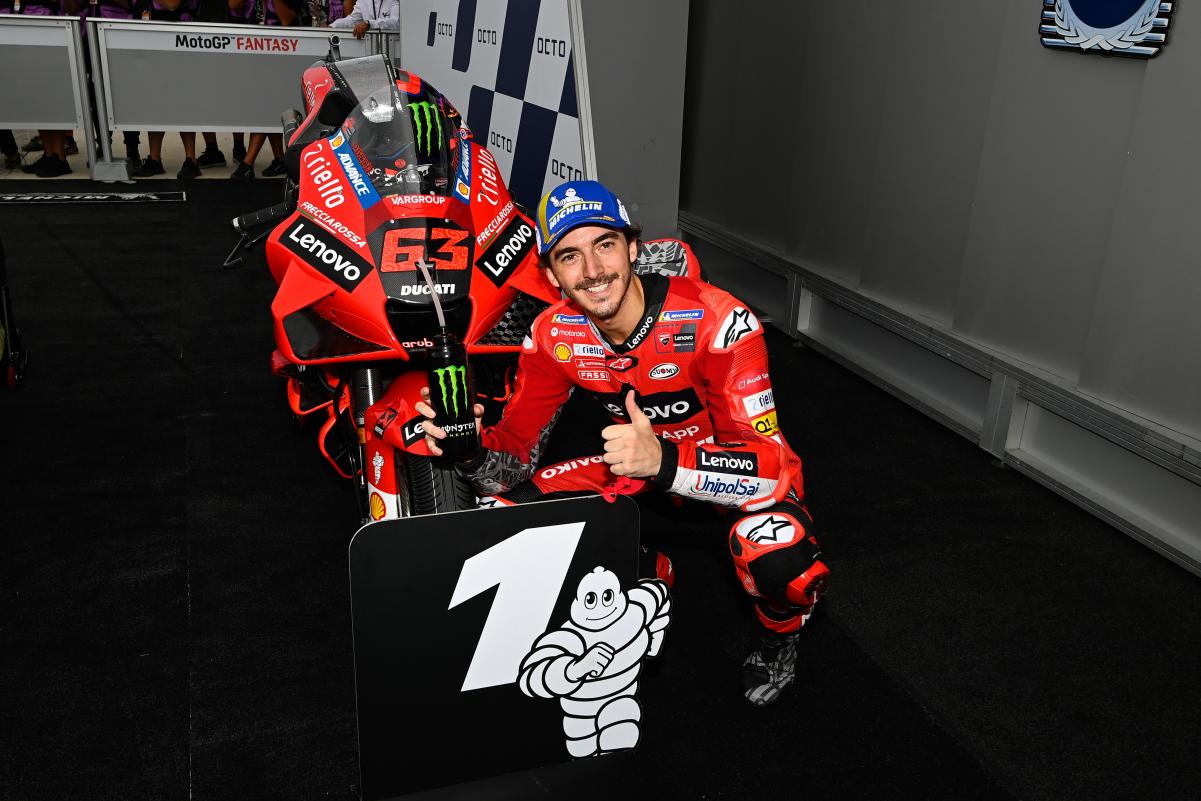 Despite the cloudy conditions and bit of rain, the MotoGP San Marino GP started off with riders on the slick tyres as pole-sitter Francesco Bagnaia led the way from Ducati teammate Jack Miller and Yamaha’s Fabio Quartararo.

Honda’s Marc Marquez was fourth from Pramac Ducati’s Jorge Martin, as the two Espargaro brothers followed with Aprilia’s Aleix ahead of Honda’s Pol. The Top 10 had Suzuki’s Alex Rins and Joan Mir sandwiching Avintia Ducati’s Enea Bastianini in between.

The Italian, though, was on charge as he moved himself up to fourth after clearing multiple riders on the way. He was helped by A Espargaro going a bit wide, while Martin crashed out while battling for third with Quartararo, having passed Marquez early on.

At the front, Bagnaia led comfortably from Miller, with the Australian having a wide moment at Turn 13 along with Quartararo to drop off. Bastianini was a solid fourth from Marquez, as Rins cleared A Espargaro to be fifth, while Mir moved up to seventh from P Esaprgaro.

There were multiple Long Gap Penalty for track limits, with Martin, Zarco and Avintia Ducati’s Luca Marini getting one each for shortcut at Turn 1. In fact, the former got it twice after he managed to get going despite his fall early on.

While Bagnaia continued to lead on, Quartararo found pace to clear Miller, who had Bastianini to defend from in the latter stages where Rins joined the two after passing Marquez. In the lower half of Top 15, Lecuona crashed out at Turn 1.

Having looked pretty good for most part of the race, Rins had a horror end with a crash from Top 5. Just ahead, Bastianini continued to pressure Miller and eventually made it through him to take third, as Quartararo started to hustle Bagnaia for the lead.

It was a hard chase for Quartararo, but Bagnaia had just about enough to register his second consecutive MotoGP win, this time on home soil in San Marino GP, as the Frenchman kept his points advantage over the Italian with a second place finish.

Bastianini had his first MotoGP podium finish in third, as Marquez won the battle against Miller to take fourth on the final lap. The Australian lost to Mir as well, who was fifth. But he got it back after the Suzuki rider was handed a 1-place drop for exceeding track limits.

P Espargaro got through Aleix to end up seventh, as Binder fought his way through to ninth from Nakagami, Pirro, Zarco and Vinales, who scored his first points for Aprilia in 13th. Honda’s Stefan Bradl was 14th from LCR’s Alex Marquez to round out the Top 15.