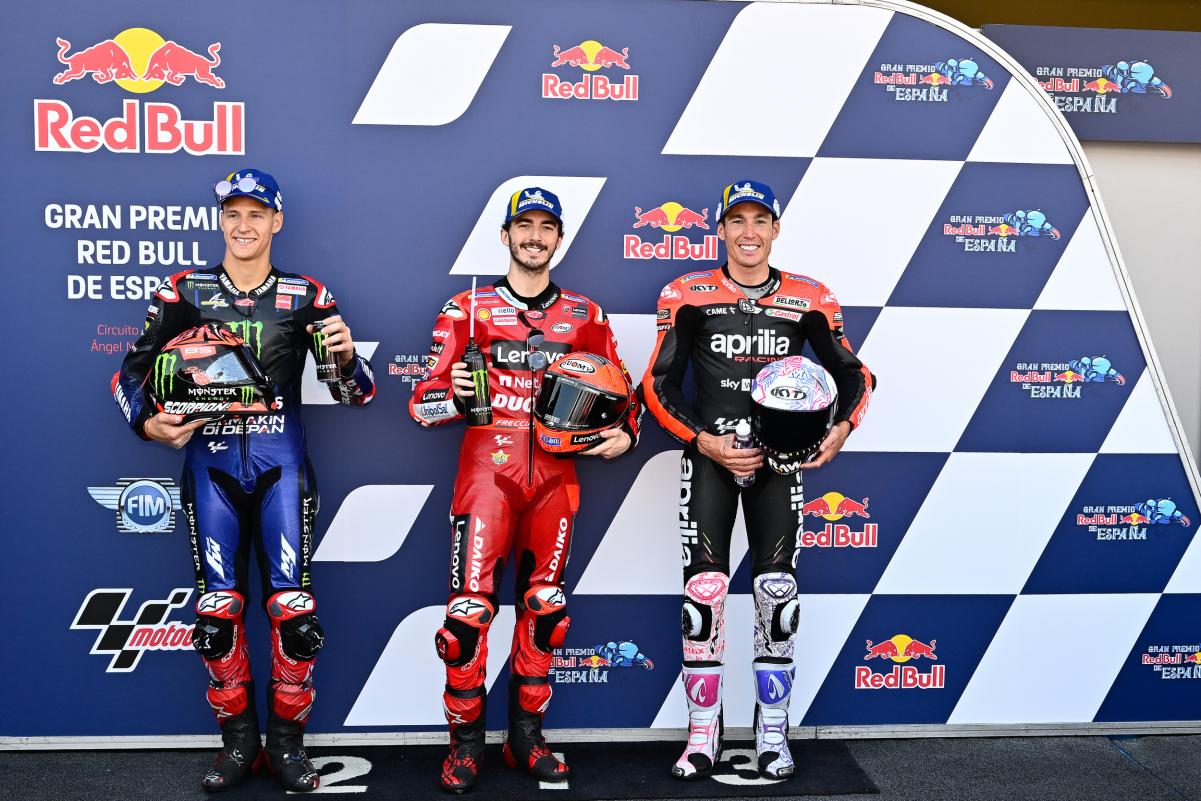 It was a clean start in MotoGP Spanish GP from pole-sitter Francesco Bagnaia onboard his Ducati as he led from Yamaha’s Fabio Quartararo with Ducati’s Jack Miller, LCR Honda’s Takaaki Nakagami and  Honda’s Marc Marquez moving up to third, fourth and fifth.

Aprilia’s Aleix Espargaro dropped to sixth from Suzuki’s Joan Mir, VR46 Ducati’s Marco Bezzecchi, Pramac Ducati’s Johann Zarco and KTM’s Brad Binder in the Top 10. While the Top 2 pressed on along with Miller, there was fight on for fourth.

Nakagami dropped to seventh in the duel with Marquez moving up to fourth, Espargaro in fifth and Mir sixth. As the race progressed, Pramac’s Jorge Martin had a fall along with Honda wildcard entrant Stefan Bradl in separate incidents.

Mir was at a distant sixth with Nakagami on his tail, while Bezzecchi, Binder and Gresini Ducati’s Enea Bastianini rounded out the Top 10 after a crash for Zarco. Honda’s Pol Espargaro was 11th from KTM’s Miguel Oliveira, LCR’s Alex Marquez, VR46’s Luca Marini and Aprilia’s Maverick Vinales in Top 15.

Bradl, meanwhile, was out of the race after a second crash. It was getting intense up the road where Bagnaia continued on to be pressured on by Quartararo, whereas his teammate Miller had Marquez and Espargaro on his tail pretty much all-through.

Marquez eventually got through Miller on the inside in the right-hander and despite attempts from Miller, he couldn’t get through. Espargaro started to put the pressure on the two ahead and a wide moment in the left-hander, allowed him to get through them both.

Replays showed Marquez almost had a crash when turning left but managed to hold on. That moment allowed Miller to get through to fifth. As the trio continued to rally on, Mir joined the party after fending off Nakagami, who was in a lonely seventh.

At the front, Bagnaia managed to hold off Quartararo to win MotoGP Spanish GP as Espargaro rounded out the Top 3 in the same way as they started. Marquez eventually passed Miller on the final lap to fourth with Mir ending up in sixth.

Nakagami was seventh in a distant from Bastianini who cleared Bezzecchi to be eighth, as Binder was 10th from Espargaro, Oliveira, Marquez, Vinales and Yamaha’s Franco Morbidelli in the points scoring position in the Top 15.

Marini dropped outside the points to be 16th with RNF’s Andrea Dovizioso 17th and Gresini’s Fabio di Ginannantonio 18th as Suzuki’s Alex Rins could only recover to 19th after a wide moment on the gravel early on.