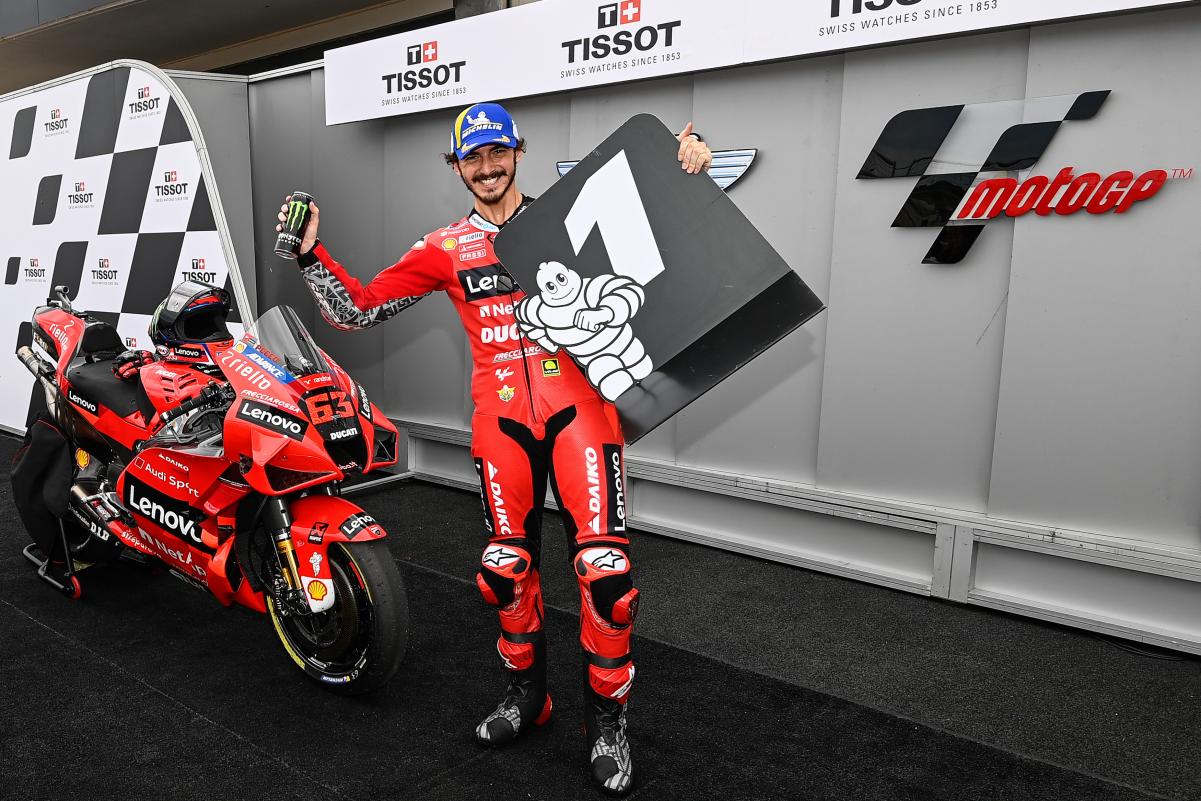 Pole-sitter Francesco Bagnaia had a good getaway in MotoGP Aragon GP abode his Ducati to lead the way as teammate Jack Miller dropped back to third after a speedy start from Honda’s Marc Marquez, who jumped up to second from the second row of the grid.

Aprilia’s Aleix Espargaro had a good start too, to be fourth with Suzuki’s Joan Mir and Pramac Ducati’s Jorge Martin in fifth and sixth, after the duo managed to clear Yamaha’s Fabio Quartararo. Having run in the Top 10 early on, Honda’s Pol Espargaro dropped back.

Tech 3 KTM’s Iker Lecuona was on the move as he made it up to eighth in the early part, bring KTM’s Brad Binder along with him, as Avintia Ducati’s Enea Bastianini stood 10th. Another mover was Suzuki’s Alex Rins, who was 12th after starting on 20th.

He had LCR Honda’s Takaaki Nakagami on his sights, as Espargaro was 13th from KTM’s Miguel Oliveira and Pramac Ducati’s Johann Zarco in the points position. The early part also caught out LCR Honda’s Alex Marquez and Petronas SRT’s Jake Dixon.

As Marquez hustled Bagnaia at the front, MotoGP points leader Quartararo dropped behind Lecuona and Binder to ninth, with Bastianini chasing the Frenchman. There was also a mistake from Miller, who went wide in the left-hander, dropping to fifth.

Espargaro leapt to third from Mir, but the Suzuki rider made a quick work of the Aprilia man to take third. Behind this pace, there were multiple riders fighting for track position, with Martin defending sixth from Lecuona and Binder.

At the same time, Bastianini and Nakagami tussled for 10th, which allowed Quartararo hang on to ninth. While the Italian managed to fend of the Japanese rider, Lecuona lost out and dropped to 11th, whereas Binder cleared Martin for seventh.

At the front, it was getting tasty between Bagnaia and Marquez, as the Spaniard started to look-in for a move on the Ducati rider. The Honda man had his first try with three laps remaining, but the Italian had it under control to maintain his lead.

Marquez tried for multiple times to pass Bagnaia. He succeeded too, but went wide in those moments, which allowed the Italian to retake the lead. The last straw was a bigger wide moment for the Honda rider, which helped the Italian to win the Aragon GP.

In doing so, Bagnaia scored his first MotoGP win, defying Marquez in his home GP, as Mir completed the podium from Espargaro and Miller. A spirited late surge helped Bastianini to end up sixth, having passed Binder and Quartararo.

The Frenchman salvaged eighth after clearing Martin later in the race, with Nakagami in 10th from Lecuona, Rins, Espargaro, Oliveira and Tech 3 KTM’s Danilo Petrucci in the Top 15, who passed a struggling Zarco towards the end.

In fact, he was also passed by Yamaha’s Cal Crutchlow for 16th, as Maverick Vinales was 18th on his Aprilia MotoGP debut ahead of Petronas SRT’s Valentino Rossi and Avintia Ducati’s Luca Marini. DNF: Dixon, Marquez.