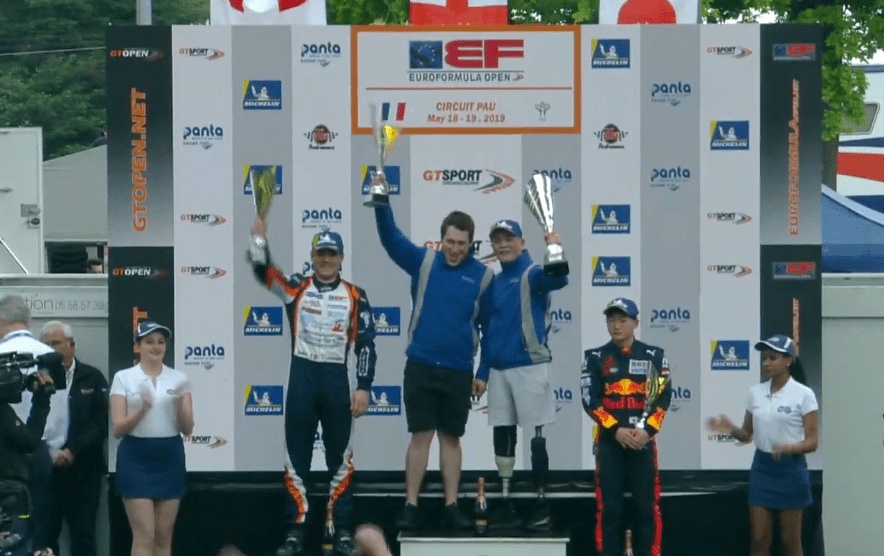 Carlin’s Billy Monger fought his way through the pack to win Pau GP and his first in Euroformula Open (EF Open) after leaders collided at a wet track.

The wet conditions made it tricky for the teams and the drivers at the start of the Race 2 of 2019 EF Open championship’s Pau weekend. Everybody started the formation lap on the slick compound but it started to spit just as they set off.

This prompted three drivers to pit after the formation lap to change to the wet compound which included the 11th placed starter Monger. He dropped to the back of the field as a result to start the race but was on the right compound for the grand prix.

At the front, pole-sitter and Motopark’s Julian Hanses led the way from Red Bull junior and teammate Yuki Tsunoda. A safety car though brought Monger and Carlin teammate Nicolai Kjaergaard back into the game as they slotted to the back of the field.

It took some time for the wet compound to get up to speed but once it did, Monger wasted no time to get himself inside the Top 5. With the conditions not hugely improving, Monger caught the back of the four Motopark drivers in a matter of few laps.

He cleared Marino Sato first after which he took on Tsunoda, after the Japanese lost out to fellow Red Bull driver Liam Lawson. With Lawson pushing Hanses hard, the two made a collision when the Australian tried a move on the German in the chicane.

Lawson made the same move in the same corner on Tsunoda which worked, but against Hanses, it didn’t as the kerb on the inside launched Lawson into Hanses with the two ending up into the barrier as Monger took the race lead.

It was also his first EF Open win after a slow start to the season with a best of ninth in the three races before Race 2. It propelled Monger to sixth in the standings with 29 points as Lawson leads the pack with 64 to his name despite the non-finish.

With Monger taking the win, he led a Carlin 1-2 as Kjaergaard was second with Tsunoda rounding out the podium positions. Behind, Teo Martin Motorsport’s Lukas Dunner and Carlin’s Christian Hahn completed the Top 5 for Race 2.