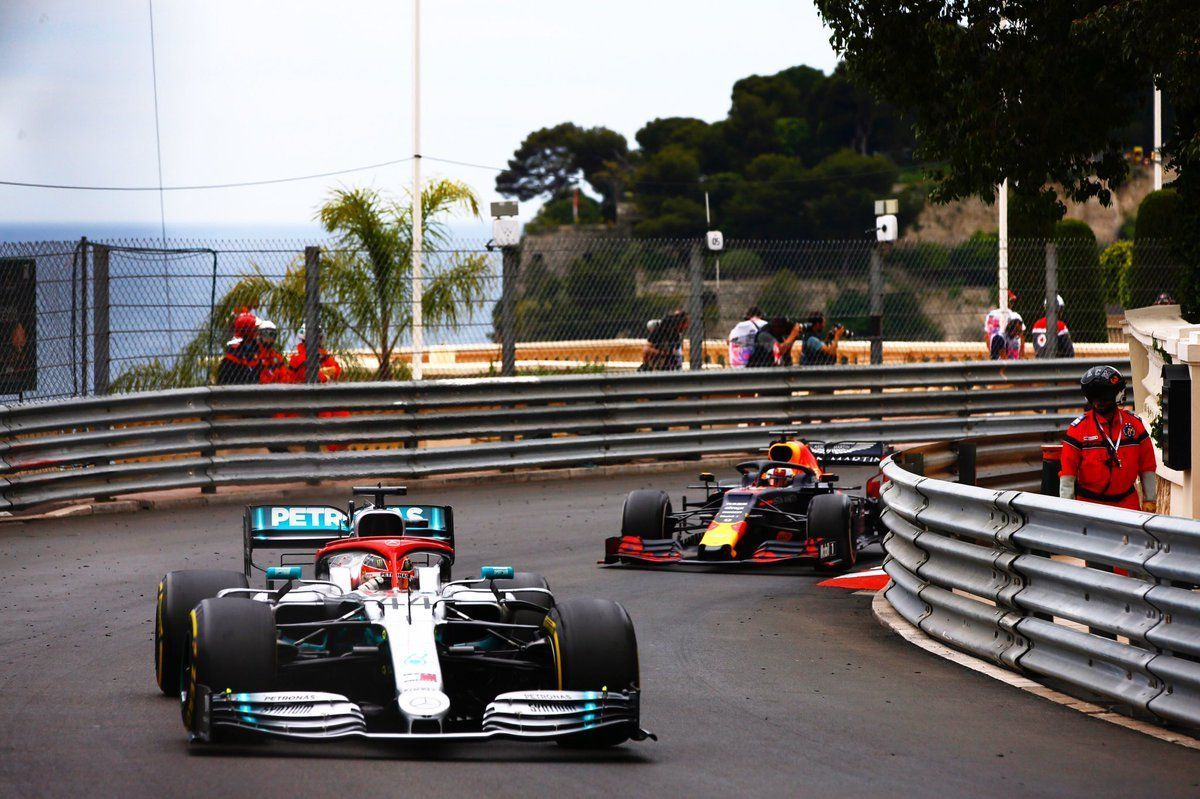 Mercedes’ Lewis Hamilton took the win in F1 Monaco GP after holding off Red Bull Racing’s Max Verstappen to the line even though the Dutchman had a penalty.

Both Mercedes started the F1 Monaco GP at Monte Carlo well with Lewis Hamilton leading Valtteri Bottas. The Finn had Red Bull Racing’s Max Verstappen at his side for a brief moment but Bottas held on with Verstappen third and Ferrari’s Sebastian Vettel fourth.

Renault’s Daniel Ricciardo was best of the rest in fifth after he managed to get ahead of Haas Kevin Magnussen at the start. Red Bull Racing’s Pierre Gasly was seventh with McLaren’s Carlos Sainz in eighth but Toro Ross’s Daniil Kvyat losing out in ninth.

His teammate Alexander Albon sat at 10th. At the back, there was a small contact between Alfa Romeo Racing’s Kimi Raikkonen and Racing Point’s Sergio Perez as Ferrari’s Charles Leclerc pushed from 15th to make places after bad qualifying.

His charge didn’t last long as after getting Haas’ Romain Grosjean, when he tried a move on Renault’s Nico Hulkenberg at La Rascasse, the Monegasque hit the right barrier which caused a puncture to his right-rear tyre as he limped back into the pits.

The debris was too much though as the safety car was deployed which forced many to pit. Hamilton came in and left on the medium but there was an unsafe release by Red Bull for Verstappen when he was put in the way of Bottas as they both touched.

Bottas lost a place to Verstappen but he then lost to Vettel as well as he was forced to pit again for the hard compound as Mercedes felt there was damage due to the hit. The race was slowed down by Hamilton as he found himself on the medium compound.

At the same time, Verstappen, Vettel and Bottas were all on the hard compound as the Dutchman was given a five second time penalty. Behind, there was more drama on re-start as Alfa Romeo Racing’s Antonio Giovinazzi tapped the back of Williams’ Robert Kubica.

The Italian tried a move on the Polish driver at La Rascasse but spun him around to cause a traffic jam. At the same time, Leclerc decided to retire after a switch to the soft didn’t work. The safety car changed the strategy for the midfield drivers.

While a good chunk didn’t stop but Ricciardo and Magnussen did but it worked against them as they were stuck behind multiple cars while the likes of Sainz, Kvyat and Albon didn’t which got them track position ahead of the early two midfield leaders.

It soon became a procession with Hamilton leading from Verstappen, Vettel and Bottas in a close fight but the British under tremendous pressure being on the medium compound to others on the hard as even a light rain couldn’t help any bit.

Behind, Gasly looked good for fifth as Sainz took the best of the rest mantle from Kvyat and Albon, while a late stop from Grosjean helped him in ninth ahead of Ricciardo in 10th, who had Norris and Magnussen on his tail after Raikkonen’s stop.

The Finn was slowed down earlier by Racing Point’s Lance Stroll as the two did make contact. The Canadian was handed a five second time penalty for cutting a corner to gain advantage as Magnussen was put under investigation for doing the same.

At the front, it started to get tensed with Hamilton pushing all-through to keep Verstappen behind as the Dutchman tried to save his position with Vettel and Bottas close behind. Red Bull, meanwhile, got Gasly in the pits to push for fastest lap.

Verstappen tried a move on multiple occasions but it wasn’t to be as they even made contact at Turn 10 as they were put under investigation. But it didn’t deter Hamilton at all as he held off the challenge from the Dutchman to win the F1 Monaco GP.

He managed to see-through 67 laps on the medium compound while the rest of field behind him were on the hard. Verstappen finished second on the road but his five second penalty meant he dropped to fourth with Vettel second and Bottas third.

Gasly ended up fifth in the end with an extra point for the fastest lap with Sainz finishing as the best of the rest in sixth from Kvyat and Albon as even though Grosjean finished ninth on the road, Ricciardo took it after his lap of 1m15.697s on the final attempt.

The Frenchman’s five second penalty cost him a place in the end as he ended up 10th ahead of McLaren’s Lando Norris with Magnussen in 12th, who had to fend off Perez for long in the grand prix. Hulkenberg was 14th with Williams’ George Russell in 15th.

He finished ahead of Stroll with Raikkonen only 17th from Williams’ Robert Kubica with the Polish gaining a place due to Giovinazzi’s 10 second penalty which dropped him to 19th. Everyone from Magnussen until Kubica was a lap down with Giovinazzi two laps.