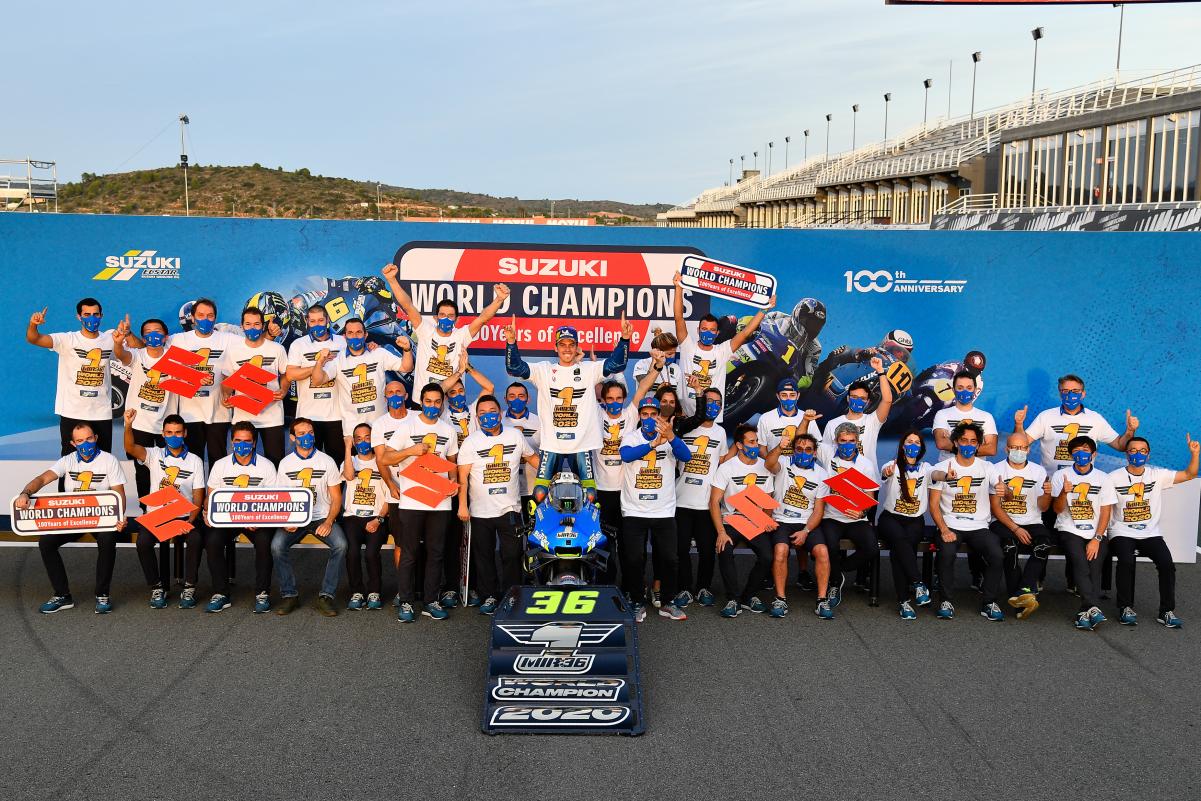 Joan Mir reflected upon the 2020 MotoGP challenge after his win as he spoke on pressure, Suzuki, Marc Marquez & more, while others praise his win.

When the 2020 MotoGP season started, no one had Suzuki’s Mir on their list for even a Top 5 finish but here we are looking at the final weekend with the Spaniard already a champion, taking over the mantle from Marc Marquez, who was out injured.

Mir did not start the 2020 MotoGP season perfectly but hit a purple patch mid-way in the year, which propelled him as a title contender. While he made inroads, the other challengers started to diminish, especially Fabio Quartararo apart from Andrea Dovizioso.

With Yamaha not making much progress, Suzuki got everything right to allow Mir take the lead and eventually seal the deal last weekend in Valencia. Like many of us, the Spaniard never had the championship on his mind as he reflected wholly after the win.

“It is something I have been fighting for all my life, since I was 10 years old,” said Mir in the press conference. “I had this dream on my mind and I didn’t stop until I got this title, so what can I say? I didn’t expect it honestly because I expected it in the future, but we have the title and it is ours.

“I would have said you are crazy [if you told me I would win the title in 2020 after making debut in 2019]. Race by race, year by year I was fast and getting used to the bikes quickly and this made my progression fast, which is the key to being in MotoGP winning the title in the second year.

“It was really difficult but, the thing nobody mentions that was so tough and tricky to understand is the pressure you have here at the track goes away at home because you can disconnect. This year I couldn’t disconnect at home because of the pressure of trying to not get the coronavirus, and this made the situation much more difficult.

“Being consistent in every race was also hard, always being on the podium, I don’t want to mention this race because I struggled the most all year and I had to risk more but we have the title so I don’t care about the race. In the races, I looked calm and without pressure, but I was not calm and I was not without pressure.

“I was super nervous, but the truth is this year was difficult. We didn’t just have pressure on track, we had it at home to not get the virus, so it was especially hard to manage. Thank you to my crew who managed it in the perfect way,” summed up Mir.

Adding more on the 2020 MotoGP season and also his decision to sign with Suzuki, Mir stated: “In Styria, it was the race I was really competitive and fighting for victory but after Misano and Barcelona, that’s when I thought that maybe I am not just fast in Styria, maybe I am able to maintain this feeling with the bike. For me, that was the moment.

“Looking back, we sacrificed a year in Moto2, normally I would do two years in Moto2 but the situation was this. We took the right decision to move to MotoGP. For me, to win a title with every manufacturer is unbelievable, that is the target but I was brave in that moment to go with Suzuki because I didn’t expect this potential on the bike in the second year.

“For me, to win with Suzuki means something more than normal. Actually, I remember the conversation I had with Davide at Jerez in 2018 about this project, and he was trying to convince me but he didn’t need to because I was already sure beforehand. I wanted this project with Suzuki to get to the top because it’s even more tricky to make it but now with one title with this brand makes us even better, they’ve done a great job every year so congratulations to them,” summed up Mir.

As it was showcased post-race, Mir became the first Suzuki champion since 2000 as he joined Barry Sheene, Marco Lucchinelli, Franco Uncini, Kevin Schwantz and Kenny Roberts Jr to have the championship with the Japanese manufacturer. The big achivement was ending Marquez’s reign – even if it happened in his absence.

Mir didn’t think the title’s value was down because of no Marquez. “Marc was in the first race, risking to win and trying to win the championship, and he made a mistake that cost him the season,” he said. “That’s it. That this [Marquez’s absence] detracts from the title?

“Well, it would be necessary to detract from many titles of other riders during history that they won when, in theory, the favourites fell and were not champions. This is part of the game, of the sport and of MotoGP. I do not consider this title has less merit to have achieved it because Marquez is not there when he has been injured,” summed up Mir.

When people asked me if Joan Mir would be a fair champion without winning a race, I answered absolutely YES. Now they will not ask that again…

Here’s how Joan Mir won the 2020 title in Valencia