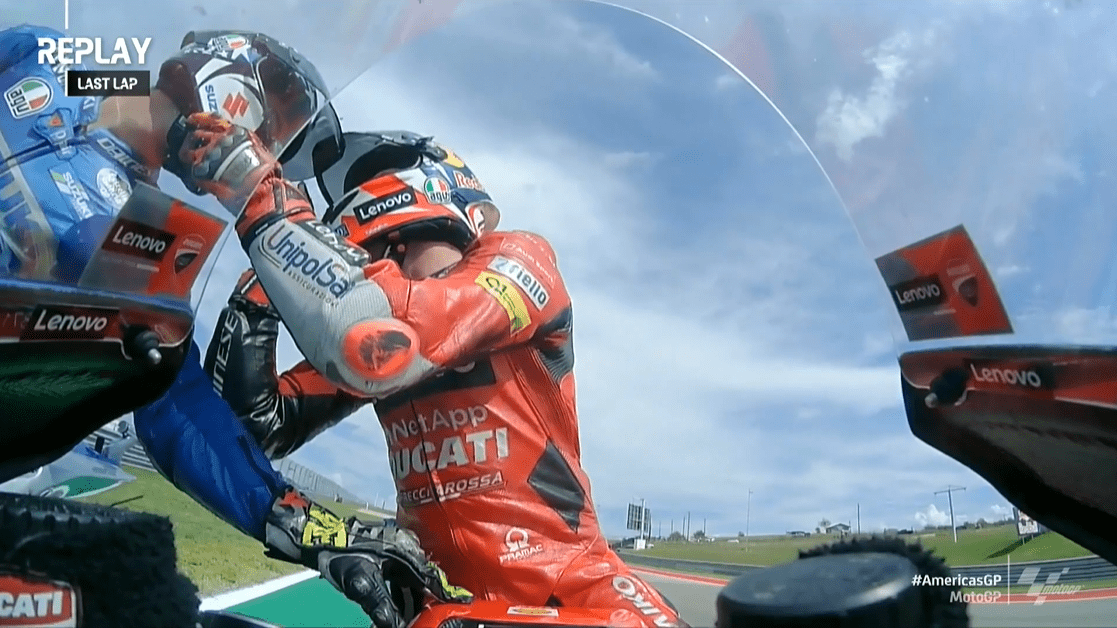 Joan Mir and Jack Miller share their views of their latest run-in towards the end of the MotoGP Americas GP, which was penalised by the stewards.

Suzuki’s Mir and Ducati’s Miller were at loggerhead following their latest run-in during the end stages of the Americas MotoGP race at Circuit of the Americas. It follows from their tussle in Qatar GP and also had some troubles at Misano and Assen.

Miller had initially made his way up the order in Americas GP. He even passed Mir but since the Australian’s pace started to dwindle, he dropped back into the clutches of the Suzuki rider and also Avintia Ducati’s Enea Bastianini.

The Italian made the most of the clash between Mir and Miller, when the former went for move in the left-hander and bumped the latter. This allowed Bastianini to sneak past the duo on the inside and take sixth place from both of the MotoGP riders.

Post-race, Mir was demoted to eighth with Miller ending up seventh. They even had a verbal chat during the cool down lap. Elaborating more to media, the Ducati rider explained his side of things bringing in the past events between the duo.

“I went into the corner, protected my line, everything good and then had a bike in the side of me,” said Miller to media including Motorsport Network, The Race, Crash.net, MotoGP and more. “Got T-boned again.

“It’s two weeks in a row he’s done the same thing and we both lose a position because last time Marc came through and this week Enea. Here, Misano, Assen…  Everytime I race with the guy he runs into the side of me. I think I am one of the fairer guys on the grid. For sure I can be aggressive when I need to be but I try not to run into the side of everybody and do that.

“I will pass, and try to be as clean as possible and sometimes accidents will happen but I’ve lost count how many times this has happened this season. In Misano I went from 4th to 6th, here from 6th to 8th. It doesn’t even make sense for him because he jams himself wide as well that he allows the next guy through.

“I think there are better ways you can go about the situation. That’s the way he wants to ride. All we can do is focus on my job and be in better positions because I was fading at the end of the race. I need to work on not being that guy, I need to be the one attacking. That’s the biggest issue.

“As for the penalty, they pick and choose the punishment that they like. Last week with Aegerter and Torres in MotoE it was a similar thing yet Aegerter got a 30 second penalty or something like that which was the perfect amount to let Torres win the championship. Fortunately for me I was able to stay on the bike.

“I don’t make the rules and I feel like I have controlled myself well. I’m getting older and more mature, that’s a nice sign, I guess you can say,” summed up Miller, as Mir obviously had a different view to the incident and even disagreed with the penalty.

“Well, first of all, I want to apologise because I don’t like to create contact in overtakes,” said Mir. “I did a great manoeuvre in sector one on the chicanes. I was able to overtake him in a really good way, but then we arrived to the straight and he just overtook me and gave me a couple tenths.

“Then he was just closing the lines. He was just not caring about riding. He was just inside the corner, almost straight… He was closing the lines, but it was a little bit strange. Turn 16, the left, is a good corner to overtake. I took the inside and on the second part of the braking he just made a really, really tight line that I didn’t expect.

“I touched the kerb to try to avoid impact, and then I touched him a bit. Luckily, we didn’t crash. Then I lost one place when Bastianini overtook me. I stopped on the straight and I was waiting for him just to blame and to do some things. He was threatening me and doing something, but when you are in this type of situation, I can understand.

“I think Jack is a good guy. Like I said, if he was me, I would be also angry. So, I don’t have nothing to say about him. He was just saying, ‘See you in the next one’. or something like this. Australian style, let’s say. But, nothing to say about Jack. He’s always respectful in the race. He’s a good rival, so there’s nothing to say.

“I’m sorry for the manoeuvre, but I don’t respect the decision of the stewards. I think that the penalty is completely… I don’t understand, because if all the races are like this, you don’t overtake. You just don’t try. Better don’t try. Racing will lose its essence. In Qatar, probably they were not the same ones as in Qatar, when what happened to me with Jack. They probably were on holiday today, those ones. Not much to say,” summed up Mir.