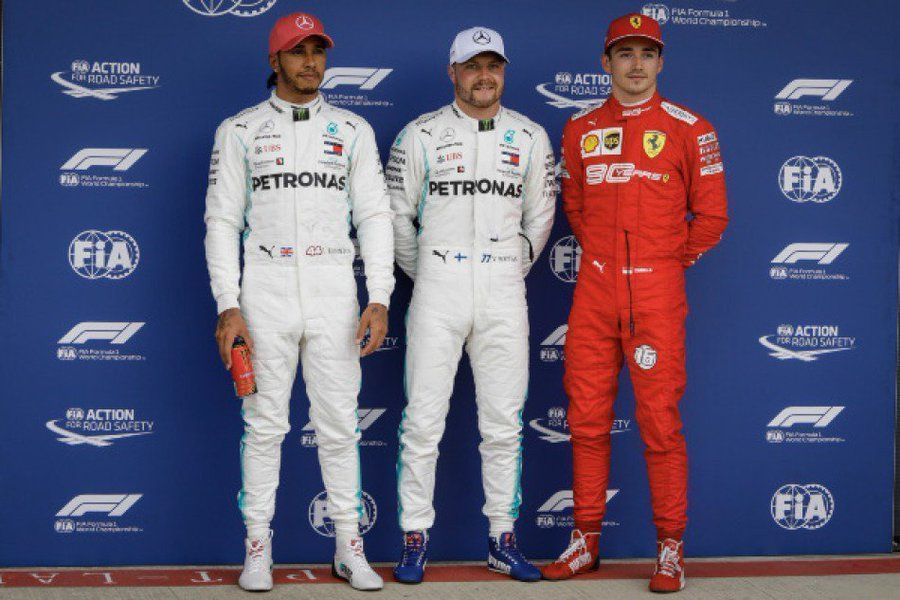 Mercedes’ Lewis Hamilton has a race set-up tuned on his car which he is hoping will come handy in F1 British GP as Ferrari’s Charles Leclerc banks on a clear strategy.

Hamilton was beaten by Mercedes teammate Valtteri Bottas for F1 British GP pole at Silverstone by just the 0.006s after the former made an error on his first lap in Q3. No one improved by much on their second lap with a big one from Leclerc.

The Monegasque ended up only 0.079s off Bottas and crucially ahead of the Red Bull Racing drivers when his teammate Sebastian Vettel could only manage sixth. The Ferrari drivers are on the alternate strategy starting on soft than medium.

For Bottas, it wasn’t the best lap he has done but was happy to get pole in Hamilton’s home grand prix. The start will be key for the Finn, which he is working to stay ahead of the British racer. “It was good,” he said. “Obviously good enough for pole.

“There was not much in it between me and Lewis in the end. But still, going into the second run, there were a couple of place where it was clear there was margin to improve so I wouldn’t say it was a perfect lap, but I doubt anyone got a perfect lap.

“It was not easy to get everything right and super-sensitive to tiny mistakes with this new tarmac and also with a bit of wind. I’m happy that it was enough. I’ve definitely been working a lot on the starts this year especially after the couple of not ideal ones.

“So, I’ve been focusing a lot and feel much more comfortable  with the starts than earlier in the year. Obviously every start is going to be different, we always have different circumstances, different set of tyres, temperatures.

“I feel more confident and obviously aiming for a good start to the race and use the good grid position.” On the other side, Hamilton wasn’t exceptionally happy to lose pole but quietly confident with his race set-up which could be crucial for the British GP.

“The set-up suited race trim best and I really did struggle on Friday with it on a single lap and of course I was trying to improve it over the evening and into Saturday,” said Hamilton. “It felt great into FP3 and it felt really good at the start of qualifying.

“It kind of deteriorated through the session, so it got harder and harder, back towards a similar problem we had in practice – as you saw in Turn 6 for example. But it was also windy. The race trim is still good. I didn’t want to move from the set-up I had.

“Not too far away from it because it worked so well on the long run in practice. Fingers crossed the strength in the race should be quite good but again it depends on what position we are in and how the wind is and a bunch of other factors.”

Moving onto Ferrari side, Leclerc was quite upbeat after getting so close to Mercedes when they were not expecting it as they had issues with the front-end all Friday instead of any troubles with the tyres. “I am very, very happy with my lap,” said Leclerc.

“I think in the last corner I maybe could have done a little bit better, but not much. Overall, I think we are very happy with the performance, very close to Mercedes and we did not expect it. We thought we would be struggling more this weekend.

“We have been struggling since FP1 with the front end of the car, still in qualifying, but a little bit less. So yeah, it’s a good qualifying session for us. Of course, I would have hoped for a higher position, but third is the best we could have done.

“If we look at the Friday race simulations, I think it’s going to be very difficult to fight with  – or at least Lewis’s race run was very very strong. We need to work on that but Red Bull seems to be very quick also in the race runs so it’s going to be tricky.

“If we manage to gain some positions at the start, it’s a track where it’s quite hard to overtake so then we have some chances to keep them but if not I guess it’s going to be very difficult to fight with them.” His teammate did not enjoy his run at all.

He had some DRS issues but his lack of pace in Q3 was not because of that but just that he wasn’t quick enough as Leclerc. “It’s been a bit of an up and down weekend for me and this afternoon, I struggled to get the most out of the car,” he said.

“I couldn’t get a feel for it and I wasn’t happy with how it went. Lately, we have been clearly struggling on one lap pace. However, looking at our long run pace from free practice, I expect to be more competitive in the race.

“It looks like Mercedes start favourite, but I think we can take the fight to the Red Bulls and then see what we can do from there.” It will key for Ferrari to keep Red Bull behind as both Max Verstappen and Pierre Gasly look good.