After their surprisingly lacklustre showing in Singapore last weekend, Mercedes were back to something like their best in final practice in Japan on Saturday afternoon, with Nico Rosberg and team mate Lewis Hamilton moving several tenths of a second clear of their rivals.

Rosberg lapped the technical Suzuka circuit in 1m 33.995s – 0.297s faster than Hamilton and over half a second clear of Daniel Ricciardo’s best-of-the-rest Red Bull.

The Williams of Valtteri Bottas and Felipe Massa were fourth and fifth quickest, just ahead of Ferrari’s Kimi Raikkonen, Toro Rosso’s Max Verstappen and the other SF15-T of Sebastian Vettel.

In a stark contrast to yesterday, everyone was in a rush to get going in what was the first dry session of the weekend, with every driver well into double figures in the lap count as they sampled Pirelli’s orange-marked hard and white-marked medium compound tyres for the first time.

Ricciardo set the ball rolling for Red Bull with 1m 36.392s, trimmed that to 1m 36.010s, and then dropped down to a 1m 34.755s once he had switched to the mediums. At the time that put him more than 1s clear of the field, with Toro Rosso duo Verstappen and Carlos Sainz completing the top three.

Attention turned to what Mercedes and Ferrari might muster in response, but both kept a low profile in the opening half of the session. Williams instead led the fight-back, with Massa and Bottas jumping into second and third at the halfway point – with the Ferrari sandwiching the Mercedes in 10th through to 13th.

Rosberg finally came out on mediums with 25 minutes left, and immediately lowered the benchmark – overall bests in all three sectors resulted in a 1m 33.995s, undercutting Ricciardo by half a second.

Hamilton jumped up to second, 0.297s off his team mate, but neither improved thereafter. Indeed, many drivers had slippery moments which ruined their laps, not least Daniil Kvyat in the second Red Bull. The Russian had three offs while struggling with understeer, and wound up 14th, 1.7s down on Ricciardo.

With less than 10 minutes to run Ferrari finally headed out for their own qualifying simulations, but neither Raikkonen nor Vettel were able to make an impact on the top order, slotting into the fringes of the top eight.

Lotus’s Romain Grosjean was only fractionally slower than Vettel in ninth, with Sainz rounding out the top 10.

It was extremely tight in the lower midfield. McLaren were encouragingly close to Force India’s pace, with Jenson Button 12th despite bitter complaints about understeer. Fernando Alonso meanwhile was just two tenths off Nico Hulkenberg in 11th, although that translated into five places in the order, the Spaniard paying the price for a mistake at Spoon on a late flyer.

Sauber’s Marcus Ericsson and Lotus’s Pastor Maldonado were just ahead of Alonso in 13th and 14th, while Sergio Perez in the second Force India was 17th. Felipe Nasr in the second Sauber was half a second down the road, although still some way clear of the Marussias, where Will Stevens led Alexander Rossi by just over one tenth of a second. 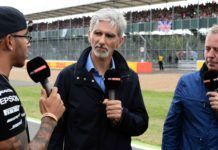