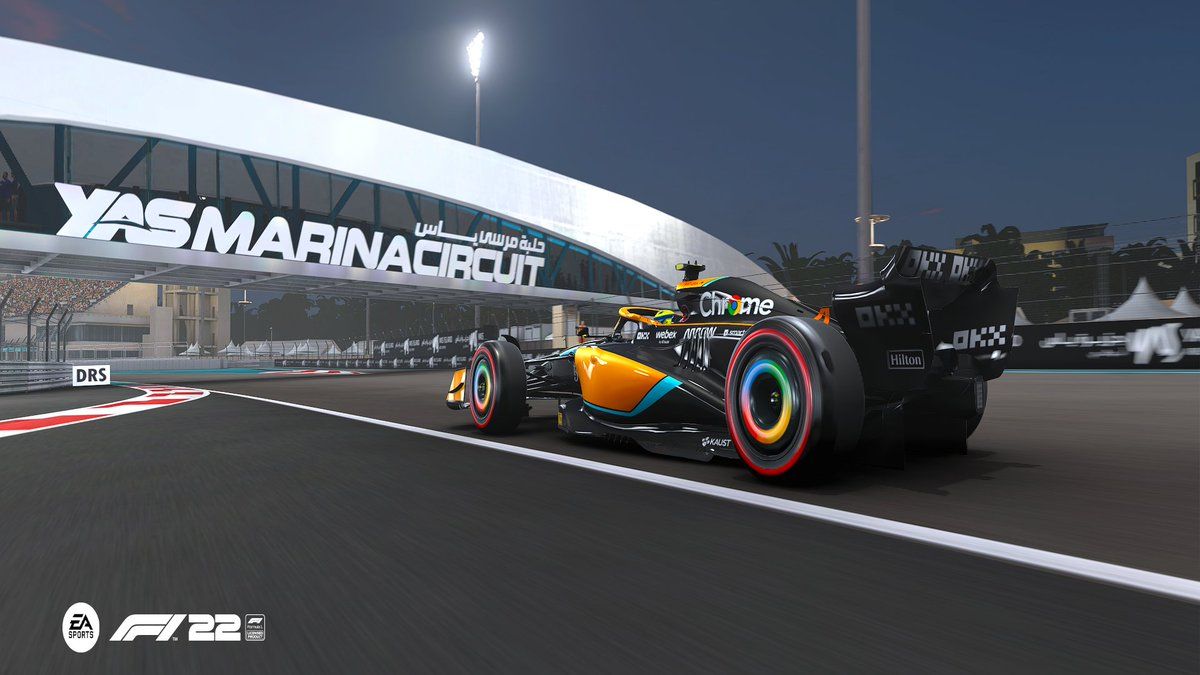 McLaren Shadow has won both the drivers’ and teams’ titles for the first time in F1 Esports history in 2022 with Lucas Blakeley doing it so.

On Friday evening in the final race of the season McLaren Shadow’s Lucas Blakeley won the 2022 F1 Esports Series Pro Championship in dramatic fashion, securing his maiden title. McLaren Shadow have also been crowned the Constructors Champions for 2022 for the first time, clinching the title with two races to go after a brilliant season for Blakeley and his ever-present teammate Bari Boroumand.

The Grand Final began with five drivers battling for the championship, with only 22 points seperating Blakeley at the top and last years’ champion, Jarno Opmeer in fifth. Blakeley’s teammate Boroumand, Haas rookie Thomas Ronhaar and Red Bull’s Frede Rasmussen were the other three drivers in contention for the title. The Constructors’ Championship was also still to be decided going into the Grand Final, but McLaren Shadow had a dominant lead on Red Bull and Mercedes.

On Wednesday, the Pro Championship visited Suzuka in what was a entertaining encounter, full of exciting, wheel-to-wheel racing. It was Ronhaar who started the race on pole but Alfa Romeo’s Nicolas Longuet came out victorious, getting his first race win of the season as the Haas driver and Rasmussen made up the rest of the podium.  Opmeer was unable to continue his impressive form from the previous event and his title hopes came to an end after not being able to finish the race. McLaren Shadow clinched the Constructors’ Championship at Suzuka with Blakeley and Boroumand finishing 4th and 5th respectively.

Blakeley went on to secure his fourth win of the season in the penulatimate race at Interlagos, which began in wet conditions. The Scotsman, who started on pole in a McLaren 1-2, was able to hold his position at the front, avoiding the battling going on behind him between two of his title rivals, with Rasmussen and Boroumand eventually securing P2 and P3, with the latter’s title hopes ending due to results around him. Meanwhile, the other tittle contender, Ronhaar, had a dissapointing race for his standards, finishing sixth after starting the race in fifth – however, this result still kept the Dutchman’s title hopes alive.

This meant in the final race of the season, it was all to play for at the Yas Marina Circuit, with Blakeley (169 points) needing just five points to secure the title, ahead of Rasmussen (148) and Ronhaar (147). It started with a surprise as AlphaTauri’s Josh Idowu got his first pole position of the season, crowning what has been an impressive season for the former McLaren driver. However, the title-chasing trio took up the three spots behind him so it was set-up for a tense race to the finish line, especially with a mix of tyre strategies at play.

Ronhaar, who started in P2, took the lead before the pit stops, with Red Bull’s Marcel Kiefer also playing a role in keeping the Haas man behind him in an attempt to boost his teammate’s title chances. Rasmussen soon took the lead and held on to it until the end, with Ronhaar and Idowu making up the top three, but it wasn’t enough as Blakeley took P4 and secured his first ever F1 Esports Series Pro Championship title, culminating in several years of determination and improvement from the Scotsman.

This season drivers continued to race remotely from their homes or team facilities, as they have done since 2020, but the hugely popular competition continues to broadcast from the Gfinity Esports Arena in London. Teams battled it out on the official F1 2022 video game, developed by Codemasters and EA Sports, with the live shows being streamed online via official channels of Formula 1 on Facebook, YouTube, Twitch and Huya, as well as broadcast on television via select international broadcast partners.

For the third consecutive year, Aramco was the presenting partner of the Pro Championship alongside long-term partners DHL and Fanatec, who have continued to play a fundamental role in the F1 Esports Series, with the latter supplying hardware to all drivers for this year’s campaign, as it has done since 2018.

F1 Esports events have achieved over 45m views across TV and digital, in the last 18 months, and this popularity led to a record number of people attempting to be a part of this year’s Pro Exhibition, with over 500k taking part in qualification.

Brandon Snow, Managing Director of Commercial at Formula 1, said: “It has been another fantastic season which once again, came down to the wire in the final event of the season. I want to thank all the teams, individuals and, partners that have been able to make this season’s championship one of the most entertaining yet. It has been an incredible battle between all the drivers from start to finish with some brilliant wheel-to-wheel racing, and I wanted to congratulate the winners, Lucas Blakeley and McLaren Shadow. We look forward to another exciting year for F1 Esports in 2023!”

John Clarke, CEO at Gfinity, said: “F1 Esports Pro Series is the gift that keeps on giving. The 2022 season has shone a spotlight on new racing talent and intense team rivalries. The broadcast product has been strengthened by taking us behind the scenes to the Team HQ’s and showcasing how F1 Esports and their F1 counterparts are sharing their skills, knowledge and resources to bring these two worlds closer together. The result is another year of competitive wheel to wheel racing and a surge in fans watching the shows and supporting the talented drivers. Bring on 2023!”

Paul Jeal, F1 Senior Franchise Director at Codemasters, said: “The F1 Esports Series Pro Championship kept fans gripped from lights out to the final chequered flag and continues to showcase the world’s best virtual drivers. Huge congratulations to our new World Champion, Lucas Blakeley, for holding his nerve in the final week and to Lucas, Bari Boroumand and Wilson Hughes for securing the Constructors Championship for McLaren Shadow.”