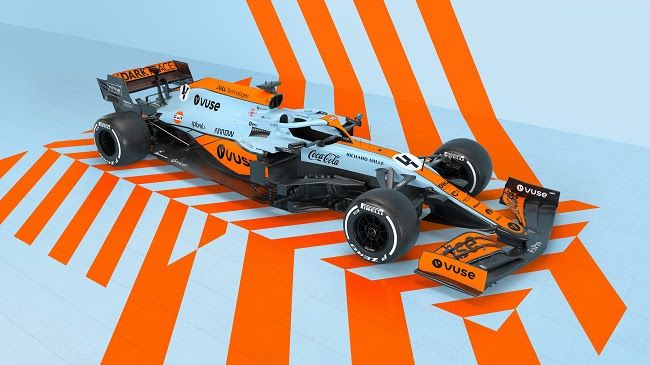 McLaren Racing has unveiled a special Monaco GP livery, going back in time, to celebrate its partnership with Gulf Oil.

Both McLaren and Gulf Oil re-united last year in July after a new deal was announced between the two. Their partnership goes back to Bruce McLaren days, when its GTR Longtail, ran the livery to a P2 finish in second at the 1997 Le Me Mans 24 Hours race.

The British outfit has brought back the combination of the team’s papaya with Gulf’s blue for next weekend’s Monaco GP. The team kit along with the F1 driver overalls will be in same colours, with the helmets to have a brand new design too.

The limited edition merchandise is also available for fans to buy at McLaren’s shopping website. “This will be McLaren’s homage to Gulf’s celebrated race car design. We’re enormous fans of brave and bold design, and the striking Gulf blue is among the most loved liveries in racing, a celebrated piece of culture which transcends the world of motorsport,” said Zak Brown.

“Design has always been important to McLaren – you see this in everything we do from our return to papaya to our stunning headquarters, the McLaren Technology Centre. We’re excited to exhibit this as a team and celebrate our proud association with Gulf in Monaco.”

At the same time, Mike Jones, Chief Executive Officer, Gulf Oil added: “Gulf and McLaren have a relationship that dates back to 1968 and is one of the most successful partnerships in motorsport. We are incredibly excited to pay tribute to this heritage with our classic livery design at the Monaco Grand Prix, the most spectacular and stylish event on the Formula 1 calendar.

“To see the reaction of both Lando and Daniel as well as the whole McLaren team to this livery has been really special and we are thrilled to unveil it to motorsport fans around the world. The distinguished racing blue and fluro orange Gulf colourways are iconic, so to mark our return to Formula 1 and showcase the livery in Monaco with McLaren is a great celebration of our bold and colourful place within the sport.”

Here’s photos of the car: