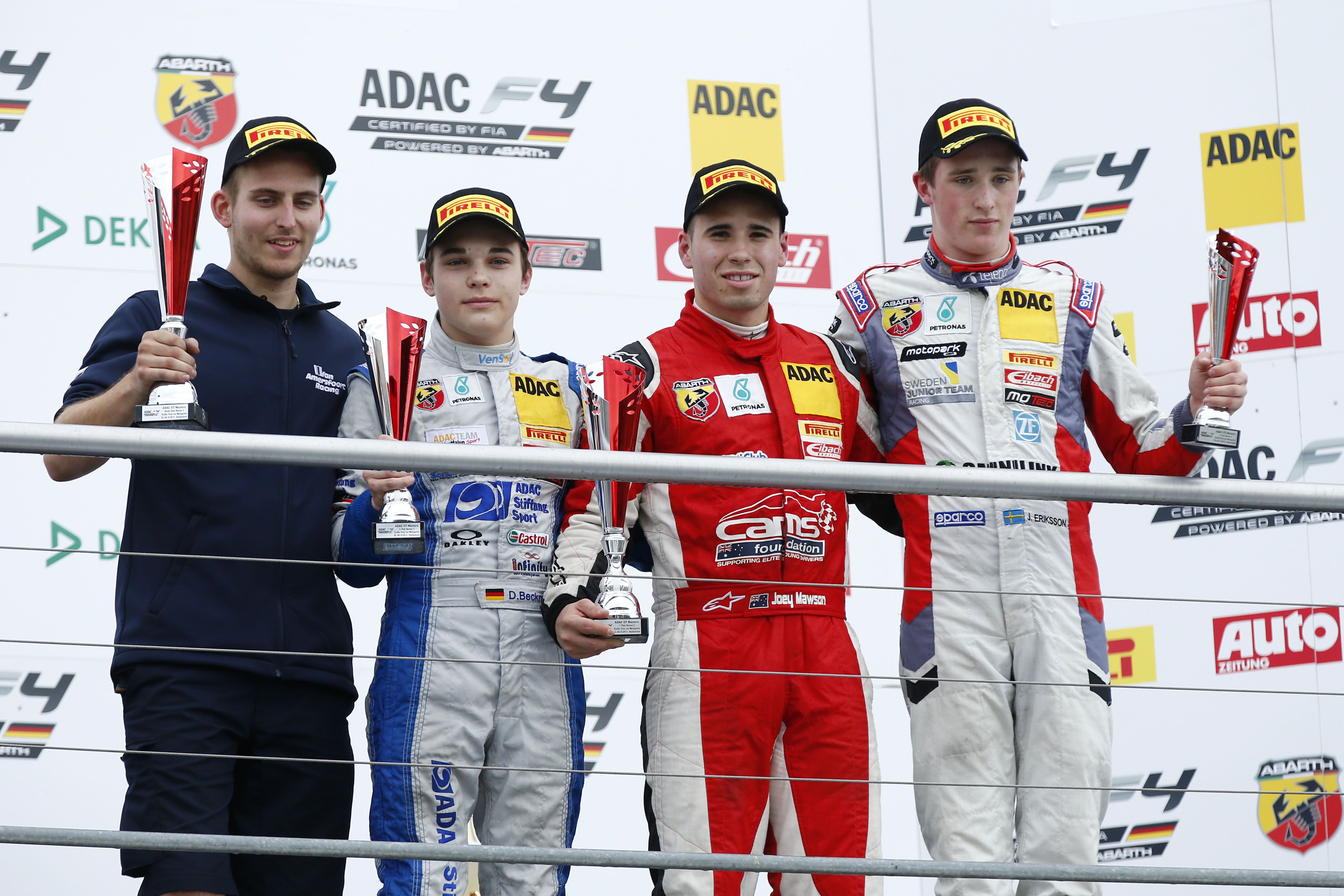 Van Amersfoort Racing’s Joey Mawson led from pole position in the final race of the ADAC Formel 4 season, keeping ahead of the anarchy that ensued down the field in the damp conditions. Marvin Dienst, 2015 champion, was the first driver to exit the race in dramatic style (see video below), while rookie champion David Beckmann came home in second and confirmed his title.

The start was relatively clean, with no major incidents and the fighting was close throughout the field. For the first couple of laps the state of play remained fluid, cars switching places constantly. Exiting the last corner, it was Dienst who made the first mistake of the race, spinning on the damp track. The young German’s misfortune hadn’t come to an end though, not only did Dienst drop out of the top 10, a spinning Van Uitert ploughed into the back of him, the hefty impact ripping the rear of the Dutchman’s car off and catching an unsuspecting Nikolaj Rogivue up in the mess as he ended up in the tyre barrier.

The red flag was brought out to clear the cars from track, leaving the remaining drivers to line up on the grid. Thankfully, all drivers were able to exit the cars unaided, with a visibly distressed Van Uitert embracing his fellow driver Dienst as they made their way to the medial vehicles.

The restart took place behind the safety car, and once it pulled in Mawson seized the reins again, pulling away from the rest of the drivers. Mick Schumacher had already made up in excess of 10 places at the start and continued to surge through.

Luck wasn’t with car 18 of Giorgio Maggi though, getting a wheel onto the wet grass and heading straight into the gravel trap. The safety car emerged once more erasing the gap Mawson had created, although his control of the restart was impressive for the second time.

As the saying goes, bad luck often comes in threes, and for the closing race of the ADAC F4 season was no exception. Intense wheel-to-wheel fighting left Zimmerman in the wall and teammates Jonathan Cecotto and Michael Waldherr taking a trip through the gravel bed, hailing the safety car for the third time in the race.

With little time remaining, the race and the season finished behind the safety car. Joey Mawson took the win, with Beckmann in P2 and rookie winner and Joel Eriksson joining them on the podium. Despite the accident Marvin Dienst leaves 2015 as ADAC F4 champion, and Beckmann as rookie champion.