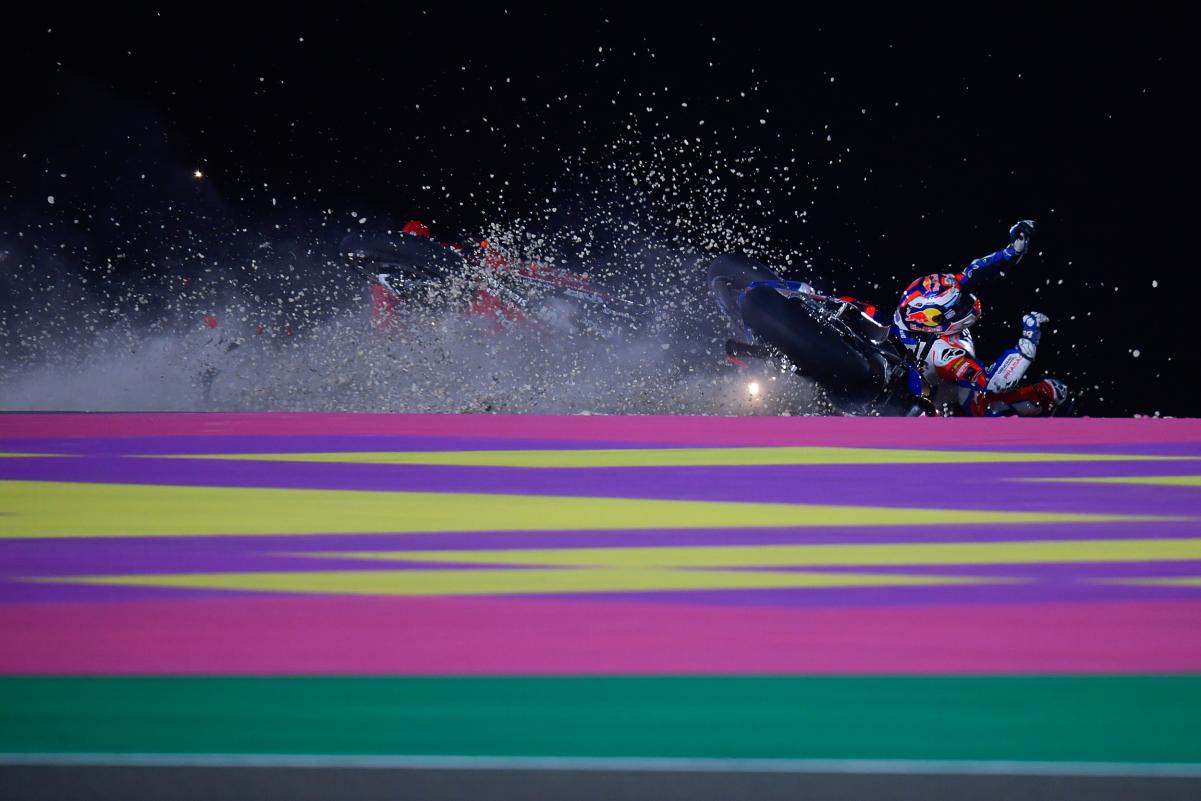 Jorge Martin was not frustrated by Francesco Bagnaia crashing into him, but more by them not being able to challenge despite pole in MotoGP Qatar GP.

It wasn’t the end that Pramac Ducati’s Martin wanted after starting Qatar GP on pole. Already he had a bad start which saw him drop to the fag end of the Top 10, with fellow Ducati riders Bagnaia and Jack Miller seeing similar fates.

The only Ducati rider to hang on was Enea Bastianini onboard the 2021 bike. A bad start meant both Martin and Bagnaia had to fight through the field. They came together at Turn 1 where the latter lost control and slipped taking the former with him.

Bagnaia was on the inside when he fell as Martin for one moment was horrified by the Ducati rolling over near him. “I didn’t start well, anyway I was still top three, but I got close to Enea and had to close the throttle,” he said to media including MotoGP. “A lot of riders overtook me and from then everything went wrong. I’m not happy.

“I mean, crashes sometimes happen. I’m just angry because we were uncompetitive. I was expecting to be fighting for the podium or even the victory. But the pace wasn’t there. We had some issues and we need to understand. I couldn’t overtake even an Aprilia or the Suzukis. I don’t know exactly which is our strong point now.

“We don’t have a strong point. So we need to understand well and focus to try to improve because I think 7th-8th place was the maximum. With the crash, actually, it was the first time I had a fear about my life because I was really fast into the gravel between both bikes and I think I pushed one bike, Pecco’s bike, with my hand.

“I have pain in my right thumb, so we will check tomorrow in Barcelona. I hope nothing is broken and we can race well in Indonesia,” summed up Martin. While in the gravel, Bagnaia quickly came to apologise as the former teammates acknowledged each other.

“I was recovering positions but my speed was not so high,” Bagnaia said. “And I was losing too much time in the acceleration, and we have to understand why. I was a bit late to entry [into the corner] on Jorge, but the braking was not too hard. So, it has been quite strange to have this front locking in this moment.

“I have just to say sorry to Ducati and to Pramac and Jorge,” summed up Bagnaia, who became the second factory Ducati rider to retire in a disastrous Qatar GP for the Italian manufacturer. His teammate Miller already retired due to electronics issue.

“I mean from the get-go the bike wasn’t fantastic,” Miller said. There was something missing in the electronics, the bike was quite lost, let’s say. I had 100% power in some very, very strange points on the track and then coming onto the front straight I had no power, I had to go to fourth gear pretty much directly.

“At the last corner everyone was passing me. I honestly thought I was going to get run up the arse coming out of the last corner because I was that slow. The sectors were all off, so electronics issue. I tried everything I could, swapped from map A, B, C, system on, system off.

“I tried my best, but at one point – especially over the back part of the track – kept firing me off. I’d be between corners and it would give me a massive burst of throttle. Of course, my [throttle] grip’s open, but I was not expecting that. Nothing to learn from that [race].

“The bike was foreign, very foreign. It is what it is, we know the issue, we know what happened. It’s unfortunate but hopefully it won’t happen again,” summed up Miller, with Bastianini giving something to cheer to Ducati after his first MotoGP win.

Here’s how Qatar MotoGP panned out