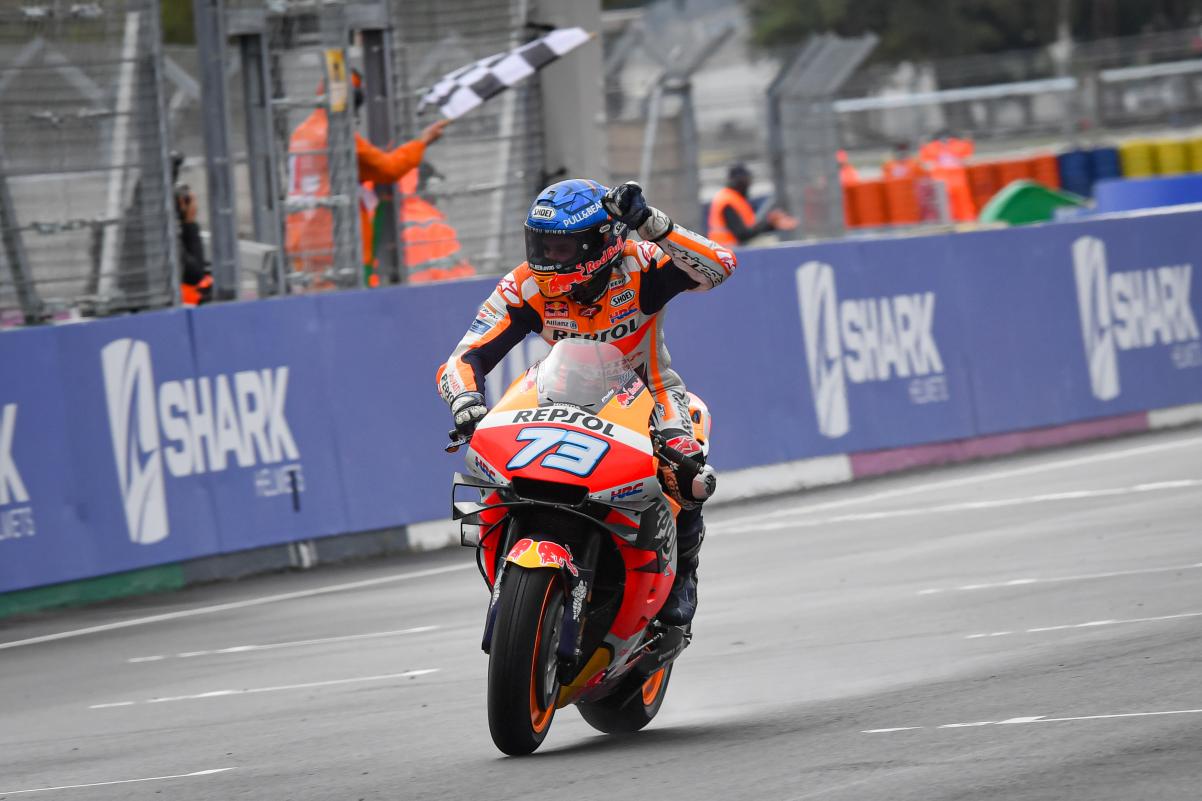 Alex Marquez was a relieved rider after first MotoGP podium as Miguel Oliveira and Francesco Bagnaia bury the trouble after qualifying run-in.

Having only qualified 18th for French MotoGP race, Honda’s Marquez was looking at another fighting grand prix, where the aim was to score as much points as possible and learn more about the bike. Little did he know, what was to follow.

With the weather turning on quickly just ahead of the race, the confidence in Marquez rose, especially with the conditions neutralising the race somewhat. And so it happened as the Spaniard started to make up positions gradually after a fantastic start.

He was already near the Top 10 and moved inside it, slowly catching the lead pack, who were fighting among themselves. Some retirements helped him along the way, but eventually Marquez had to pass KTM’s Pol Espargaro to get himself into third.

He made a quick work of Ducati’s Andrea Dovizioso to be second as the Italian lost to Espargaro as well. The Honda rider then set out for Danilo Petrucci but with not many laps remaining, he had to settle for second in the end, mere 1.2s behind the winner.

It was his first MotoGP podium and one that was needed for not only his but also Honda’s confidence. Having lost his seat already before the start of the season, Marquez was happy to show his mettle but agreed that he needs to prove it in the dry as well.

“In the end I know why I am here and why I am wearing these colours, I am a two-time World Champion and I know why they promoted me to the Repsol Honda team,” said Marquez in the press conference. “It was a strange situation because Lorenzo retired in the last race so it was difficult to take the decision and the team trusted me, so for that reason I have piece of mind as to why I’m am here.

“The criticism is good sometimes, it gives you more motivation and gives you fire to keep going and believe in yourself. I agree with the critics because the performance is not what we expect, in qualifying especially I am not as fast as I want, but as for the move. I don’t care about the critics, I know why I am here.

“I don’t feel vindicated, a podium in water doesn’t mean that much. But it makes you continue to believe. I made the jump to MotoGP at the right time and we are doing things well. My last podium was in Malaysia. So that feeling was great when you are a world champion. It feels greater than a MotoGP podium when you are world champion.

“But, I’m really happy also for this podium, but now we need to repeat in dry. This is the key to being fast and to being in the MotoGP class. So, we are coming step by step, but we need to put it all together.  We need to improve the qualifying, coming from 18th is so difficult. But so happy for the team who needed it quite a lot.

“I have always believed that the podium was possible and more seeing how the year is, I knew that you had to take advantage of opportunities and more like Le Mans. I knew that the motorcycle in water behaves well, I have seen it in many Marc wet races and we had to do the rest,” summed up Marquez.

While one of the young Spaniard had his day to excel, there was another in Tech 3 KTM, where Oliveira shone after an average qualifying. The Portuguese fought his way up to be sixth but it didn’t come easy, especially after his fight with Bagnaia.

The two had a run-in on Saturday, where Oliveira likely got in the way of Bagnaia in Q2, after which the Italian acted in a weird manner as per the Portuguese. “Pecco was acting very childish,” Oliveira said to media after the session. “After my third lap in Q2, I was off the racing line, or let’s say the ideal line, but not completely off the track.

“I could not see that he was coming, he started to wave his hands and for me the worst is that he crossed his bike to mine, like wanting to hit me and make me crash, also coming into the pits. For me it’s just a reflection of what he is, he’s a child. When you endanger another rider because of one fast lap, it isn’t normal to have this kind of attitude.

“I might make mistakes on track but I always try to respect my opponent, and not show that I want them to crash, and for me this was not acceptable from his side,” Oliveira stated, as he added that Bagnaia eventually apologised for his actions. “Just after my Saturday media session, he came immediately to apologise.

“It was a nice gesture from him because he recognised his attitude was not the best. That was after what I said. I told him what I said, he was cool. He’s a nice guy, a good rider. We all sometimes do crazy stuff in the heat of the moment, but that’s because we are human. At least, he came out and apologised, that was the big gesture than what he did.”

At the same time, Bagnaia, who finished only 13th, stated: “I have to say sorry for Miguel. When I’m in a normal situation my anger levels are low but when I find someone riding slow in front of me I am always very nervous. For sure it was enough what happened with us, because I was too angry with him.

“He was riding slowly but he was thinking that in a normal situation you can push for three laps and already this was the fourth. Maybe he wasn’t thinking about me pushing also on the fourth lap, and in any case if I meet him I will say sorry to him for my reaction but I will ask him to also watch behind him for someone arriving.”

Here’s Danilo Petrucci being emotional, Jack Miller on his trouble