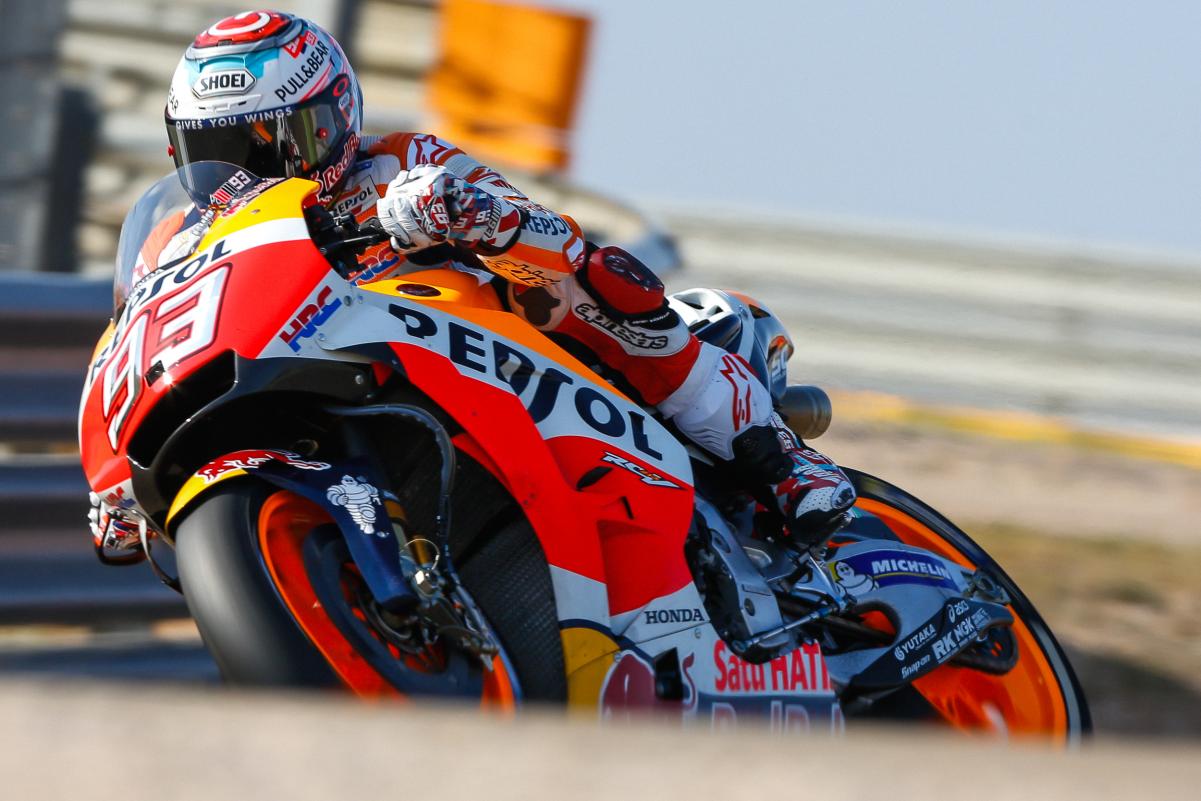 Marc Márquez has taken an authoritarian victory in Alcañiz that leaves him like outstanding leader of the world championship. Pedrosa was second, after coming back in the second half of the race with Lorenzo third, after a great start and race.

Jorge Lorenzo, as he has already done in several races this season, made a great start and took the lead. Maverick Viñales fell to second place, but was overtaken by Valentino Rossi before finishing the first lap. Andrea Dovizioso improved a lot at the start and finished third on lap1. Marc Márquez also overtook Viñales, who was already fifth.

The first four did not take long to escape from Viñales, who was racing rather slow and was being caught by the next group. On lap 6, Karel Abraham fell. Marquez overtook Dovizioso for third.

On lap10, the Honda rider tried to overtake Rossi, but he went wide and fell again to fourth place. It only took him a lap to come back to beat Dovizioso. On lap13, Marquez also surpassed Rossi and was already second. A lap later, Viñales lost the fifth place in favour of Dani Pedrosa.

Pedrosa went on to be the fastest on track, and reached the position of Dovizioso, finally overtaking him on lap 15. In the following lap, Marquez overtook Lorenzo to lead the race, and Pedrosa did the same with Rossi for the third.

On Lap 17, Cal Crutchlow fell. Ahead, Viñales beat Dovizioso for fifth. The Italian was struggling and also lost ground to Aleix Espargaró. With 3 laps to go, Viñales beat Rossi. On the same lap, Pedrosa got to second after overtaking Lorenzo.

Nothing changed and Marquez got his fifth victory of the year, becoming thus more leader than ever. Pedrosa has been second after a sensational second half of the race and completes Honda 1-2. Lorenzo, third, gets his second podium of the year and the second with Ducati. Viñales, Rossi, A. Espargaró, Dovizioso, Bautista, Zarco and Pol Espargaró complete the top10.

These results leave, with the hard Asian triplet ahead, Marquez leading the World Championship with 224 points, followed by Dovizioso with 208 and Viñales with 196. These three should be those who’ll fight for the title. The next race, the first on the Asian continent, will be on October 15, in three weeks time, at Motegi.