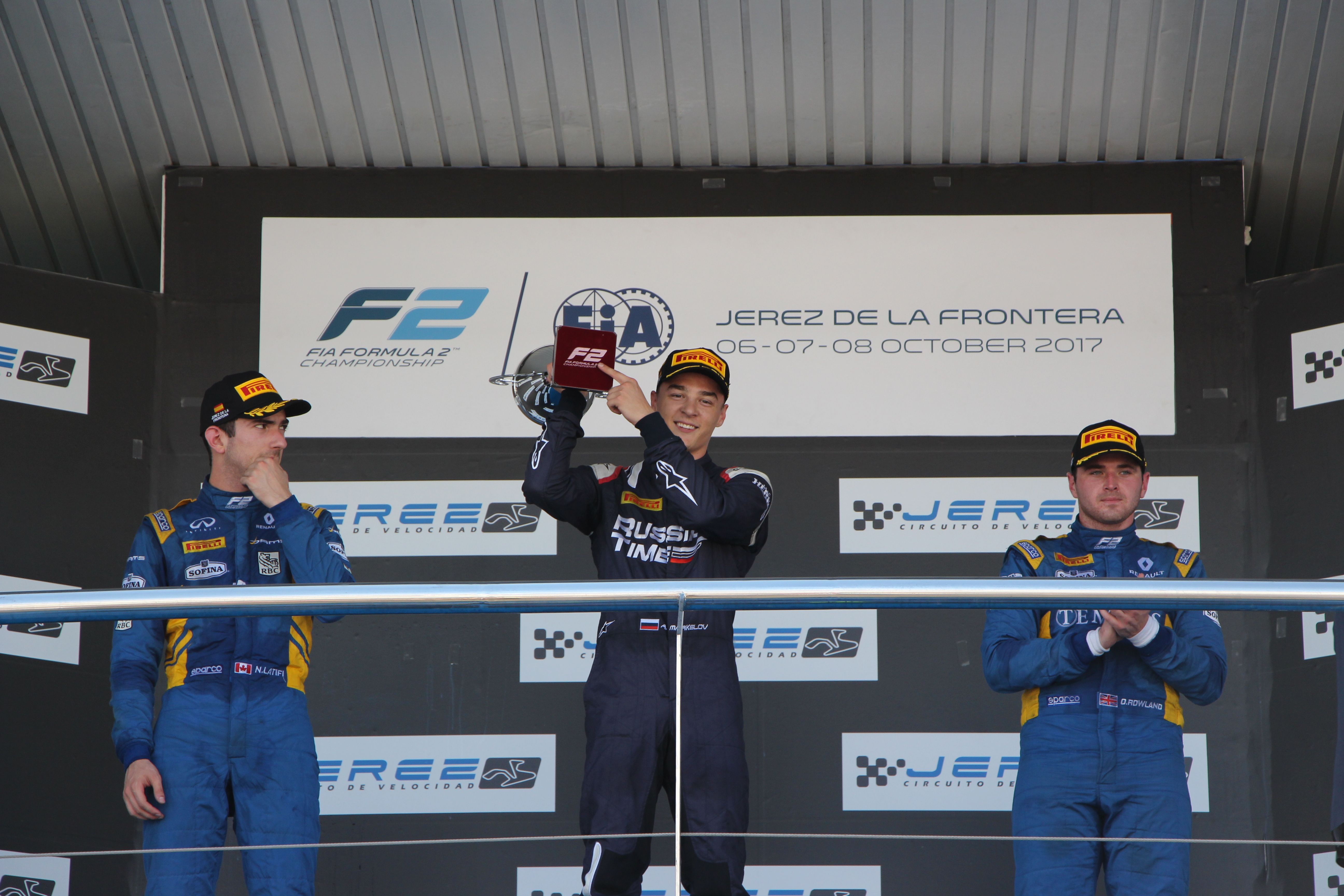 Artem Markelov has taken win in the second race in Jerez in a race in which tyre degradation has been a key fact again. Latifi has finished second with Rowland third.

The race suffered a 15-minute delay due to trouble on the Safety Car. When it started, Alex Palou kept his first place. Behind him, Luca Ghiotto and Jordan King made contact in turn 2 and the Italian driver ended up in the gravel trap. Behind King, Nicholas Latifi was third, followed by Artem Markelov, Oliver Rowland and Charles Leclerc, who have had to fight for sixth place with his team mate Antonio Fuoco.

On lap 3, both Prema drivers passed Rowland, who was now seventh. Sergio Sette Camara was given a five-second penalty due to an incorrect position on the grid. On lap 4, King had an engine failure and retired. Latifi was now second and faster than Palou. Markelov was third and Fuoco, who had passed Leclerc again, was fourth.

The already crowned champion overtook his team mate again. On lap 11, Rowland caught both Premas and passed Fuoco and, one lap later, Leclerc. Alex Albon also caught those drivers and, with obvious tyre issues, Fuoco pitted. Leclerc was passed by Albon and Norman Nato and pitted on lap 13.

Another driver with problems on his tyres was Sette Camara, who lost many places and ran wide into the gravel. On top, Latifi and Markelov were getting closer and closer to Palou. On lap 21 they were all three together, and Rowland didn’t take much to catch them.

Markelov passed Latifi and Markelov on lap 23. The Spanish driver was holding the DAMS drivers and Ghiotto opened a gap. Palou fell to fourth place on lap 24. Behind, Leclerc was gaining places after his Pit Stop and he was already sixth. The Prema driver overtook Albon for 5th place on lap 26 and went to catch Palou.

Leclerc only took one lap to make the six-second gap disappear and passed him on lap 27. Fuoco and Ghiotto were doing the same as the Monaco driver and passed Palou. Fuoco overtook Leclerc and Ghiotto passed them both. Nyck de Vries overtook Palou and Leclerc on the last lap.

The race ended like that. Markelov took his fourth win of the season and gets close to the fight for second place in the championship. Latifi has finished second and gets his eighth podium of the year after containing his team mate, Rowland, who has been third. Ghiotto, Fuoco, De Vries, Leclerc and Palou complete the points.

Leclerc has now 249 points. Rowland is second in the championship with 189, followed by Markelov with 177, Ghiotto with 170 and Latifi with 156. Next round will be held in Abu Dhabi the 25th and 26th of November and will be the last one of the season.