The start of the race meant an early retirement for Ghiotto, who was pushed against the wall by Fuoco. The Italian driver would get a drive through penalty for this incident. Ferrucci stalled his car and lost a lot of time trying to get his engine restarted.

After the Safety Car caused by Ghiotto‘s car, Russell crashed against the wall while trying a brave overtake in the Rascasse. The racing line was dirty with oil from an incident in the Porsche Supercup race, which made the Brit lose control of his ART. However, the Safety Car wouldn’t be needed in that occasion. It’d made a second appearance a few laps later, when Norris hit Boschung in the last corner, forcing the MP Motorsport driver to retire. The drama wouldn’t end there, as Albon made a late decision to enter the pits and hit De Vries, leaving both leaders of the race out.

This incident left Markelov on the lead of the race after extending his stint and opening a gap with those who had already pitted. Gelael and Merhi took advantage of the situation as well and completed the podium.

Fuoco started on pole ahead of Aitken, who was overtaken by Norris on the first corner and was forced to retire not much later with engine problems in his ART. Behind, De Vries and Makino stalled their engines on the grid. Ghiotto couldn’t avoid hitting the back of the Japanese driver, who had to retire while the Italian pitted and went back on track.

These incidents brought the first Safety Car on track, while the second one would be caused by Gelael crashing against the wall. With racing back thanks to the green flag, Fuoco, Norris and Delétraz had a comfortable gap on the top 3. However, Maini struggled to defend P4 from Markelov, who would eventually overtake him with a brilliant move at the Rascasse.

Russell made another costly mistake and crashed in Tabac and caused a Virtual Safety Car. Boschung had to retire as well, while Albon hit the back of Nissany at the exit of the tunnel, causing a spectacular accident which caused another Safety Car. The race was restarted with two laps to go, but both Fukuzumi and Ferrucci would crash in Rascasse, forcing the race to end behind the Safety Car.

Fuoco won the race ahead of Norris, but both of them got a time penalty after the race which didn’t affect the winner, but it brought the Brit down to P3. This meant Delétraz finished P2 after brilliantly holding back a very aggressive Markelov at the end of the race, giving his team Charouz a one-two. Merhi also got a penalty for overtaking Maini under the Safety Car, losing P5 and finishing P7. 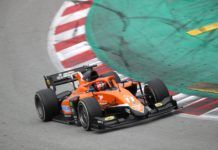