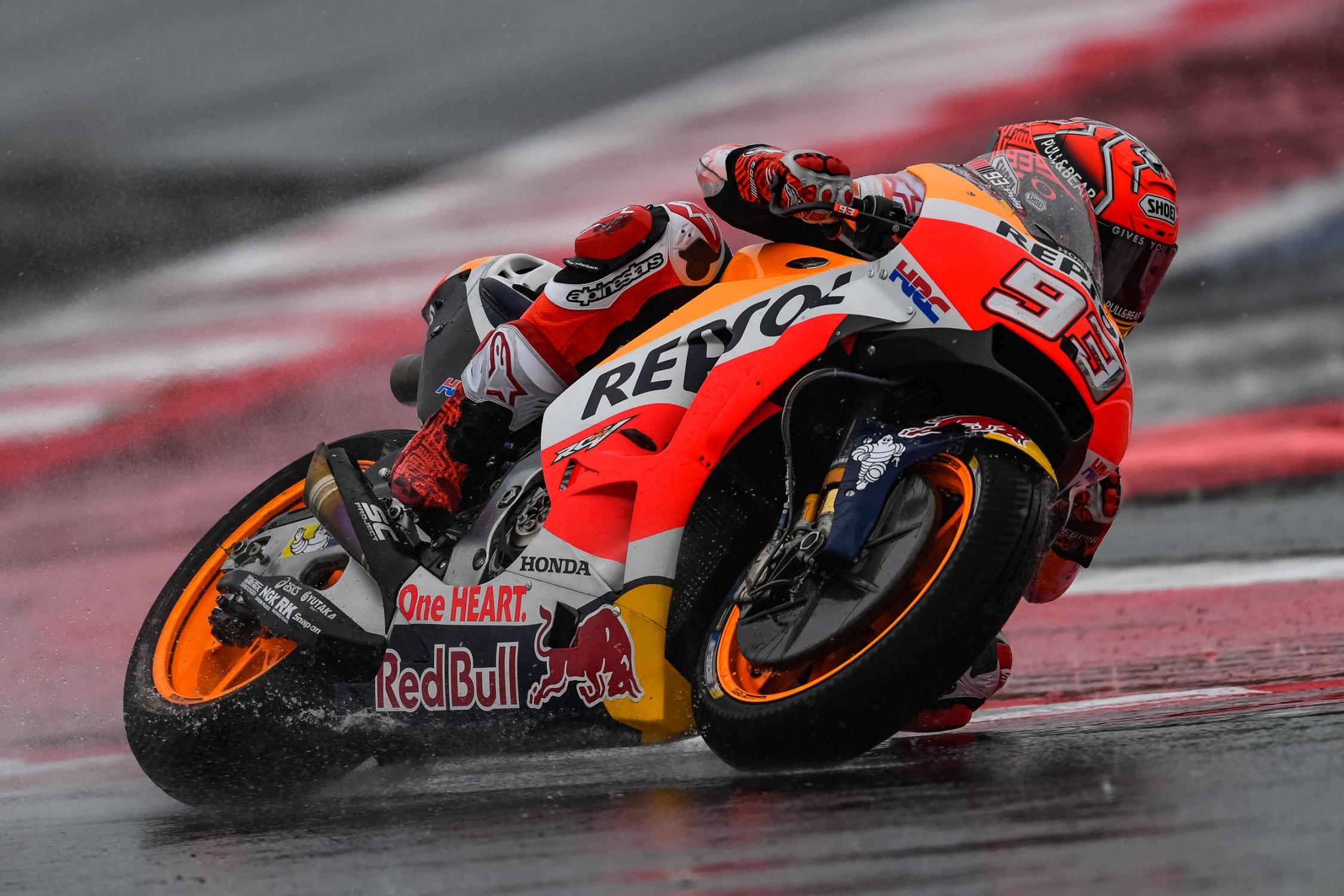 Marc Márquez (Repsol Honda Team )wins in a beautiful way in Misano. The Spaniard drove a superb race from start to finish to snatch away the win from Danilo Petrucci (OCTO Pramac Racing) in the last lap and Andrea Dovisiozo (Ducati Team) completes the podium in 3rd.

At the start we see Marc Márquez take a good start, but Jorge Lorenzo (Ducati Team) snatches the lead away into the first corner with an even greater start. Followed by Andrea Dovisiozo and Maverick Viñales (Movistar Yamaha MotoGP) who didn’t have the best of starts. Further back Danilo Petrucci took a great start as well, the Italian on a charge passing rider after rider to be up in 4th place already after the second lap, easily passing Viñales. The ducati’s definitely looking strong in the wet, with 3 bikes in the top 4.

Dani Pedrosa (Repsol Honda Team) seems to have the roughest start, he’s only back in 14th easily gets passed by Briton Scott Redding (OCTO Pramac Racing) to loose yet another spot. The Spaniard really struggles and ends up at the back of the field, loosing almost 7 seconds a lap to the front runners. Back in the front Petrucci finds a way past Dovisiozo and is now in chase of Marc Márquez, who keeps losing out on Jorge Lorenzo. Petrucci gets past Márquez with ease, as the Catalan makes a movement with his foot over the start/finish line to communicate with his engineers to prepare the bike for dryer conditions.

Drama as Jorge Lorenzo crashes out of his 3 seconds lead and is yet another victim of turn 6. Cal Crutchlow (LCR Honda) also crashes, but manages to get away again. The top 3 is now as close as ever, with Petrucci leading the way in front of Marc Márquez and Andrea Dovisiozo. As more crashes happen for other riders, including Loris Baz (Reale Avintia Racing) who was running in the top8. The Frenchman regains the track in 20th.

With still 17 laps to go, we see Honda bringing out Márquez’s bike, everyone wondering when or if the change will take place. We can see the other teams preparing the bikes as well. With no surprise we see some more crashes happen, mostly in turn 6 and turn 16. Behind the front runners, we see Maverick Viñales and Jack Miller (EG 0,0 Marc VDS), respectively in 4th and 5th, battling it our without taking any risk. Outside the top 10 we see some more battles between the KTM Factory drivers, Pol Espargaro and Bradley Smith, and Andrea Iannone (Team SUZUKI ECSTAR).

We’re only halfway through the race, but so much has happened already. The front runners still in the same positions, even if Marquez has had several scares already. Aprilia Racing Team Gresini teammates Sam Lowes and Aleix Espargaro both crash and abandon, while the times keep getting quicker as the track gets dryer. Jack Miller who was doing a great job going quicker than the front runners, now seems to struggle as he loses a spot to Michele Pirro (Ducati Team) to move back to 6th.

With just 5 laps to go, Danilo Petrucci and Marc Márquez set the pace and open the gap to Andrea Dovisiozo. The two now in the fron battling for the win, with Petrucci making a small mistake and almost losing the rear. The Italian still manages to stay in front of the Catalan, but his small advantage is getting even slimmer, as Márquez seems on a charge for the win. In the last 2 laps, Márquez gets really close to Petrucci and starts pushing to get past the Italian. Both giving everything to finish on the top step, with Petrucci blocking the Spaniard. In the last lap we see the Spaniard getting past the Italian, with a beautiful pass into the first corner as Petrucci almost falls off his bike while trying to get back.

Marc Márquez takes the win, closely followed by Danilo Petrucci. Andrea Dovisiozo ends in third with Maverick Viñales in 4th and an impressive Michele Pirro in 5th. Dani Pedrosa is the deception of the day, only finishing in 15th with no apparent problems. Márquez takes the lead in the championship back, with Dovisiozo in 2nd with an equal amount of points.