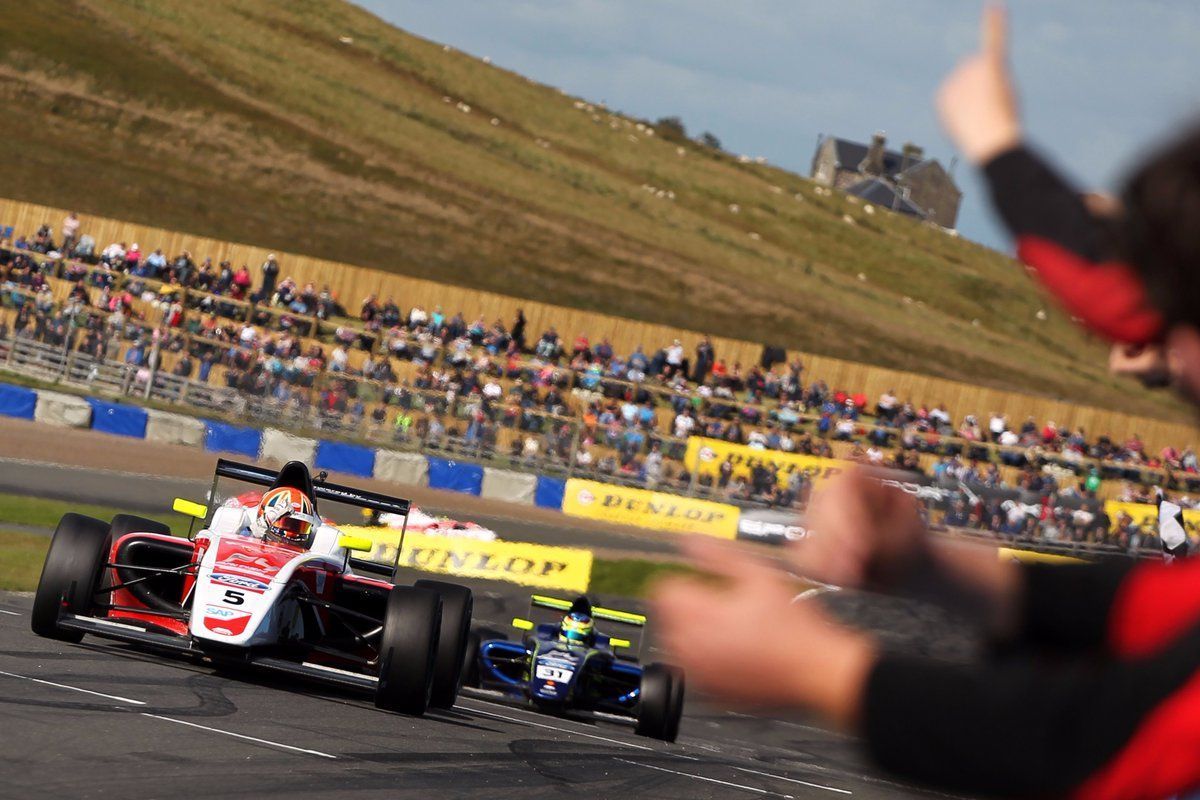 Oliver York took his maiden win in the F4 British at Knockhill in Round 20 of the season and brought home Fortec Motorsports’ first win of the campaign. Carlin’s Logan Sargeant chased down York in second, while Hampus Ericsson provided fans with a thrilling display of defensive driving to hold on to the final podium place and claim another Ford F4 Challenge Cup victory for Fortec Motorsports.

Starting alongside poleman Ericsson, Andy Priaulx Sports Management star York wasted no time in finding a way past his team-mate. Despite make an excellent getaway, Ericsson was immediately under pressure after turn one. York didn’t need any invitation when the first overtaking opportunity presented itself, scything up the inside of Ericsson to take the lead.

It immediately put Ericsson into the clutches of Sargeant and as the two jostled for second, York set about trying to break away from the field.

Sargeant eventually made a move stick on lap nine after a Safety Car period and despite the American recording the fastest lap on the final tour of the 1.27-mile Fife track, York had enough in hand to masterfully take the first single-seater win of his career.

The excitement for Ericsson was from over after being passed by Sargeant. The Swede immediately had to contend with Alex Quinn, Ayrton Simmons and Jamie Caroline. The latter having been on the back foot after running wide and off the track on the exit of Taylor’s Hairpin on the opening lap which cost him several places.

Ericsson refused to buckle under the pressure, doggedly keeping Quinn at bay, with Caroline and Simmons looming to pick up the pieces while swapping positions repeatedly in the closing stages.

Linus Lundqvist’s luckless weekend continued, despite yet another fine opening lap which saw him make up two places from eighth to get past title rivals Caroline and Oscar Piastri.

Contact with Piastri on the exit of Taylor’s Hairpin saw Lundqvist spin out of the race on lap six, Piastri suffer front wing damage and the deployment of the Safety Car.

The latter did well to nurse his car to the finish, being subject to an exhilarating two-pronged attack from Caroline and Richardson Racing’s Harry Webb who dived either side of the Aussie to climb up to sixth and seventh.

Lucca Allen was another casualty on lap six. Contact with JHR Developments’ Manuel Sulaiman resulting in a trip to the barrier for the Falcon Motorsport driver having been running in 14th, while Sulaiman just missed out on a point score later in the race finishing in 11th.

Patrik Pasma soared up through the order from 16th to finish in the points in 10th, behind Double R’s Karl Massaad.