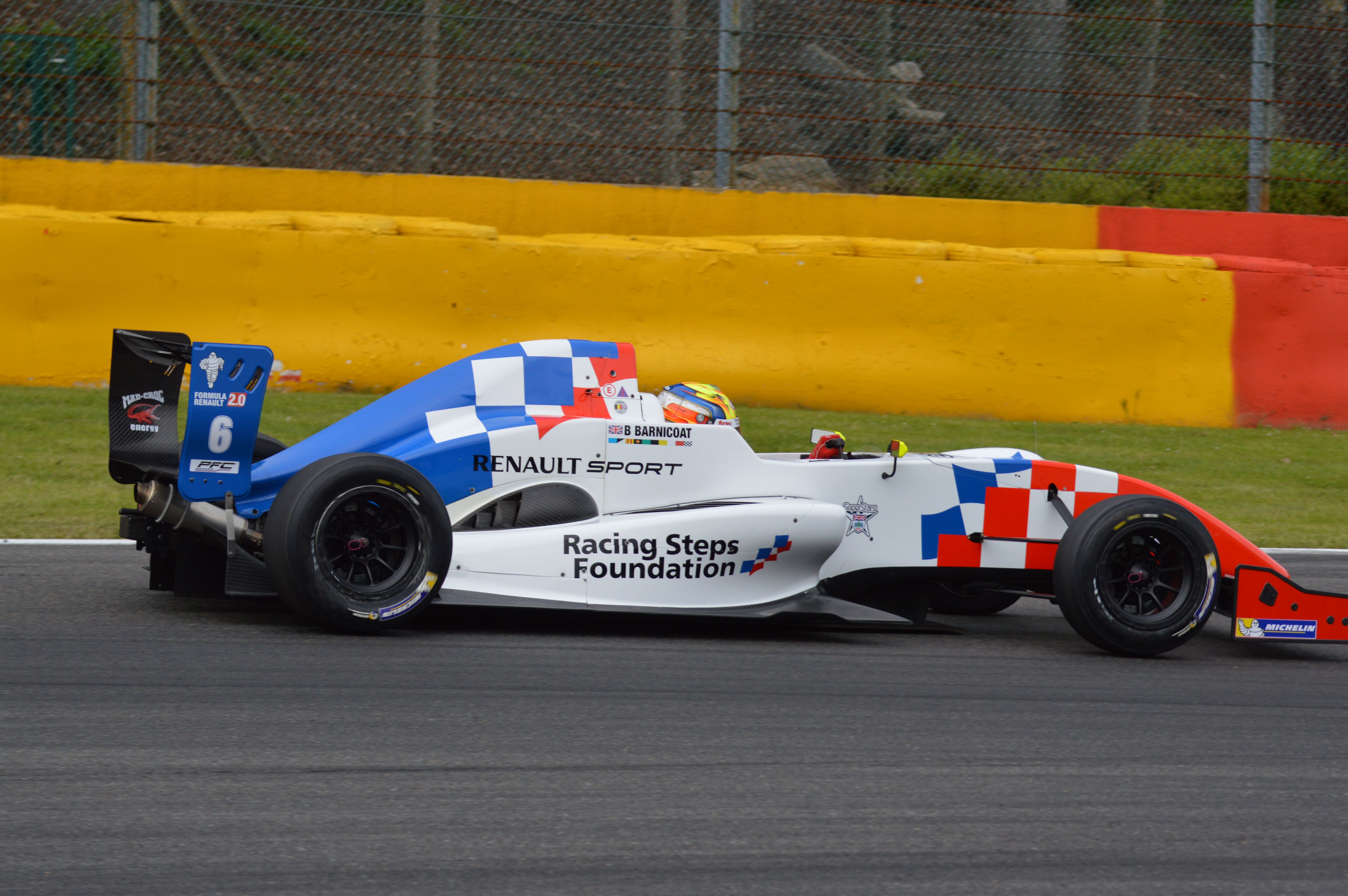 2014 Formula Renault 2.0 NEC champion, Ben Barnicoat (Fortec Motorsports) scored his first pole position and victory in the Eurocup Formula Renault 2.0, becoming the eighth different winner in the category this year. The Racing Steps Foundation backed Englishman took the chequers ahead of team mate Martin Kodri? (Fortec Motorsports), who assured a one-two result for the British team, while also striding on to the podium for the first time. Frenchman Anthoine Hubert (Tech 1 Racing) completed the leading trio of the category at the Nürburgring. Fourth place Louis Delétraz (Josef Kaufmann Racing) slightly increased his lead in the general classification, but five drivers can knock him off the top spot in two weeks at Le Mans.

Due to rain, the start of the race began behind the safety car. After four laps, in which Jehan Daruvala (Fortec Motorsports) and Vasily Romanov (Cram Motorsport) dropped out, the action got underway. Being careful, the leaders held on to their respective positions. Ben Barnicoat let Martin Kodri? have at it with Ukyo Sasahara. The Japanese driver found an opening on lap six, but the Croat quickly answered back. Behind them, Anthoine Hubert had to fend off Louis Delétraz, who got past Kevin Jörg a lap earlier.

A first and a Fortec double

While Ben Barnicoat pulled away, his team mate Martin Kodri? managed to rid himself of Ukyo Sasahara. Among the contenders for the title, Jack Aitken was surprised by Jake Hughes on lap six. Three laps later, Ukyo Sasahara got it wrong and dropped to sixth place, between Kevin Jörg and Jake Hughes, who saw Jack Aitken retake the position he lost just a moment before.

Ben Barnicoat went on for a comfortable win by more than six seconds ahead of Martin Kodri?, who made it a one-two result for Fortec Motorsports. Anthoine Hubert resisted the attack coming from Luis Delétraz to pick up his fifth podium result of the year. Kevin Jörg was fifth ahead of Jack Aitken and Jake Hughes, who both overtook Ukyo Sasahara on the final lap. Jake Hughes, Ignazio D’Agosto (Manor MP Motorsport) and Harrison Scott (AVF) – top rookie in the race – all finished in the points.

Ben Barnicoat: “Qualifying went really well as I took my first pole, although I did do it at Spa before getting a penalty. Starting behind the safety car was the right call as there was a lot of water and with what happened earlier in the year at Motorland, it was safer. I got a good re-start and I knew that I could build a gap in the first three laps. I was then safe and I am very happy with this first victory.”

Martin Kodri?: “At the start, I had to battle with Sasahara. He managed to overtake me, but he then went wide at turn three and I came out of the corner better than he did to retake my position. I knew that I could not catch Ben and I took the decision to assure second place.”

Anthoine Hubert: “Contrary to yesterday, it wasn’t a bad day. I am happy for the team and my mechanics, this podium is my way of thanking them. I saw that Ukyo was too aggressive and that he was going to do a mistake. Once this happened, I wasn’t fast enough so I managed the gap with the guys behind me.”