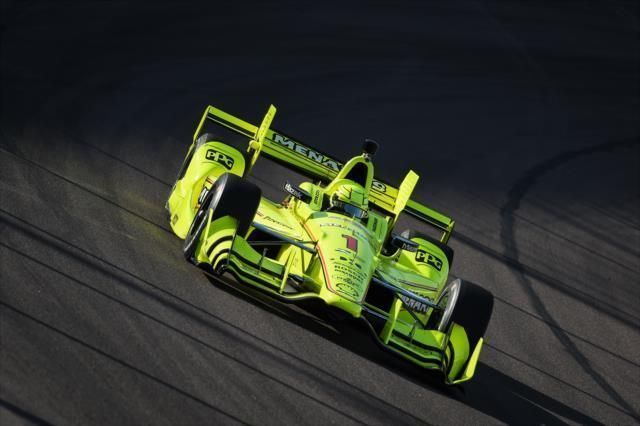 After three races with different winners, IndyCar Series arrived to Phoenix, where the first oval race of the year. On a race that hasn’t been the most thrilling one but has been quite interesting, Pagenaud has taken his first win on an oval course thanks to luck in strategy followed by a solid, fast driving.

Green flag waved but it lasted really short as in the very first corner, Mikhail Aleshin lost the back of the car and hit Sébastien Bourdais. Behind them, Max Chilton, Marco Andretti and Graham Rahal had nowhere to go and couldn’t avoid contact. All drivers involved on the incident retired from the race. Josef Newgarden overtook Will Power and JR Hildebrand before the incident amd moved up to second. During the yellow flag, Ryan Hunter-Reay, Conor Daly and Ed Carpenter did the first Pit stop.

The race re-started in lap 22 and Simon Pagenaud overtook Hildebrand for fourth place. Before the night came, it was being a race without many position changes or interesting points. In lap 69, drivers started to pit and Pagenaud overtook Power. However, when everyone had pitted, Power led ahead of Hélio Castroneves, Pagenaud and Newgarden. Hildebrand, who was running seventh, overtook Scott Dixon in lap 90 and James Hinchcliffe two laps later.

Hildebrand kept progressing and, in lap 119, while leaders were within 2 seconds, he overtook Newgarden. In lap 130, drivers started to make their second Pit Stops. When all leaders but Pagenaud had stopped, a puncture in Takuma Sato‘s car made him go into the wall and caused the second Caution. Pagenaud pitted and, since he was leading by a lap before the incident, he kept on first place. Newgarden had to pit again to repair damage on his front nose.

Race returned to green with only Penske drivers and Hildebrand on the lead lap. In lap 196, drivers like Newgarden or Dixon started third pit stop round, which should be the last stop. After these pit stops, Newgarden was third ahead of Castroneves and Hildebrand.

In lap 223, Hildebrand had overtook Castroneves and Newgarden had damage again on the front due to contact with Hunter-Reay, who had mechanical issues. This put Hildebrand on the podium. Hunter-Reay retired, being the four Andretti cars out for the second time this season, since Alexander Rossi had retired some laps before due to issues caused by a small contact with the wall.

On the last laps, Hildebrand caught Power but couldn’t overtake him. Pagenaud won the Phoenix Grand Prix followed by Power and Hildebrand. Reigning champion gets his first win as a title defender, comes back to the lead of the championship and wins his first race in the Series on an oval course.

Pagenaud leads now general standings with 151 points, followed by Dixon with 141 and Newgarden with 133. Next race will be the Indianapolis GP, the prelude race to Indy 500, which will be held in two weeks and, inmediately after this race on the infield, practice for Indianapolis 500 will begin.