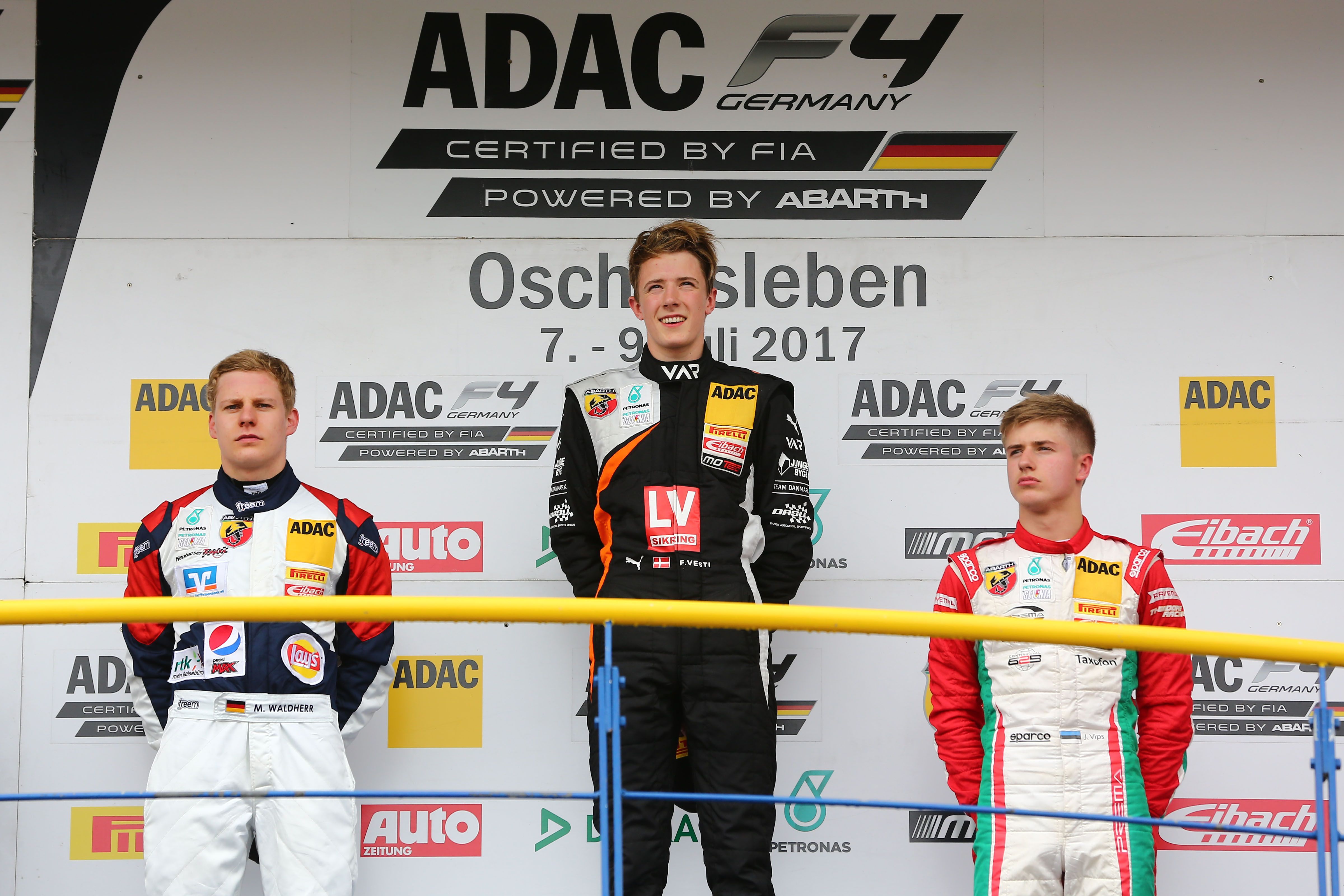 Maiden win for Frederik Vesti – the 15-year-old Dane (Van Amersfoort Racing) celebrated a first ADAC Formula 4 victory at Oschersleben, thereby rounding off a successful weekend for his Dutch team. In difficult conditions on a drying track, Vesti took the chequered flag ahead of polesetter Michael Waldherr (20, Germany, Neuhauser Racing) and Juri Vips (16, Estonia, Prema Powerteam). Vips’s fourth podium finish of the campaign was enough to take him back to the top of the championship.

Vesti overtook Waldherr on the first lap and then proceeded to coolly dominate the race: “This is sensational. I was fast all the way through. I pulled out a lead and then defended it. We were fast all weekend. Maybe not in qualifying, but in the race all the more so.”

After winning Race 2 on Saturday afternoon, Drugovich had to cede the championship top spot to Juri Vips. The Estonian leads on 150 points, closely pursued by Drugovich on 143 and Armstrong on 141. A gap then opens up to the next two contestants – 2016 Best Rookie Nicklas Nielsen (20, Denmark, US Racing) on 93 points, followed by Schramm on 86.

Vesti got off to a perfect start and was level with Waldherr after just a few metres. Four corners later, the Dane got past and quickly pulled out a small cushion on the opposition. In pursuit were 20-year-old Waldherr and Sophia Flörsch (16, Germany, ADAC Berlin-Brandenburg e.V.), but she was soon forced to retire.

While Vesti gradually extended the gap at the front, there was plenty of jostling for position in the midfield. Vips made persistent attacking moves on Waldherr while Schramm hovered behind waiting for his chance. When the safety car came out on the track with twelve minutes left on the clock, the field bunched up again. This was for an incident in which rookie Tom Beckhäuser (18, Czech Republic, ADAC Berlin-Brandenburg e.V.) drove into the back of Richard Wagner‘s car (17, Germany, Lechner Racing).

With eight minutes of the race remaining, the restart took place – and again Frederik Vesti pulled away. Waldherr meanwhile consolidated his second place and was delighted at the end of the race to be making his second podium appearance of the year.

The drivers of the ADAC High-Speed Academy now have a four-week break before action resumes on the weekend of 4th – 6th August when the Nürburgring hosts races 13, 14 and 15. There are still nine races to go in this third season of the ADAC Formula 4 series.