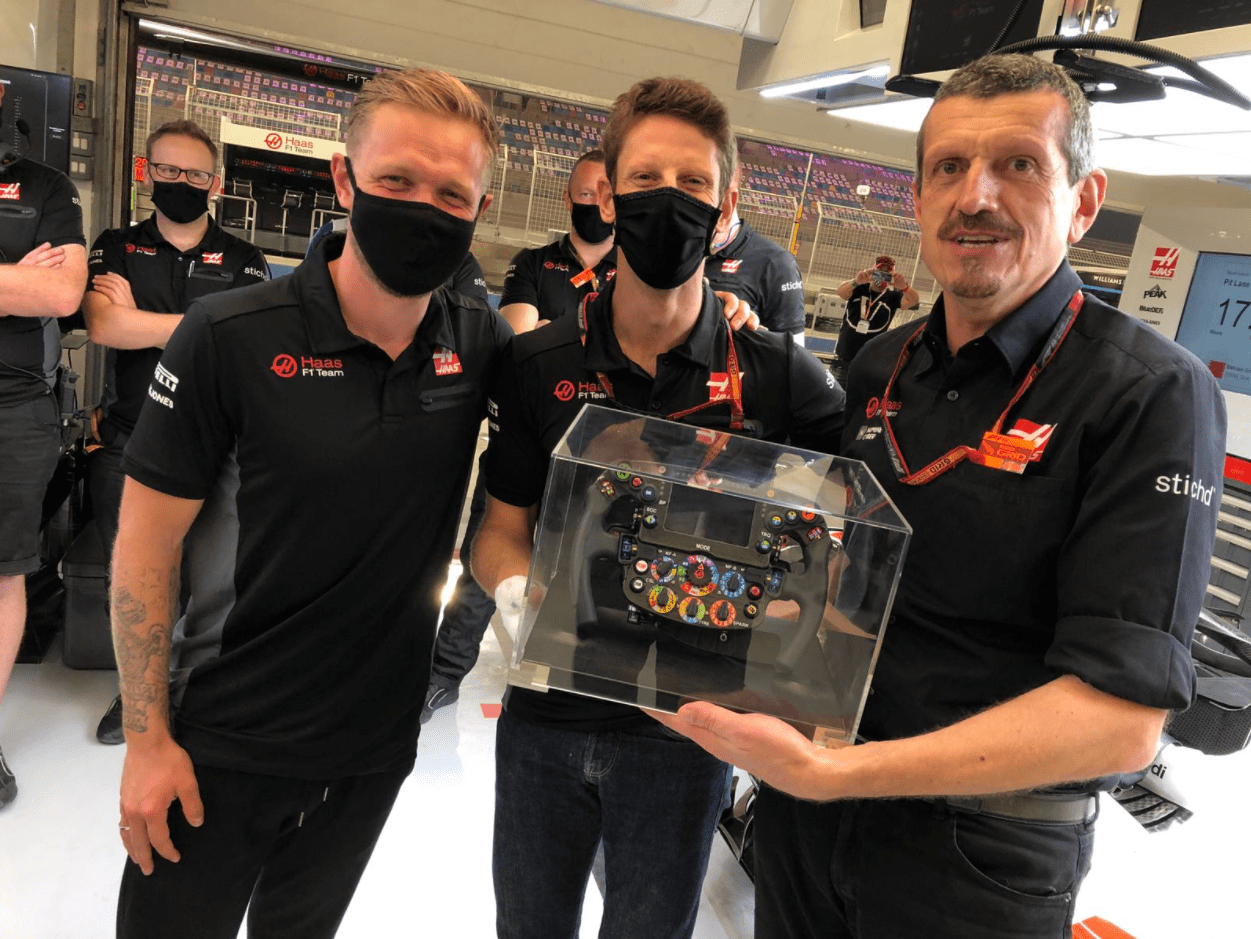 Kevin Magnussen didn’t realise his love for Romain Grosjean until after the F1 Bahrain GP incident as Aero Tec Laboratories releases own statement.

The incident of Haas’ Grosjean shocked everyone two weeks ago at Bahrain International Circuit, as it was one of biggest crashes F1 has seen in current times, especially due to the massive fireball from which the Frenchman had to eject himself out of.

All of his F1 rivals were straightaway concerned about him as he was flown into the military hospital, where he spend three nights. While news of Sebastian Vettel meeting him on Monday morning spread, it was teammate Magnussen, who went on Sunday itself.

This was revealed by Grosjean in one of his interviews from among the multiple he gave. The two have been together at Haas for the last few F1 seasons and have shared a good bond, even though it is not talked upon as much by media or fans.

Even though Magnussen is known for his hard style, his respect for Grosjean could be seen well, over the years. It reflected again post the incident as the Dane admitted that the crash made him realise his love for the Frenchman in a larger way than before.

“I know Romain so well, we’re good friends,” said Magnussen to Ziggo Sport during the Sakhir GP weekend. “When the crash happened, I didn’t know I loved Romain so much. It suddenly becomes very real when it’s someone you know so well. It wasn’t nice. It was a horrible experience,” he summed up.

It was not a long message from Magnussen but an affective one as he noted how much he was already missing Grosjean ahead of the Sakhir GP. There was no disrespect to Pietro Fittipaldi, but he felt he couldn’t reference himself against his teammate.

Fate was such that, the Turkish GP was the final time they would have raced together full-time as Grosjean eventually pulled out of Abu Dhabi GP. The investigation into his crash is on, especially with the FIA looking at it extensively for future safety.

Likewise, one of the key part in the incident, was the fuel cell. Its makers, ATL, released a statement of their own, stating that they are already working with the FIA to understand what went wrong and hope to strengthen the part for better safety, to avoid fireball like that caught out Grosjean.

“Following the accident involving the Haas F1 Team car #8, driven by Romain Grosjean, Aero Tec Laboratories (ATL) would like to state its position on the accident and investigation. At this point in time it would be wrong for ATL to provide comment regarding the fuel leakage that caused a fire to ensue following the car’s impact with the barrier. ATL engineers have begun investigating the cause and drawn initial conclusions from the evidence currently at hand which has been shared with the FIA and Formula 1.

“ATL will be working with the FIA to ensure that all facts are understood with containment and corrective actions put in place at the appropriate time to reduce the risk of such events occurring in the future. All parties continue to strive to ensure that the safety fuel bladders are integrated into the survival cells of all vehicles in such a way that the risk of fire in such an incident is mitigated wherever possible.

“It has been demonstrated that the FIA process of investigation of such accidents leads to effective risk mitigation in the future by various means. ATL wishes to support any advancements that may come from the lessons learned as part of this investigation. This ethos very much aligns with ATL’s own continuous improvement and safety centric culture.

“Formula 1 uses safety fuel bladder materials homologated to the highest standard, FIA/FT5; a standard which has been applied to more and more series worldwide. This standard has proven effective in the harshest of environments and accidents including the World Rally Championship. To provide context, the standard far exceeds that of the highest aviation standards.

“ATL will not provide further comment on the events in Bahrain. We understand that the fuel leakage will be considered in the FIA investigation, the outcome of which is anticipated in 6 to 8 weeks. ATL wishes to take this opportunity to wish Romain Grosjean and his family well and hope that he has a speedy recovery from the injuries he sustained. We would also like to thank all of the FIA team at the event and the other officials, health care workers and volunteers involved in his rescue and care.”