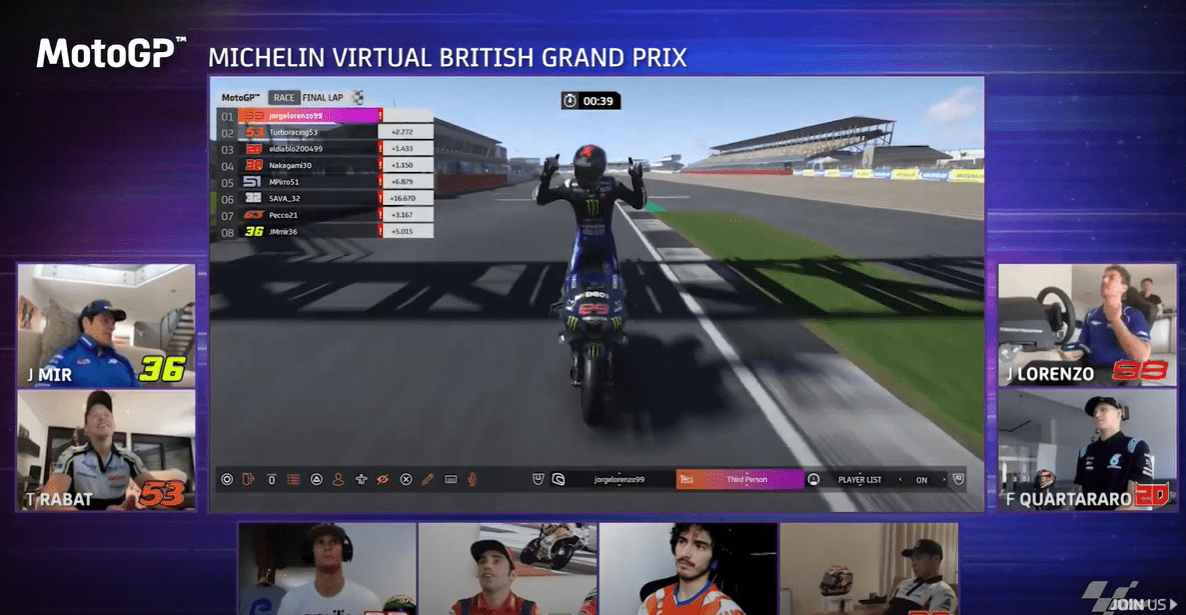 MotoGP hosted its fifth Virtual British GP – dubbed as #StayAtHomeGP – at Silverstone alongside Moto2 and Moto3 with Jorge Lorenzo winning in premier class.

After much success of MotoGP with the four Virtual Race, they returned with the fifth round at Silverstone on the 2020 game by Milestone, with Moto2 and Moto3 returning to the fold. The premier class had a mixed grid with few returning from previous rounds.

The lone new entrant was Yamaha test rider Lorenzo, who took pole ahead of Quartararo and Nakagami. The start saw crashes for both the Spaniard and the Frenchman as the Japanese led the way from Bagnaia and Pirro in the Top 3.

It was then a fightback from Lorenzo and Quartararo, with the former getting on the back of Rabat, who took the lead after a crash for Nakagami. The two Spaniards tussled for the lead with the Yamaha rider eventually going past to take the top spot.

Lorenzo held on until the end to win the British MotoGP Virtual Race on debut with Rabat and Quartararo securing their first podium finishes as the Frenchman fended off Nakagami. The rest of the Top 8 was completed by Pirro, Savadori, Bagnaia and Mir.

On the other hand, the Moto2 race saw Bo Bendsneyder win from Kasma Daniel and Hector Garzo, while the Moto3 event had Stefano Nepa on top from Jeremy Alcoba and Ayumu Sasaki.

Here’s where you can watch Jorge Lorenzo and others in full:

Here’s the latest cancellations of Britain and Australia races