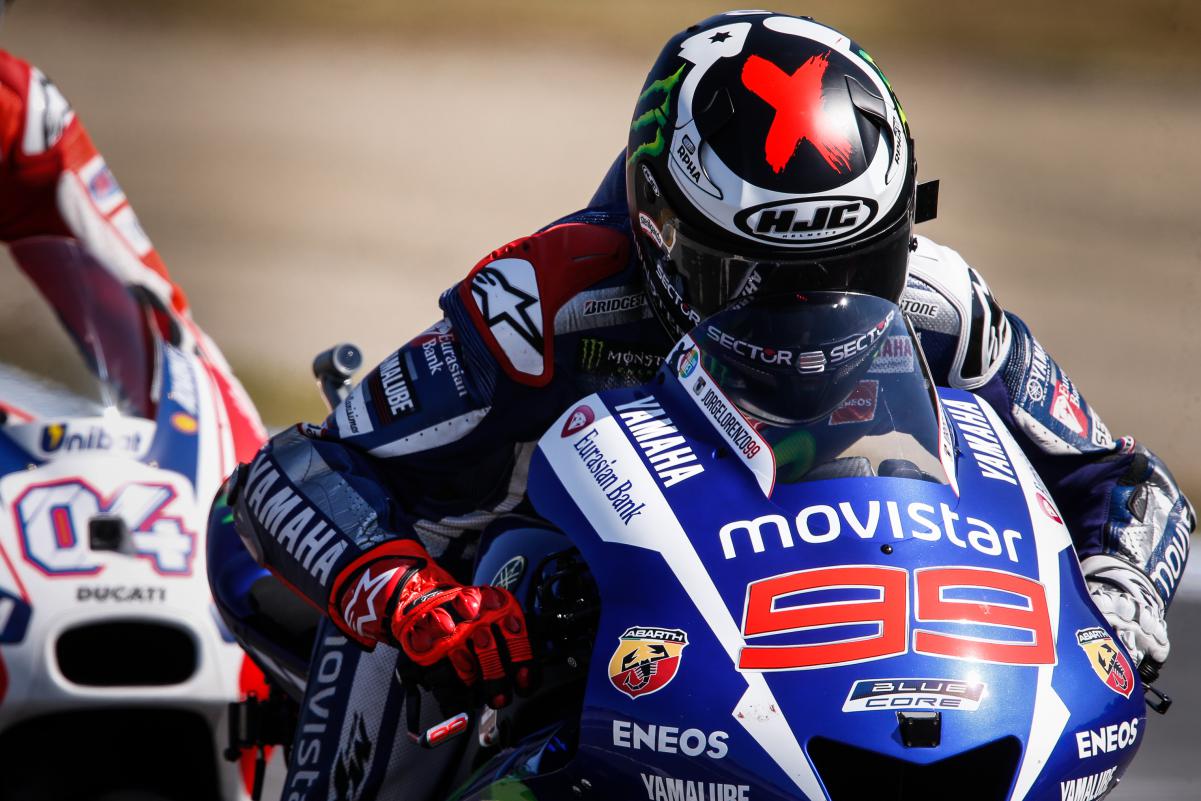 Jorge Lorenzo dominated Friday’s practice to top the combined timesheets ahead of Dani Pedrosa and Andrea Iannone with Rossi in eighth.

Movistar Yamaha’s Lorenzo took advantage of ideal conditions (Track temp. 40?C) at the Twin Ring Motegi to set a 1’44.731 in FP2 to top Friday’s practice. Lorenzo showed no ill effects from the shoulder injury he picked up earlier in the week as he completely dominated proceedings on Friday at the Motul Grand Prix of Japan.

Lorenzo’s time was less than three-tenths off Andrea Dovizioso’s Pole Record from last year (1’44.502) as the Spaniard looks to close the 14-point gap to his teammate Valentino Rossi in the standings.

Repsol Honda’s Pedrosa (+0.128s) seemed buoyed by his podium finish at Aragon and ended the day in second overall after improving by over a second from FP1 to FP2. Ducati Team’s Andrea Iannone was third fastest on a day that saw 0.312s separate the provisional front row. The Italian finished ahead of his teammate Andrea Dovizioso in fourth as just 0.016s separated the two,despite Iannone also carrying a shoulder injury. The Ducati Team GP15’s made use of special cooling ducts to keep the front brakes cool, as did both the Movistar Yamaha team and Team Suzuki Ecstar.

Monster Yamaha Tech 3’s Bradley Smith (+0.519s) impressed as the leading Satellite rider in fifth overall, after he had finished fourth fastest in FP1. Team Suzuki Ecstar’s Aleix Espargaro (+0.617s) was sixth fastest with Repsol Honda’s Marc Marquez in seventh. The reigning MotoGP™ champion was using a modified handlebar to accommodate the broken fifth metacarpal on his left hand and at one point pulled off a remarkable save at turn 8 to stop him from doing any further damage.

Championship leader Rossi found himself down in 8th overall at the end of the day, after ending FP1 in third. Rossi was 0.823s off the pace of Lorenzo and will have work to do on Saturday to try and maintain his 14-point lead.

Pol Espargaro (Monster Yamaha Tech 3) was ninth ahead of the leading Open Class rider, Hector Barbera on the Avintia Racing Ducati, who completed the top ten.

Wildcards Takumi Takahashi (Team HRC With Nissin) and Katsuyuki Nagasuka (Yamaha Factor Racing Team) ended the day in 18th and 23rd respectively despite the latter crashing late on in FP2, while Kousuke Akiyoshi, the replacement for the injured Karel Abraham in the AB Motoracing Team, was in 27th.