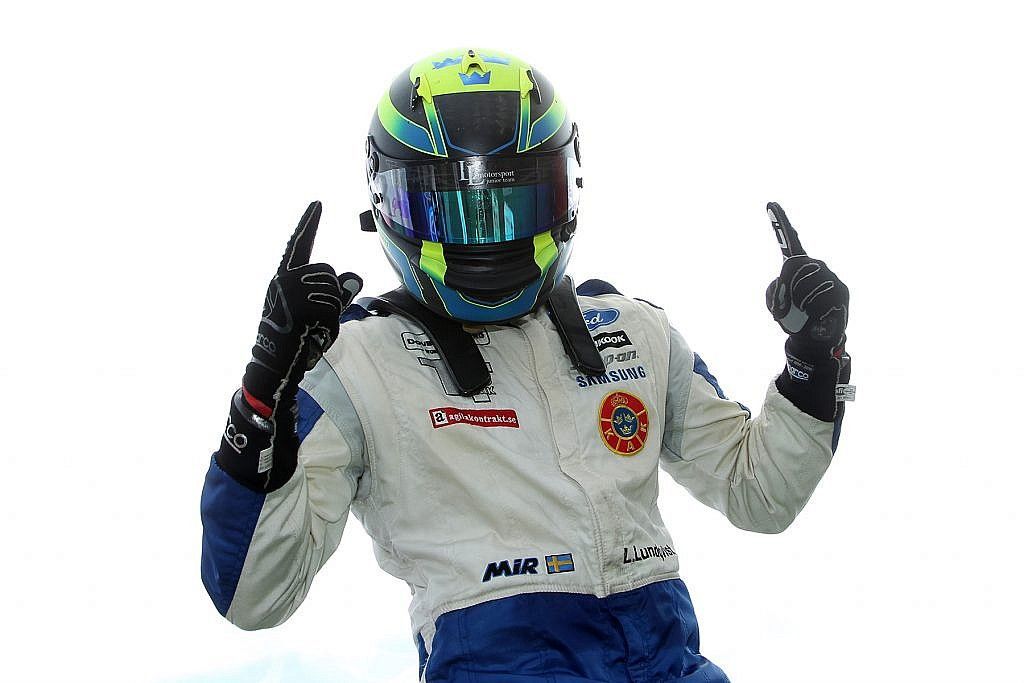 Linus Lundqvist withstood pressure from a fast-starting Oliver York to take a commanding win from pole position in Round 22 of the F4 British.

York sniffed his second victory of the season in the opening exchanges through turns one and two, at one point just nudging in front of Lundqvist. However, the Swede was wise to his advances and kept York pinned to the outside to prevent him from scything past.

The Double R ace then set about pulling a gap and controlled the pace out front on the way to his fourth win of the campaign, with York 1.895 seconds behind.

Another fast starter was Jamie Caroline with lightning reactions off the line from fifth on the grid. The championship leader ran three abreast with Carlin team-mate Logan Sargeant and TRS Arden’s Ayrton Simmons on the run into Deene, running around the outside of the pair to emerge in third place.

Struggling with worn tyres, Caroline was unable to escape Sargeant’s clutches and in the closing stages his mirrors were full of Sargeant’s Ford EcoBoost-powered racer.

Caroline’s saving grace was a better run out of Brooke Chicane lap after lap. It was just enough to prevent Sargeant from getting sufficient slipstream down the straight and around the turn one banking to set up a move into Deene.

As Caroline and Sargeant squabbled, the TRS Arden duo of Ayrton Simmons and Alex Quinn looked to pick up the pieces, but ran out of laps and had to settle for fifth and sixth; ahead of Patrik Pasma whose seventh place earns him pole for the reverse-grid race.

Caroline’s third could prove all the more decisive when taking into consideration the fate of Oscar Piastri in the race. His chief title rival suffered front wing damage early on and then encountered a technical problem which left him dropping down the order despite an impressive rear-guard action which saw him initially keep a gaggle of six cars behind him.

The Aussie ultimately had to retire on lap six after coming into the pits. His first non-finish of the season after a remarkable run of 21 consecutive races in the points.

Jamie Sharp was in fine form for Sharp Motorsport, showing no signs of the balance issues that hampered him on Friday to climb more places than any other driver from 13th to eighth. The Rochdale racer pulled off some perfectly-judged moves, notably a bold dive up the inside of Karl Massaad at Tarzan.

The latter finished ahead of Fortec Motorsports’ Hampus Ericsson who is making a habit of taking Ford F4 Challenge Cup victories, and did so again with his fourth Class win of the campaign with Olli Caldwell (TRS Arden) and Lucca Allen (Falcon Motorsport) completing the podium.

Caldwell found himself facing an uphill battle from lap two after a tangle at Tarzan saw him spun around. The talented teenager was unperturbed though and climbed up to 12th, behind Sam Smelt (GW Motorsport) after entertaining battles with Allen and Carlin’s Lucas Alecco Roy.