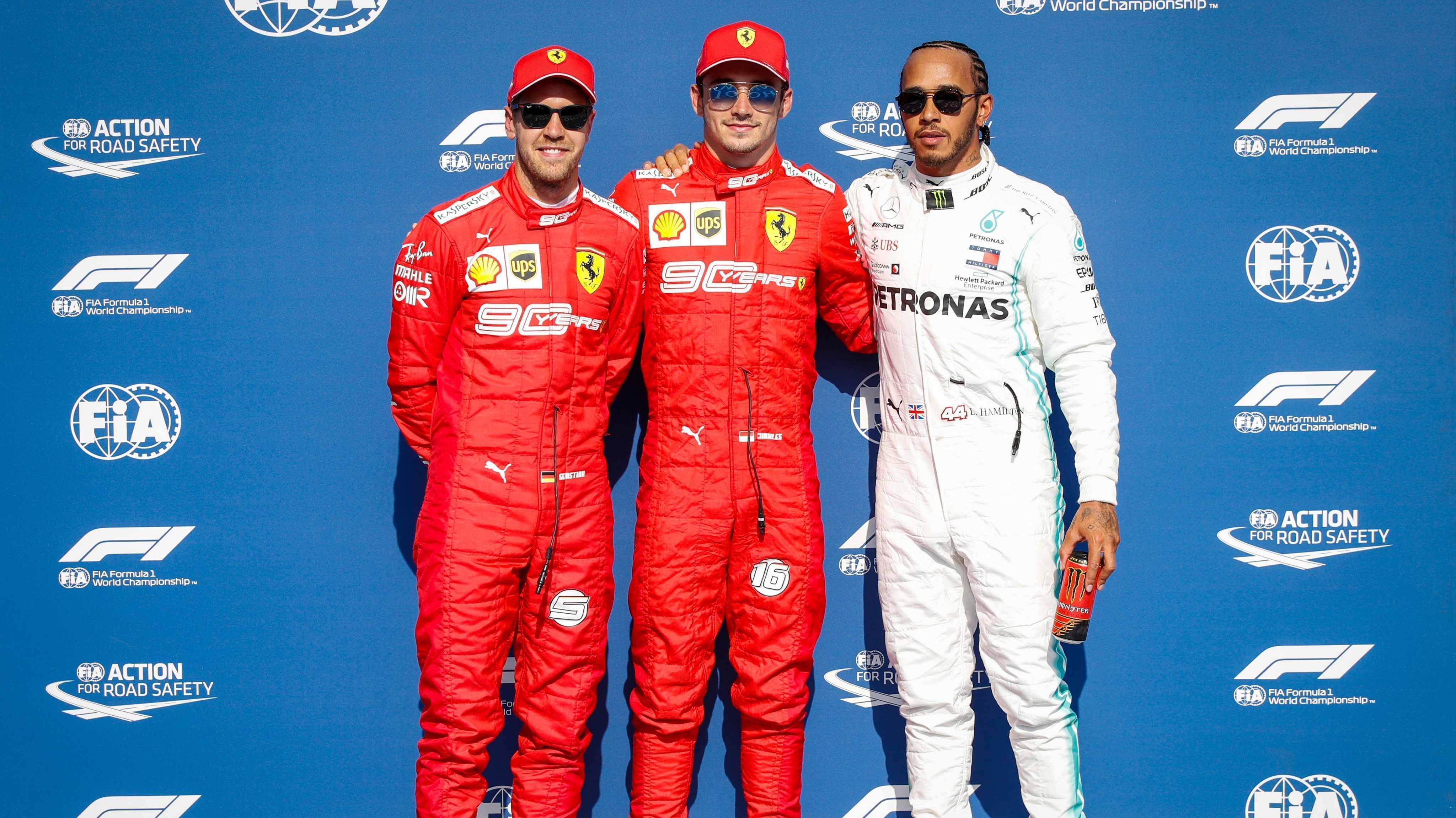 Pole-sitter Charles Leclerc is wary of Ferrari’s race pace for F1 Belgian GP as Mercedes’ Lewis Hamilton says he is up for the fight.

All weekend long, Leclerc and Ferrari have looked solid along with Sebastian Vettel but the Monegasque reckons that their race pace could pose an issue where Mercedes may come back on them.

For Leclerc, it has been anyways a task to keep his tyres alive. He admitted that he needs to work on it before the F1 summer break and Belgian GP will be a chance to showcase if he has managed to get on top of it.

Despite the straightline pace, Leclerc didn’t feel overly confident on Ferrari’s race pace. “The pole obviously feels amazing,” said Leclerc. “It was very tricky, especially in Q3 I struggled quite a lot.

“The start of the lap was always very, very messy, because there was quite a lot of traffic with all the cars around but in the end I managed to do the full lap correctly and I’m very happy.

“I think we have been quick since FP1 but once we did the race simulations in FP2 we weren’t as quick, so I think it’s not going to be easy in the race. We will try to give everything.

“The gap is quite big qualifying but it doesn’t mean it will be like that in the race, so we will working hard to improve on the race run we did on Friday and we will see. On my tyre work, I’ve been analysing quite a lot Hungary.

“Actually, maybe it looked worse than it actually was but there’s definitely some work to do on my side on this. So, we’ll see if it pays off in the race. I changed a few things – very small things – but details always makes the difference at this level.”

It was the sixth consecutive race where he managed to beat Vettel in qualifying – for various reasons, especially after having worked a bit on his style and approach but the German lamented his messy Q3 run.

Vettel said he didn’t feel well in the practice sessions but his qualifying was good until Q3, where the towing made it messy. “I think I was getting into a sort of a rhythm, maybe it took a little bit longer for me to really get a hold of the car but it felt quite good,” said Vettel.

“But then in Q3 it was quite messy, with everybody trying to get a tow and a lot of queuing for the last corner, which made it very tricky and obviously the tyres then are not where they were probably supposed to be and being further back it I think it wasn’t ideal.

“Anyways, Charles did a better job. I felt the car was quite good, which is the most important thing so let’s see in the race with the change in ambient conditions, in track conditions, what the race is going to be like.”

On the Mercedes side, the two situation made it difficult but it was a fightback from Hamilton after his FP3 crash. He not only managed to finish third but beat teammate Valtteri Bottas.

“When you’re on pole, you’re always the happiest, naturally – but nonetheless I’m happy that we have a fight,” said Hamilton. “I think we knew that coming here, that it was going to be challenging.

“We didn’t know where the Red Bulls or Ferraris would be but we knew the Ferraris would be extremely quick given that they’ve been fastest on all the straights throughout the year. Seven-tenths is a huge margin but nonetheless I think in the race trim it looked like it was a lot closer.

“I’m excited that I’m in a position where hopefully I can try and battle the Ferraris and Red Bulls. That makes it more fun for us, for me – and for the fans, hopefully.”

With Alexander Albon out of equation, Red Bull’s Max Verstappen felt that he is in a good place to challenge the Mercedes. He said his qualifying was compromised due to Honda’s mode, which he couldn’t use.

“The whole weekend, we couldn’t use our normal power modes so all the time I wanted to go up on power, like we normally do every weekend, and the engine went into an error,” he said.

“So I had to run quite conservative in qualifying so even compared to our normal power, we were down. It cost us a couple of tenths, which is of course not what you want around Spa, but yeah, that’s how it is.

“We know what the problem is, I need to do two changes on the steering wheel to get it back to normal.”