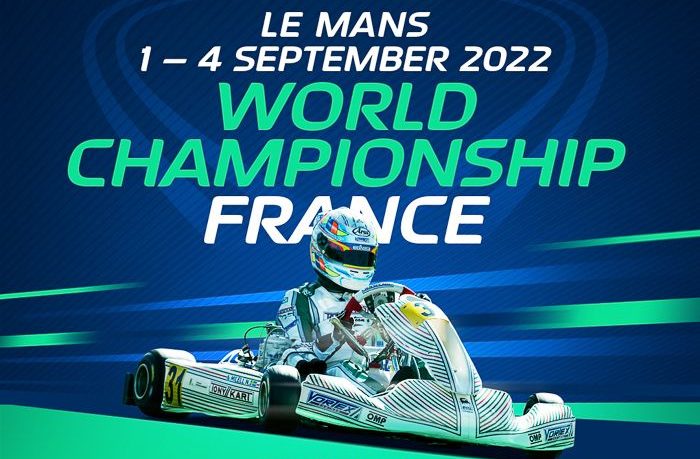 The first of the two world championship events of the 2022 FIA Karting season offers a very attractive program with five categories and more than 320 drivers taking part in Le Mans (FRA) from 1st to 4th September. Fifty-six nations will be represented in France. The event benefits from organisational expertise of the Automobile Club de l’Ouest on the nearby Bugatti circuit, or since 1923 on the legendary 24 Hours circuit.

The CIK-FIA KZ World Championship was organised in 2015 on the 1384m track which replaced the former Alain Prost circuit from 2013. The new Le Mans International Karting Circuit has the modern infrastructure to allow spectators to see the whole site at a glance.
This year, the programme of the penultimate FIA Karting event of the season includes the FIA Karting World Championship – KZ, as well as the KZ2 World Cup, the first edition of the FIA Karting International Masters’ Super Cup – KZ2 reserved for drivers aged 35 and over, and the third and final round of the Academy Trophy. Four FIA Karting titles will therefore be awarded after Sunday’s Finals. The high number of participants reflects the attractiveness of the FIA Karting Championships, Cups and Trophies to competitors.

The 7th edition of the FIA Karting Historic Super Cup is also part of the programme. The 36 karts selected for their role in the history of the discipline will have the opportunity to stage demonstration races.

Live streaming means the competition can be followed remotely from Friday morning to Sunday afternoon. Eurosport will broadcast the Finals live via the Eurosport App, which will help promote karting to a wider global audience.
LeCont is the exclusive supplier of tyres in the four FIA Karting categories competing at Le Mans.

KZ: the domain of the pros.

At the top of the bill, the FIA Karting World Championship – KZ has been renewing its participants over the last few seasons with the rise of new drivers to the top of the rankings. In the KZ category are most of the current professional karting drivers representing the main factories. Reigning champion Noah Milell from Sweden, Frenchman Jérémy Iglesias, Dutchman Marijn Kremers, Spain’s Pedro Hiltbrand, Italy’s Lorenzo Travisanutto, winner of the International Super Cup – KZ2 last year, and Dutchman Jorrit Pex, crowned at Le Mans in 2015, have a total of seven world titles in different categories. There is no shortage of European KZ Champions either, starting with Italian Paolo Ippolito who won this year. Former F1 driver Jaime Alguersuari (ESP), who finished 9th in the World KZ Championship in 2013, wanted to return to karting after the missed the opportunity in 2021. Anthony Abbasse (FRA) will come out of retirement once again to rediscover the pleasure of racing at a high level in a single event, as he did in 2021. Matteo Vigano (ITA), Émilien Denner (FRA), Senna van Walstijn (NLD) and Simo Puhakka (FIN), who has been very competitive this season, are added to the list of favourites.

Formerly known as the FIA Karting International Super Cup since 2013, this world event in the KZ2 category will be known as the World Cup from this year onwards. Only 36 of the 126 drivers entered in Le Mans will progress to the Final following intense Qualifying phases. The recent European Championship standings give a good indication of the talents at work this year in KZ2. Frenchman Tom Leuillet’s double European Championship winner was a highlight, while Germany’s David Trefilov and Italian Alessio Piccini joined him in the top three. Besides Tom Leuillet, the French delegation includes several drivers to follow like Arthur Carbonnel, Thomas Imbourg, Hubert Petit or the rising star Matteo Spirgel. Jean Luyet (CHE) will try to win the title again after his remarkable performance last year. Danilo Albanese and Giuseppe Palomba are probably the best Italian chances. Young drivers with a good reputation in OK, Arvid Lindblad (GBR) and Cristian Bertuca (ITA) will continue their experience in KZ2 after their remarkable debut at European level.

Sixty-nine drivers have responded favourably to the creation of the FIA Karting Masters International Super Cup – KZ2 and there is no shortage of talent among the entries. They will compete on karts corresponding to the KZ2 regulations, but with a minimum weight of 180 kg including the driver. There is no international competition benchmark to compare the potential of the participants in this first competition. However, multiple Italian World Champion Davide Fore’ will be at the top of the predictions based on his exceptional career, his physical form and his intact motivation. Dutchman Nick De Bruijn, 2004 European Champion in Formula A, is a potential rival to the pack of French drivers who are determined to shine on a circuit they know well, with Charles Fiault, Thomas Letailleur, Johan Renaux, Emmanuel Ducrot, Julien Le Brigand and Paul David in the lead. The Belgians Thierry Delré and Bertrand Grooten and the Italians Roberto Profico and Andrea Tonoli also stand out thanks to their track record.

A favourite and several outsiders in the Academy.

Like last year, the battle for the FIA Karting Academy Trophy looks very open as the third and final round approaches. The leader of the provisional standings is looking for his first victory while two different winners, Arthur Dorison (FRA) and Matias Orjuela (COL) have already won. Of the other drivers who are mathematically in a position to win the 2022 Trophy, William John Riley Go (PHL) and Aleksandar Bogunovič (SVN) are certainly the best placed. The Exprit/Vortex/LeCont one-design karts will allow the 54 entrants from 53 nations to compete one last time this season.

The Le Mans event can be followed on the official FIA Karting Championship app for mobile devices and on the website.