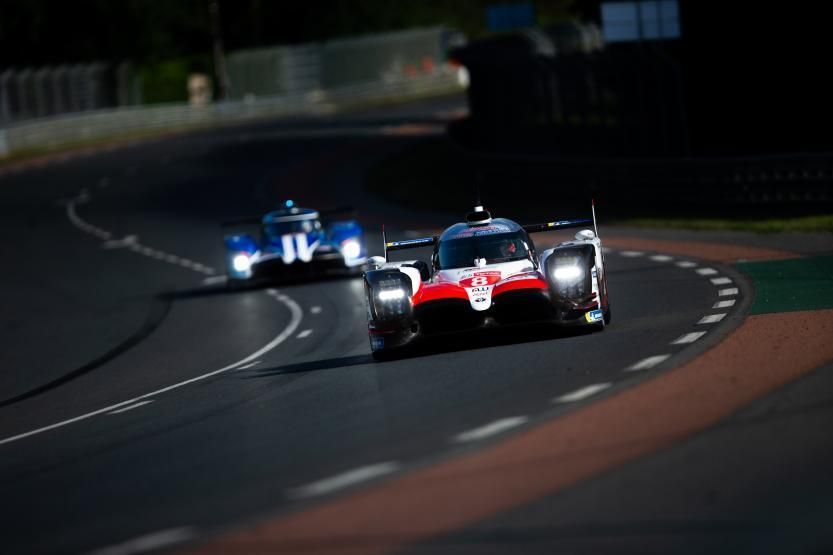 The LMP1 field continued to be led by the two Toyotas as the #8 entry of Kazuki Nakajima, Fernando Alonso and Sebastien Buemi took provisional pole for the 2018 Le Mans 24 Hours after the first Qualifying Practice on Wednesday night at La Sarthe.

It was Nakajima’s 3m17.270s laptime in his first stint which stood as the best overall in the two-hour session with #7 Toyota’s Kamui Kobayashi (sharing with Mike Conway and Jose Maria Lopez) falling short by a 0.107s with a 3m17.377s laptime.

Two-time Formula 1 champion Alonso got his first chance only after the stints from Nakajima and Buemi, with the Spaniard undertaking the mandatory night running in the TS050 Hybrid for his first-ever Le Mans qualifying.

In third, over two seconds behind the leading Toyota was the #17 SMP Racing car after a 3m19.483s laptime from experienced Stephane Sarrazin (sharing with Egor Orudzhev and Matevos Isaakyan).

The Russian outfit beat #1 Rebellion Racing which did a 3m19.662s laptime with Andre Lotterer, Neel Jani and Bruno Senna sharing. It led its sister #3 car of Mathias Beche, Thomas Laurent and Gustavo Menezes – which clocked a 3m19.945s laptime.

The #10 DragonSpeed outfit finished sixth with a time of 3m21.110s with Henrik Hedman, Ben Hanley and Renger van der Zande leading the second #11 SMP Racing of Vitaly Petrov, Jenson Button and Mikhail Aleshin – they clocked a time of 3m21.408s.

The 2009 F1 champion Button also successfully completed his first night running. The #4 ByKolles was eighth overall with a time of 3m22.505s – the team comprising of Tom Dillmann, Oliver Webb and Dominik Kraihamer.

The LMP1 class was rounded out by the two CEFC TRSM Racing Manors with the #5 finishing 11th overall and the #6 in 23rd – clocking a time of 3m26.246s and 3m30.339s respectively. Both the cars started late after on-going work post the practice session.

Meanwhile, the LMP2 class was headed by the #48 IDEC Sport Oreca of Paul Lafargue, Paul-Loup Chatin and Memo Rojas with a time of 3m24.956s. They finished ninth overall after displacing early leaders, the #28 TDS Racing Oreca.

The WEC entered team finished 10th overall with a time of 3m25.240s – the team comprising of Loic Duval, Matthieu Vaxiviere and Francois Perrodo. The Top 3 in LMP2 class was rounded out by #26 G-Drive Racing Oreca.

The team of Jean-Eric Vergne, Roman Rusinov and Andrea Pizzitola clocked a time of 3m26.447s to be 12th overall. It was close in LMP2 as positions from 12th to 15th was covered by only 0.325s – comprising of #31 DragonSpeed, #36 Signatech and #22 United Autosports outfits.

The GTE-PRO class provisional pole is held by #91 Porsche GT Team after a lap of 3m47.504s from Gianmarina Bruni (sharing with Richard Lietz and Frederic Makowiecki) – the outfit were forced to miss the session after an off for Bruni just after the pole lap.

It leads the sister #92 Porsche with #66 Ford in third. At the same time, the GTE-AM class pole is held by the #88 Dempsey-Proton Racing with a time of 3m50.728s – the team comprising of Matteo Cairoli, Giorgio Roda and Khaled Al Qubaisi.