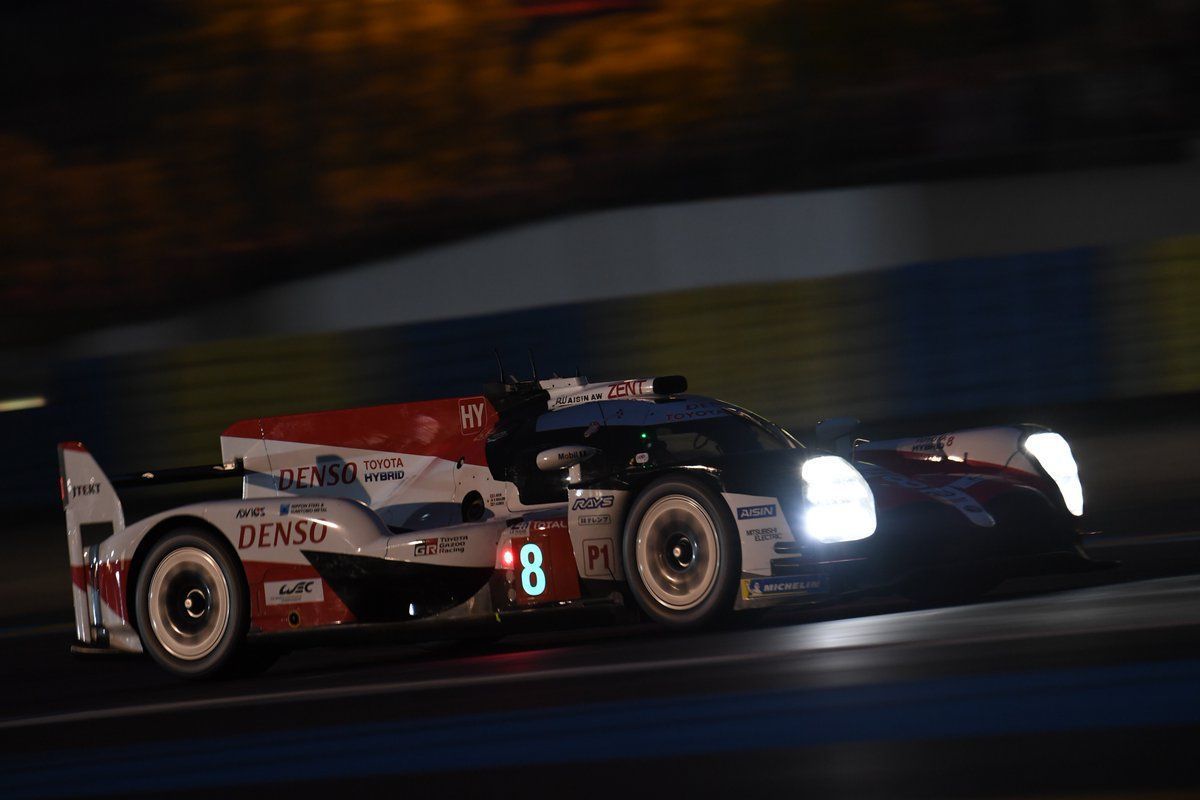 The final qualifying session in the Le Mans 24 Hours on Thursday saw host of changes in the order but the Top 2 positions remained the same as the #8 Toyota claimed pole in the 86th running at La Sarthe from its sister #7 car.

Only the #8 could improve with Kazuki Nakajima (sharing with Fernando Alonso and Sebastien Buemi) going nearly two seconds quicker from is QP1 time to clock in a 3m15.377s in the early stages of an extended session to cover for the lost time in QP2.

However, Kamui Kobayashi (sharing with Mike Conway and Jose Maria Lopez) couldn’t make most of the opportunity as they had to settle for second after his QP1’s time of 3m17.377s – in the end he finished exactly two seconds behind the sister #8 car.

The two Rebellion Racing cars also improved early in the session to displace #17 SMP Racing from third. It was the #3 Rebellion driven by Thomas Laurent (sharing with Mathias Beche and Gustavo Menezes) which took third after his time of 3m18.252s.

Laurent pipped the sister #1 Rebellion after Bruno Senna (sharing with Neel Jani and Andre Lotterer) put it in third with a time of 3m19.449s) – they had to settle for fourth in the end ahead of the SMP Racing car.

The #17 crew of Stephane Sarrazin, Matevos Isaakyan and Egor Orudzhe made no improvement on their 3m19.483s laptime from QP1. Even the sister #11 car had to be content with their QP1 time of 3m21.408s after they encountered clutch troubles.

The Russian outfit had a torrid time in QP3 with the #17 crew doing only eight laps, while the #11 crew of Vitaly Petrov, Jenson Button and Mikhail Aleshin unable to do any laps – thereby having to settle for seventh overall.

Sandwiched in sixth by the two SMP Racing cars was the #10 DragonSpeed of Henrik Hedman, Ben Hanley and Renger van der Zande. They also didn’t improve on their QP1 time of 3m21.110s.

While the #8 ByKolles (Tom Dillmann, Oliver Webb and Dominik Kraihamer) also couldn’t go quicker, but both the Manor Ginettas did improve even though they finished ninth and 10th overall – importantly, they were ahead of the LMP2 cars.

The ByKolles’ 3m22.505s time from QP1 remained, while the #6 driven by Oliver Rowland (sharing with Alex Brundle and Oliver Turvey) improved to a 3m23.757s laptime with the #5 driven by Leo Roussel (sharing with Mark Simpson and Charlie Robertson) moving to 10th with a time of 3m24.763s.

They were only marginally ahead though after the LMP2 grid was shaken-up with raft of improvements. The #28 TDS Racing Oreca driven by Loic Duval (sharing with Matthieu Vaxiviere and Francois Perrodo) claimed pole after a 3m24.816s laptime.

The team were second to the #48 IDEC Sport Oreca in QP1 and QP2 but found time in the final session to snatch the top spot despite improvement from Paul-Loup Chatin to clock a 3m24.842s) in the #48 car (sharing with Paul Lafargue and Memo Rojas).

While they were separated by a mere 0.026s but the Top 3 were only 0.067s apart after Nathanael Berthon improved to a 3m24.883s time in the #31 DragonSpeed shared with Pastor Maldonado and Roberto Gonzalez.

The manage to drop #26 G-Drive Racing car of Jean-Eric Vergne, Roman Rusinov and Andrea Pizzitola which also improved to a 3m25.160s. One of the bigger movers in LMP2 was the #23 Panis Barthez Competition Ligier to move to fifth and 15th overall.

They made up seven places in class after Will Stevens (sharing with Julien Canal and Thimothe Buret) improvement of nearly four seconds with a time of 3m25.376s. The #36 Signatech lost couple of places to sixth and 16th overall after no improvement from them.

The lap of 3m47.504s from Gianmarina Bruni in QP1 after which he crashed the #91 Porsche GT Team car (shared with Richard Lietz and Frederic Makowiecki) remained unbeatable in the GTE-Pro as the #92 made it a Porsche 1-2 after its improvement to 3m49.097s shared by Laurens Vanthoor, Kevin Estre and Michael Christensen.

Even after an improvement to 3m49.181s by the #66 Ford shared by Stefan Mucke, Olivier Pla and Billy Johnson, the team remained third ahead of the #51 Ferrari (James Calado, Daniel Serra and Alessandro Pier Guidi).

The #88 Dempsey-Proton Racing of Matteo Cairoli, Giorgio Roda and Khaled Al Qubaisi took GTE-Am pole after the crew improved further to a time of 3m50.728s – impressively they managed to beat a lot of Pro class cars by a good margin.

The session ended with a Porsche 1-2-3 after the #86 Gulf Racing Porsche shared by Ben Barker, Alex Davison and Micahel Wanwright improved to second while the #77 sister Dempsey driven by Matt Campbell, Julien Andlauer and Christian Ried were third.

UPDATE: Several penalties and laptimes deletion post session saw the #1 Rebellion lose its fourth place to drop to fifth, promoting the #17 SMP Racing to fourth, while the #5 Manor dropped to 14th overall.

It was a major shake-up in the LMP2 class with pole-sitter #28 TDS Racing had their laptimes deleted – which meant the #48 IDEC Sport were back on the top spot to take pole with #31 DragonSpeed in second and #26 G-Drive in third – the #28 dropped to fourth.