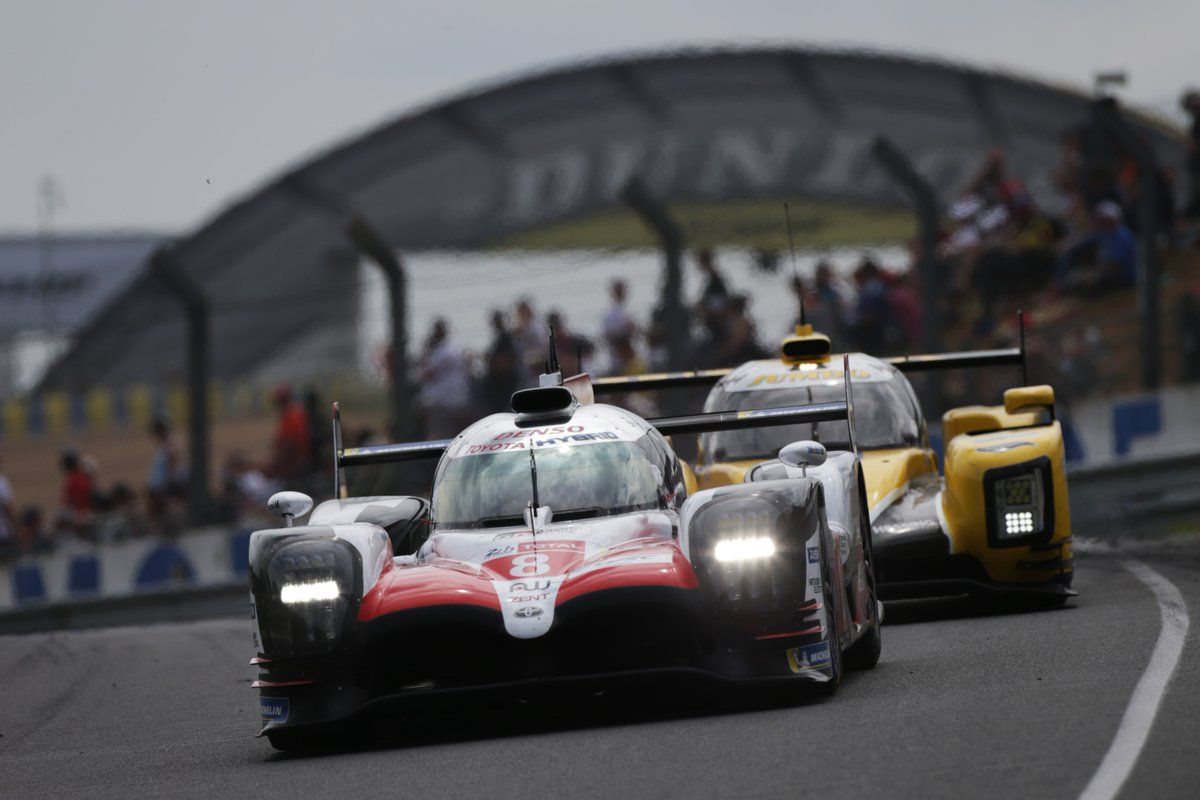 The pole-sitting #8 Toyota of Kazuki Nakajima, Fernando Alonso and Sebastien Buemi holds advantage over sister #7 Toyota in the 2018 edition of Le Mans 24 Hours race after six hours of racing at La Sarthe.

The #7 crew of Kamui Kobayashi, Mike Conway and Jose Maria Lopez sits second over 12s behind. The #7 had been ahead of the #8 multiple times, but twice in Alonso’s stint, he passed Lopez for the race lead despite the #7 having to do an extra stop for a puncture.

The #17 SMP Racing crew of Stephane Sarrazin, Egor Orudzev and Matevos Isaakyan holds third – albeit a lap down on the Toyotas. The Russian outfit had been racing the #3 Rebellion Racing car of Mathias Beche, Thomas Laurent and Gustavo Menezes.

After its first-lap incident courtesy Andre Lotterer (sharing with Neel Jani and Bruno Senna), the #1 Rebellion Racing is fifth but is a further lap away from the Top 4. Lotterer hit the back of the #8 Toyota while also spun the #10 DragonSpeed.

The team of Henrik Hedman, Ben Hanley and Renger van der Zande as a result dropped down the order to mix with the LMP2 but has since recovered to 13th overall and sixth in LMP1, well ahead of the two CEFC TRSM Racing Manors.

The #5 crew of Leo Roussel, Mark Simpson and Charlie Robertson is seventh with #6 of Oliver Rowland, Alex Brundle and Oliver Turvey behind amid the LMP2 cars. Meanwhile, the bottom of the LMP1 category has #4 ByKolles and the #11 SMP Racing.

The #4 crew of Tom Dillmann, Oliver Webb and Dominik Kraihamer had a slow start to drop behind before gradually coming back into the order but a heavy crash under four hours with a GTE car has left it at the bottom ahead of the #11.

The Jenson Button, Vitaly Petrov and Mikhail Aleshin-led crew suffered a sensor issue which kept them in the pits for a major part of the race. Meanwhile, the LMP2 class was led by the #26 G-Drive Racing Oreca of Jean-Eric Vergne, Roman Rusinov and Andrea Pizzitola.

Vergne put them in a commanding lead during his stint with the #23 Panis Barthez Competition Ligier of Will Stevens, Julien Canal and Thimothe Buret in second ahead of the #36 Signatech Alpine of Nicolas Lapierre, Andre Negrao and Pierre Thiriet.

The GTE-Pro class battle was nip and tail with the #92 Porsche of Laurens Vanthoor, Kevin Estre and Michael Christensen in a commanding lead over a tussling #93 Porsche of Nick Tandy, Earl Bamber and Patrick Pilet and #81 BMW of Nicky Catsburg, Phillip Eng and Martin Tomczyk.

The pole-sitting #91 Porsche of Gianmarina Bruni Richard Lietz and Frederic Makowiecki were fourth after they had to give up the lead with the Fords coming through to catch them. The safety car further played into the hands of the Fords as well as BMW.

At the six hour mark, the leading Ford was the #68 of Sebastien Bourdais, Joey Hand and Dirk Muller in fifth, a lap down already on the GTE-Pro class leaders. The #77 Dempsey Proton Porsche of Matt Campbell, Julien Andlauer and Christian Ried led the GTE-Am class.

The crew held a commanding lead over the #56 Team Project 1 Porsche of Jorg Bergmeister, Patrick Lindsey and Egidio Perfetti and #53 Spirit of Race Ferrari of Giancarlo Fisichella, Thomas Flohr and Francesco Castellacci.