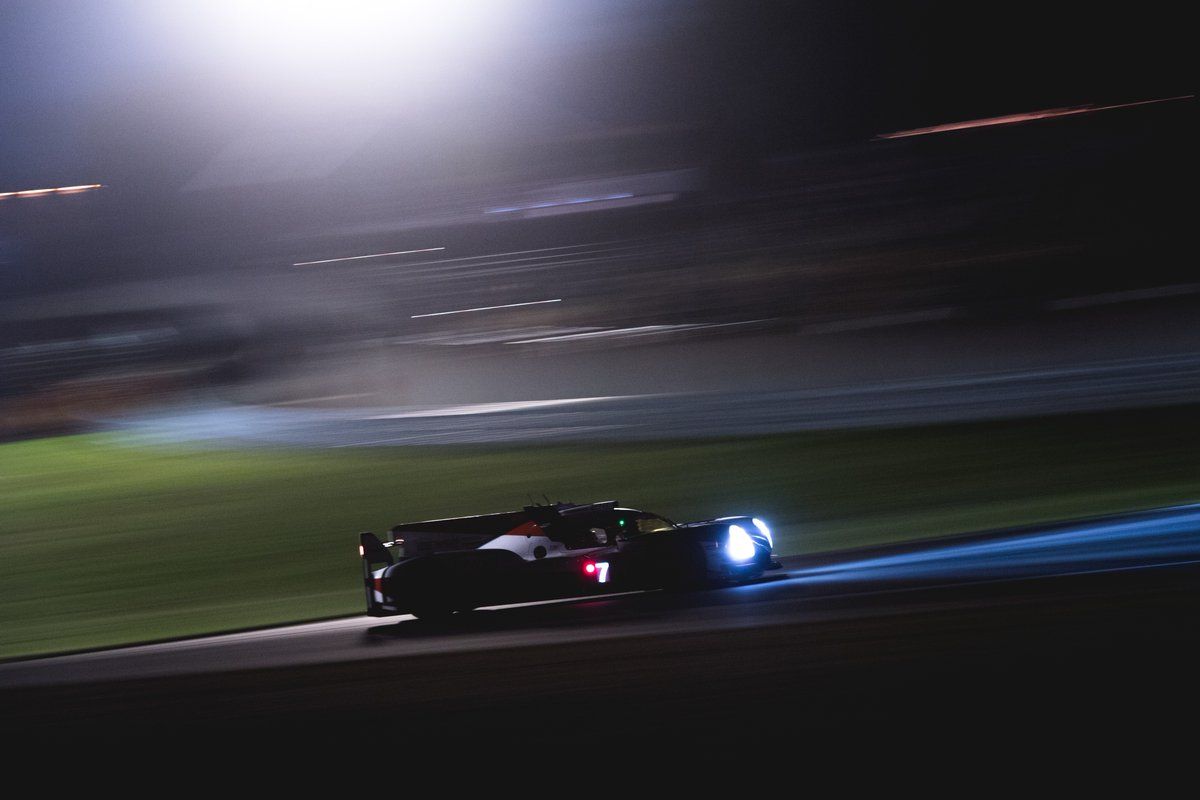 A one minute stop and go penalty for speeding under slow zone for the #8 Toyota for Sebastien Buemi (sharing with Fernando Alonso and Kazuki Nakajima) put them on the backfoot in their Le Mans 24 Hours victory battle against #7 Toyota at halfway mark.

Buemi handed the car to Alonso for his night stint while the lead #7 car being driven by Jose Maria Lopez (sharing with Kamui Kobayashi and Mike Conway) at 12 hour mark. The Spaniard then started to lap significantly quicker to bring back the gap down.

It sits 1m15.236s after 12 hours with the two Japanese manufacturer cars way ahead of the two Rebellion Racing non-hybrids LMP1 machines. It was a terrible luck for the #17 SMP Racing crew after Matevos Isaakyan spun and hit the barrier from third as night fell.

The Russian fought for laps to get the car going again only for it catch fire and the race control pulling up the team manager, forcing them to stop and officially retire after eight hours of running.

This helped the #3 Rebellion of Mathias Beche, Thomas Laurent and Gustavo Menezes into a comfortable third albeit five laps down with the sister #1 car of Andre Lotterer, Bruno Senna and Neel Jani another lap down in fourth.

Joining the #17 in the retirement list was the #4 ByKolles of Tom Dillmann, Oliver Webb and Dominik Kraihamer while the #10 DragonSpeed, the two CEFC TRSM Racing Manors and the #11 SMP Racing were still running but quite a way down.

The #10 crew of Henrik Hedman, Ben Hanley and Renger van der Zande are fifth in LMP1 but runs 22nd overall with the #5 Manor of Leo Roussel, Mark Simpson and Charlie Robertson sixth but running 49th overall.

After lengthy stop for the #6 crew of Oliver Rowland, Alex Brundle and Oliver Turvey, it fell behind the recovering #11 SMP Racing of Vitaly Petrov, Jenson Button and Mikhail Aleshin – the two cars running seventh & eighth in class and 54th & 55th respectively overall.

The mishaps for the LMP1 cars helped the longtime LMP2 leader #26 G-Drive Racing Oreca of Jean-Eric Vergne, Roman Rusinov and Andrea Pizzitola in fifth overall as they sit one lap clear of their competition for class honours.

It is tight behind with the #36 Signatech Alipne of Nicolas Lapierre, Andre Negrao and Pierre Thiriet taking second just at the brink of 12 hours from the #23 Panis Barthez Competition Ligier of Will Stevens, Julien Canal and Thimothe Buret.

The GTE-Pro class is still headed by the #92 Porsche GT Team of Laurens Vanthoor, Kevin Estre and Michael Christensen as they moved up to 24th overall – again like LMP2, they are a lap ahead of their competition.

After early troubles, the #91 Porsche of Gianmarina Bruni Richard Lietz and Frederic Makowiecki moved up to second, marginally ahead of the #68 Ford of Sebastien Bourdais, Joey Hand and Dirk Muller.

The #52 AF Corse Ferrari of Antonio Giovinazzi, Pipo Derani and Toni Vilander also improved on their position to be a steady fourth, comfortably ahead of the #67 Ford of Tony Kanaan, Harry Tincknell and Andy Priaulx.

Meanwhile, the GTE-Am class also have a stagnant leader in the form of the #77 Dempsey Proton Porsche of Matt Campbell, Julien Andlauer and Christian Ried as the #85 Keating Motorsports Ferrari of Jeroen Bleekemolen, Ben Keating and Luca Stolz in second.

It is spread out as the #84 JMW Motorsport Ferrari of Liam Griffin, Cooper MacNeil and Jeff Segal sits third as the Top 3 have a lap advantage over the rest of the field led by #54 Spirit of Race Ferrari of Giancarlo Fisichella, Thomas Flohr and Francesco Castellacci.