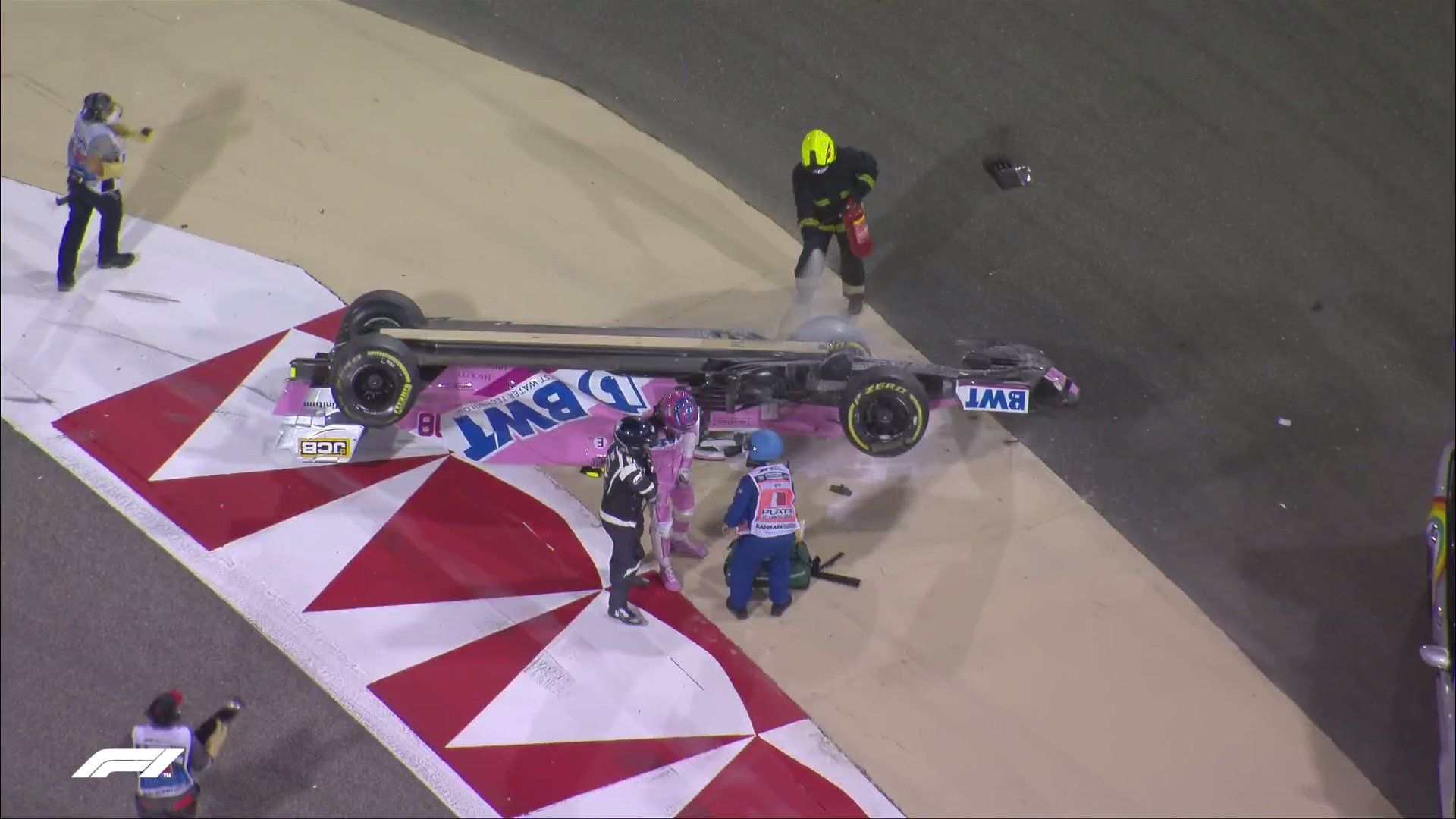 Daniil Kvyat disagrees with a penalty levied against him for a crash with Lance Stroll in F1 Bahrain GP as Alexander Albon talks about podium.

The former incident occurred at Turn 8 during Bahrain GP, in the wake of the alarming crash suffered by Haas driver Romain Grosjean, which put off the continuation of the F1 race for just shy of an hour and a half as marshals tended to the wreckage.

With Kvyat’s AlphaTauri clipping the right-rear of Stroll’s Racing Point as they approached the corner, the latter was pitched onto its side and completed a roll before coming to a rest on its roof. This was the Russian’s second incident after Grosjean.

Stroll clambered out of his stricken RP20 and was driven away from the scene hurriedly, with the incident bringing out a safety car. Deemed by stewards to have caused the accident, Kvyat was given two penalty points on his superlicence, and had ten seconds added to his race time.

The Russian was displeased with the penalty, candidly stating that he disagrees with the decision of the race stewards, and saying that the punitive action “ruined his race”. “I was fully on the inside of him and even if I think saw me he chose to turn in like I wasn’t there,” said Kvyat. “I put my whole car on the inside of the kerb and there wasn’t much more I could have done.

“So, I don’t share the same view as the Stewards regarding my penalty. It’s a shame they took this decision because it ruined my race. I’m upset but nothing will change the outcome, unfortunately,” Kvyat summed up after finishing 11th still, whereas teammate Pierre Gasly ended up sixth eventually.

Stroll was particularly peeved by the incident as it cost him a chance at sorely-needed points, and he explained, pointedly, that Kvyat had “come out of nowhere” and ended his race prematurely. “We’ve scored two points since Monza and it’s been a series of incidents outside of my control that’s caused it,” he said.

“At one point this season we were P4 in the Drivers’ Championship and we’d had such a strong start to the year, so that makes the current situation all the more frustrating. I can’t say much about today’s incident, I was going through Turn 8 and was mid-corner when I was hit by Daniil [Kvyat] who came out of nowhere and connected with me. The crash looked worse than it was: I’m ok, and Daniil got a penalty.

“There’s no point thinking about what could have been today or in the previous events. We won’t dwell on it because there’s nothing we can do about it now,” Stroll said, as the Canadian’s bad run continues with just one points finish in seven rounds since Monza.

It was one headline-grabbing incident overshadowed by Grosjean’s devastating shunt, with another coming in the race’s dying laps. This wasn’t it for Racing Point as a Perez DNF robbed the team of any consolation they might have received after Stroll’s DNF.

Smoke was seen wisping from the rear of Perez’s Racing Point before pink flames rose out the back of his car. Notably, the flames presented no danger as he was quickly able to extricate himself from the car, and they were confined to the rear of the car.

The Mexican described the mechanical failure as a “blow” to his race and season, but he added that Grosjean’s crash put everything into perspective for him as it did for many. “When I had to retire it was a big blow, but after [Sunday] you really put everything into perspective. For me, one podium less, one podium more, it doesn’t matter,” he began.

“I think we executed a perfect race and the podium was definitely ours – it was going to be one of my best in F1. It was gutting to retire with three laps left due to an MGU-K electrical issue. We were going to finish ahead of a Red Bull and a Mercedes, which is a great credit to all of us at the team, and we’d done such a good job all weekend too.

“We’ve lost out on some really important points, which makes it a bit more difficult in the Drivers’ and Constructors’ Championship battles, but the positive is that there are still two more races to make up for it,” summed up Perez as Racing Point is now fourth, 17 behind McLaren, who ended up fourth and fifth in the grand prix.

A major beneficiary of the Mexican’s failure to finish was Red Bull Racing’s Alexander Albon, who had run the majority of his own race behind his rival in fourth place, as Perez sat third through much of the race after the red flag period.

Some used Perez’s DNF to discredit Albon’s podium, but the London-born Thai driver argues that he got himself into position to take third when the opportunity ultimately arose. “Obviously Sergio had a great race too and he had the blow-up, so partly, let’s say, not fully satisfied but it was still there. We had to be there to capitalise on it,” he began.

“I’m not saying I’m not satisfied. It’s not like 50%, I’m 95% satisfied. It’s still a good race, just little things, fine tuning. I know I was struggling a little bit with tyre deg through the stint but we were on a similar strategy to Lewis we had two mediums so it was quite hard to push on the second stint but saying that, yeah, of course I want to be better, I want to be faster and challenging more often for podiums,” Albon said.

Others argued his performance after a stronger race at Turkey could secure him the Red Bull seat in spite of Perez’s drive, therefore costing the latter – who has been widely praised for his mid-field performances this year – a seat in F1 in 2020.

When asked if his DNF, contrasted by Albon’s success, could have hurt his chances, Perez said that his many years in F1 are evidence enough of his merit. “I’ve been in the sport ten years,” he said. “People know what I can and what I cannot do. I’m pretty relaxed about it, pretty confident in my capacity and the way I’m delivering now but also the way I’ve delivered over the ten years. I’m pleased with that.”

Here’s what happened between Daniil Kvyat and Lance Stroll: https://www.formula1.com/en/video/2020/11/2020_Bahrain_Grand_Prix__Stroll_flips_and_crashes_after_Kvyat_contact.html