Home Karting Kremers and Gustavsson crowned at Genk, Zilisch on track for the Academy 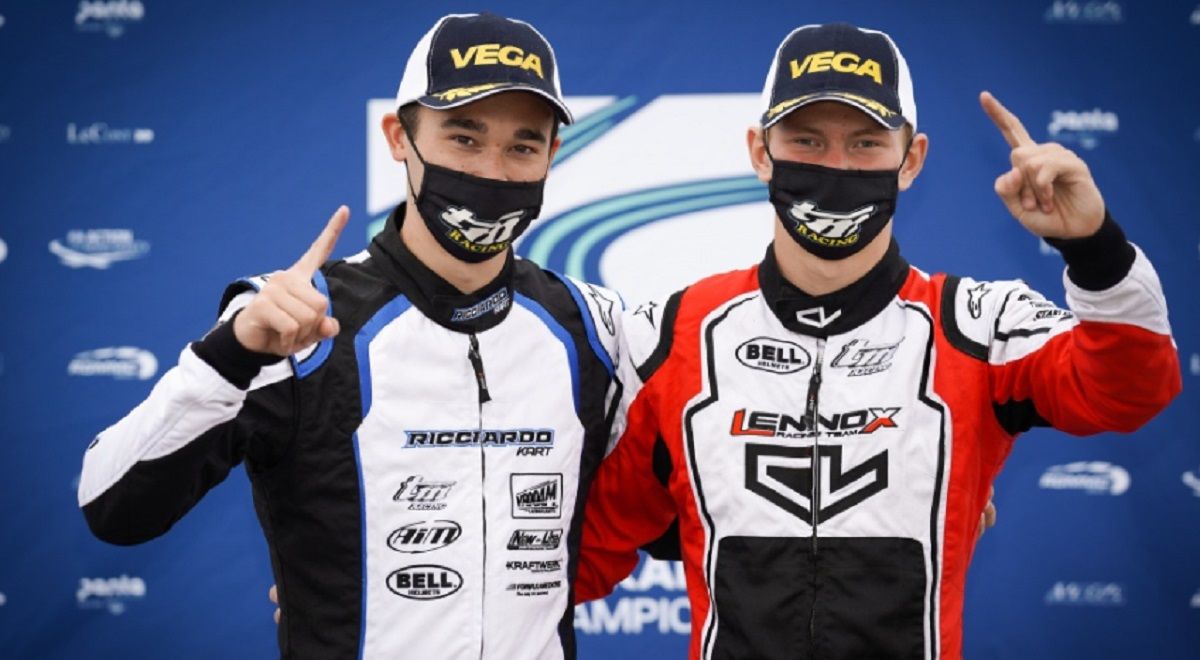 In perfect weather conditions, the last day of the Genk competition offered a high quality show to the fans of close racing from all over the world. In the FIA Karting European Championship – KZ, Stan Pex won the Final in front of Marijn Kremers who took the title. In the FIA Karting European Championship – KZ2, the scenario was similar with the victory of David Trefilov and the crowning of Viktor Gustavsson. By winning the Final of the FIA Karting Academy Trophy, Connor Zilisch took a decisive option on the title.

Although the field had suffered from the infection-control constraints imposed by the renewed prevalence of COVID-19 in Europe, the FIA Karting competition at Genk kept its promises in terms of sporting intensity. Three beautiful Finals concluded the weekend of racing with their share of suspense and twists and turns. The first two European titles of the year were resolved in breathtaking battles followed via live streaming around the world while the Academy Trophy is still in the process of determining its next winner.

The challenge wasn’t easy for Marijn Kremers (NLD – Ricciardo Kart/TM Racing/Vega) at the beginning of the Final, because he had to get a good result while his rivals couldn’t score many points. Stan Pex (NLD – KR/TM Racing/Vega) complicated his task by taking the lead in the Final on the fifth lap. Jorrit Pex (NLD – KR/TM Racing/Vega) moved up to third place after taking back three places and it was further down the order that the Championship was being decided. After a bad start, one of the three protagonists, Alessandro Irlando (ITA – Birel ART/TM Racing/Vega) came back to fifth position, before a spoiler penalty relegated him to seventh place. Simo Puhakka (FIN – Tony Kart/Vortex/Vega) finished 9th without being able to defend his chances. Kremers was in control of the race and didn’t need to attack Stan Pex who he followed closely from beginning to end. The Qualifying poleman Noah Milell (SWE – Tony Kart/Vortex/Vega) finished fourth in front of Adrien Renaudin (FRA – Sodi/TM Racing/Vega). Crowned FIA Karting World Champion – KZ in 2019, Kremers had planned to start this year in single-seaters, but after the interruption caused by the pandemic, he could not resist the proposal from the Birel ART Racing team to resume karting. A beautiful title of FIA Karting European Champion – KZ rewarded his first-rate performance in karting.

Viktor Gustavsson (SWE – Birel ART/TM Racing/Vega) took pole position in Qualifying but started only in fourth position on the grid for the Final of the FIA Karting European Championship – KZ2 in Genk. He immediately moved up to second position behind the revelation of the meeting, David Trefilov (DEU – Maranello/TM Racing/Vega), whereas his main rival for the title, Simone Cunati (ITA – Birel ART/TM Racing/Vega), who was initially third, dropped out after a crash. Another contender, Paavo Tonteri (FIN – Tony Kart/Vortex/Vega) also lost ground and finished ninth. Trefilov was able to enjoy his hour of glory as winner of the Final, whereas Gustavsson was satisfied with second place and took the title in the colours of the team Leclerc by Lennox Racing. Kristijan Habulin (HRV – TB Kart/TM Racing/Vega) was on the third step of the podium in front of Arthur Carbonnel (FRA – Sodi/TM Racing/Vega), who started last after a breakdown in a Qualifying Heat and climbed up 11 places in the Final. Despite coming back 12 places to fifth position, Giuseppe Palomba (ITA – Birel ART/TM Racing/Vega) was not able to beat Trefilov in the Championship.

ZILISCH CONFIRMS HIS FORM IN THE ACADEMY TROPHY

Thanks to a superb Final that he led from start to finish, Connor Zilisch (USA) took an irreversible lead in the FIA Karting Academy Trophy. The race was again very lively. For a long time second, Macéo Capietto (FRA) couldn’t resist the impressive comeback of Theo Micouris (GBR) from seventh to second position. Nevertheless, the Frenchman moved up to second place in the classification before the expected conclusion at Lonato (ITA) at the beginning of October. Albin Stureson (SWE) made a remarkable debut in fourth place, whereas Rafael Modonese (PER) came back from 16th to fifth position in front of Zachary David (PHL), who was a great protagonist in the racing. Second at Adria, Maxime Furon-Castelain (LUX) had a difficult weekend which ended in 18th position with a spoiler penalty.