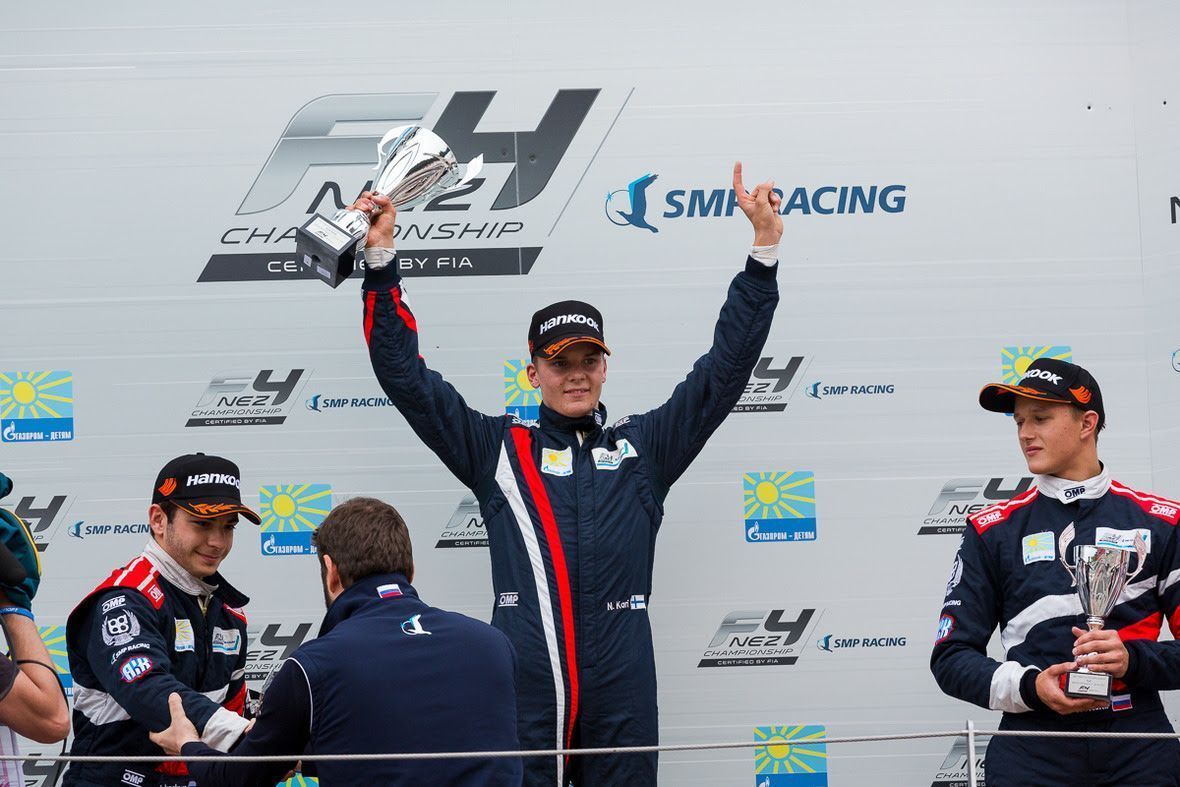 After only six rounds, the fifteen years old driver from Finland was crowned 2015 SMP F4 Champion and will be the winner of the 350.000€ prize help from the Series to go to the FIA F3 European Championship next season.

It was an unexpected nice day which greeted the team this morning on the Russian circuit of Moscow Raceway, promising a dry race on slick Hankook for the young drivers. A better chance for the Championship runner-up, Russian Vladimir Atoev, not to let his rival, the rain master Niko Kari, to take too much lead on the two scheduled races.

Starting from P10 Atoev had to finish no further than P8 to stay in the game and as the lights went off, the Russian was on a mission, taking a very good start to go up through the field, being P7 already after few corners.

But Niko Kari who started in pole position also had a clear start and pulled away from Nerses Isaakyan who was in a battle with Finn Niklas Nylund for P2 but Flying Koala Isaakyan was the one to keep the lead. Behind them Vartanyan did not manage to keep P4 as he dropped down the classification to P8, and Atoev was going all the way up and overtook Maslennikov in a bold move for P5. As the race was about to end, Aleksey Korneev and Nikita Sitnikov had a contact and Korneev flew and rolled over the track in a scary-breathtaking-moment but thankfully the young driver got out from the car unhurt.

At the chequered flag, Niko Kari took his sixth win of the season, pulling a bit more away in the fight for the championship as Atoev bagged 10 points only. Nerses Isaakyan and Nikita Troitskiy completed the Race 2 podium.

It was not much time until Race 3 was around the corner, and it was Nerses Isaakyan who was in pole position thanks to his double best time in quali yesterday. The Russian man had a very good start and kept the lead, but for few corners only as Niko Kari overtook Isaakyan in the last corner before lap 2 even started. Unfortunate Atoev was under investigation for a jump start and got penalized with a drive through, which he served immediately before charging again in the race to recover positions. But the amazing fight came from Finn Niklas Nylund who started last and was already P7 at the end of lap 2, P5 at the end of lap 8 and P4 at the chequered flag.

However all eyes were on Niko Kari, when the Finnish driver crossed the finish line in first position, taking his third victory of the week-end, and the Title of the maiden SMP F4 Championship season with three races still to go. Nerses Isaakyan and Nikita Troitskiy completed the podium for Race 3 again.

“I am incredibly happy to be the first ever winner of the SMP F4 Championship! It was a great season and I have learnt so much during all the races this year. We had very good fights for the championship with Vladimir Atoev! It was very challenging. I think it’s now time for me to celebrate!” says Niko Kari.

The next race in Sochi will be closing the first SMP F4 season and the fight for the third place in the overall classification will be at its peak between Aleksanteri Huovinen and Aleksey Korneev!