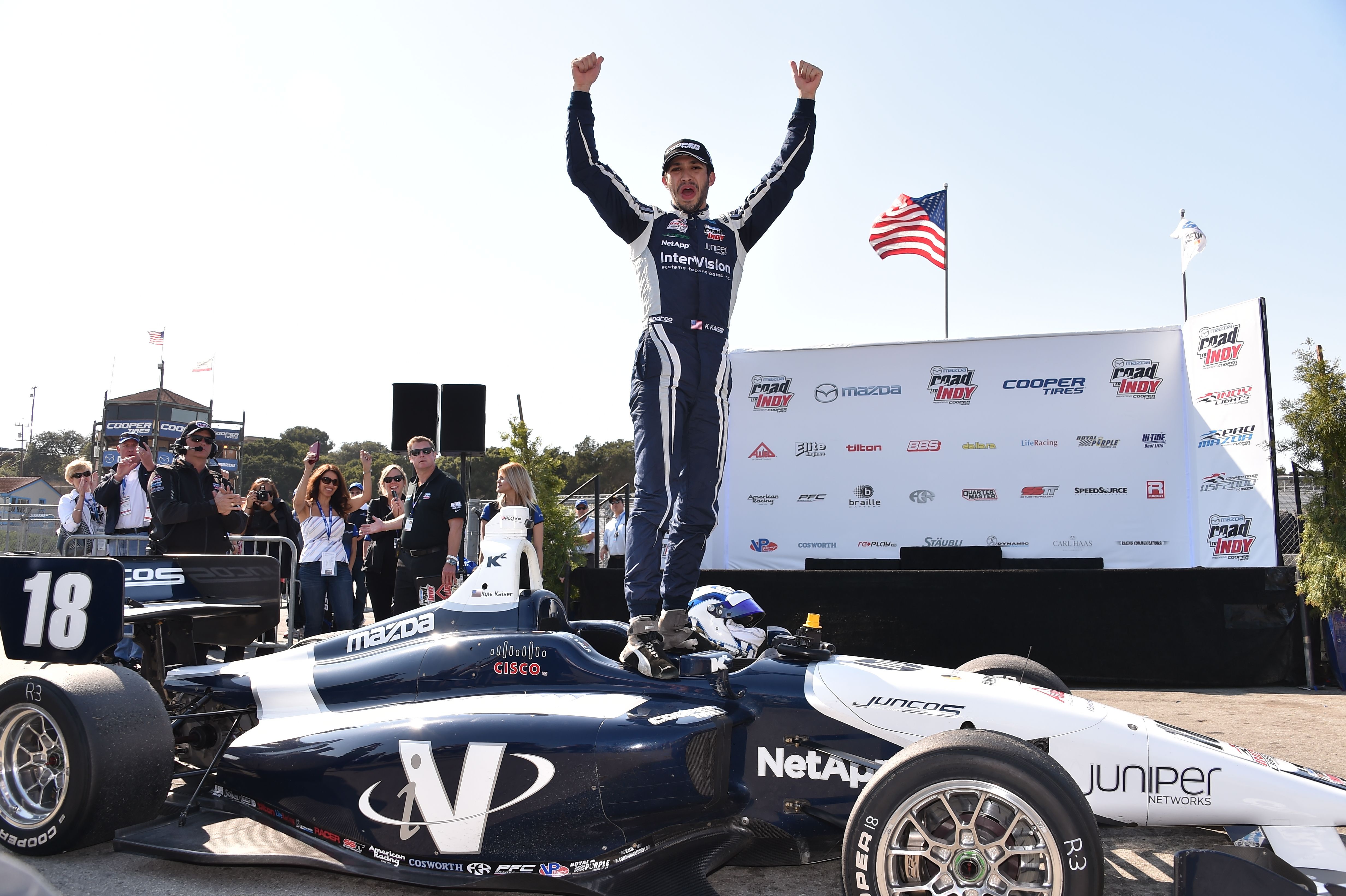 Carlin’s Ed Jones took the lead in the 2016 Indy Lights Series presented by Cooper Tires standings this afternoon, with a strong second place in California.  Jones claimed second in race one at the Mazda Raceway Laguna Seca, despite race long pressure from Zach Veach behind.  The Carlin man now enters the final race of the season with a seven-point lead over Santiago Urrutia.  Team mate Neil Alberico continued his strong form from Watkins Glen with a sixth place finish, while there was more bad luck for Felix Serralles, who took eighth, despite contact during the race.

It took two attempts to get the field away this afternoon, with Kyle Kaiser leading from the pole position, and Jones second.  Serralles lined up fifth, while Alberico was 12th.  As the green flag was shown, Jones held his ground, briefly challenging Kaiser for the lead through the first few corners.  Jones soon settled into second though, concentrating on keeping Veach behind.

Behind the leaders Serralles was holding sixth while Alberico had already moved up ninth.  The Californian was making steady progress at his home event, and only a few laps later had climbed to seventh from his 12th place starting position.

Dogged by the bad luck that has plagued his season, Serralles dropped back to 13th after contact with Stoneman and was left with it all to do again 10 laps in.

With Kaiser still leading, Jones had Veach ever present in his mirrors, but the Belardi car was never close enough to mount a real challenge. Alberico meanwhile was determined to make up places, passing Garett Grist for sixth in the final few laps.

Serralles was also a man on a mission, the Puerto Rican had made his way into the top ten, and by the chequered flag had somehow recovered all the way to eighth.  Alberico was ahead of him in sixth place, while Jones claimed second and the championship lead.

With just one race remaining of the 2016 season, the battle for the championship spoils lies between just two drivers, Jones and Urrutia, with four others drivers mathematically ruled out following this afternoon’s race.

Speaking about his race, Jones said, “I got a really good start; I got around the outside to keep second, but I couldn’t quite match Kaiser’s pace.  I think degradation was an issue again today, for the second race in a row, and that’s a new challenge we’ve had to deal with at the end of the season. Tomorrow we’re going to have tune the car a bit to adapt to that, particularly as it’s a longer race as well.  It’s going to be a tricky one tomorrow and of course there’s a lot of things resting on it. We’ll just keep our heads down and try our best as we did today.”