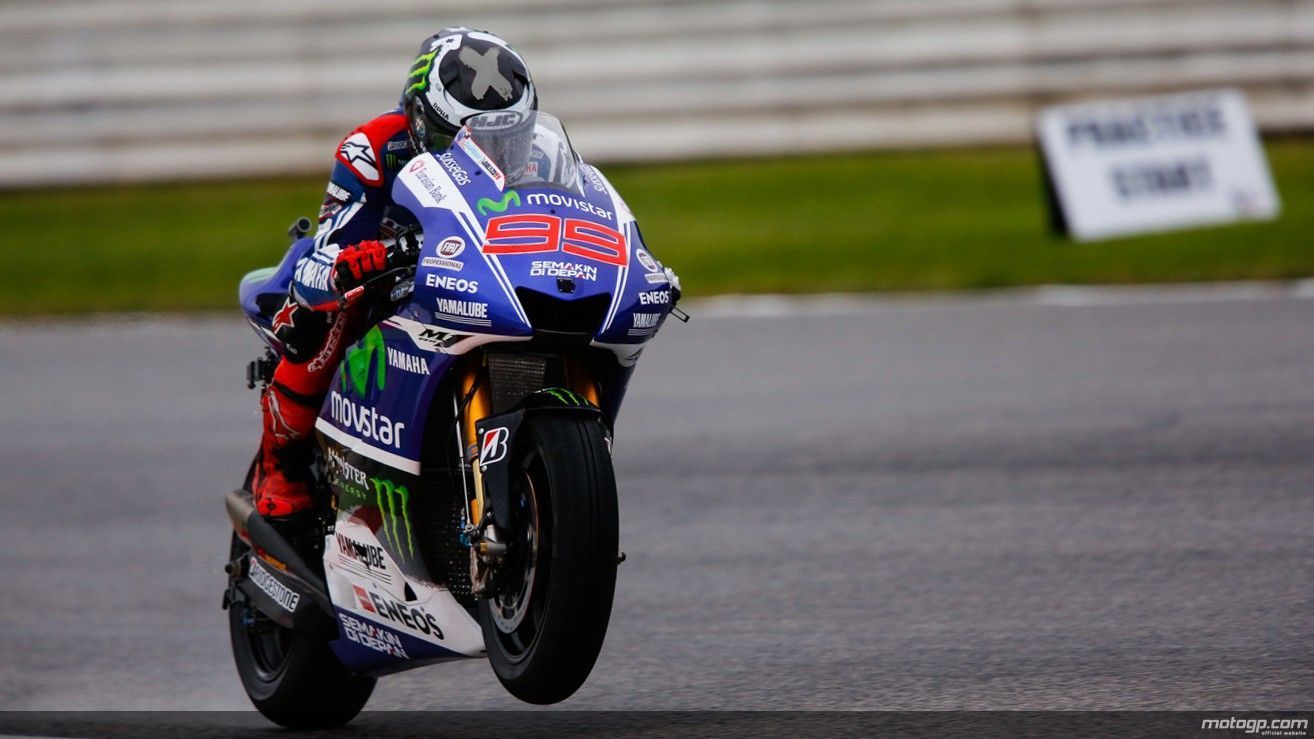 With only 5 minutes to go before the start of the race, all racers were on the grid talking with their engineers about strategies while the mechanics were making the last adjustements.

The race stewards stated that the start was dry with a temperature of 19°c, while a few clouds loomed over announcing upcoming rain.

Racers chose to start with hard tyres in the front and medium on the back.

The dry start was very lively with many overtakings in the groups of racers. Dani Pedrosa started with the first place but he was quickly passed by Andrea Iannone and then Marc Márquez. Finally, Jorge Lorenzo also passed him at the end of a lap full of developments.

After doing the first run with medium tyres, the Italian and leader of the championship changes his tyres to the benefit of Lorenzo. Iannone left the race after falling in one of the fastest areas on the track. Márquez, Lorenzo and Pedrosa were at the lead but could not escape the two Yamahas of Valentino Rossi and Pol Espargaro, who were just behind them. Andrea Dovizioso and his Ducati was also catching up from the 6th place.

Marc, leader and free of Iannone attacks, was just starting to impose his rhythm when Rossi gave everyone quite the fright. As he was trying to pass Pedrosa his path went out of the track and he fell to the ground. The impact was quite strong and Valentino had to be carried away to the clinic on a gurney. Luckily, it seems he did not suffer any major injury.

Jorge Lorenzo was then able to race much faster than in the free practice. He was able to maintain a gap of half a second between him and Marquez. As for Pedrosa, he was behind at the third place at less than a second.

All three racers escaped, leaving Dovizioso and Bradl behind with a gap of more than 4 seconds. Even farther behind came Alvaro Bautisa who was fighting with the Espargaró brothers for the 6th place.

Jorge then took control of the race after Márquez went a little bit too wide. As the clouds became more and more menacing, the pits saw more and more activity. Mechanics started getting the motos ready for rain.

With only 12 laps to go, the Honda racer took the lead again in the first curve. In only three sectors, Marquez was able to put 5 tenths between them and he gave his best just as the stewards started flying the white flag announcing rain. The rain was very light and the track remained dry, as a result no one went to the pits to change tyres.

Jordi did not lose much ground and was even able to pass the leader as he decided to go lighter. In the meantime, Pedrosa was waiting for his moment from the third place.

The doubts provoked by the rain also led Lorenzo to cut his rhythm and he dropped to the third place as Dani went in for the kill and reached the first place with only 7 laps to run. He took hold of the pack and got everything he could from the track.

Lorenzo also changed tyres as the rain was intensiying, Marquez struggled a bit not to fall just as Pedrosa indeed fell. Each lap was an ordeal for the leader who fell 3 laps from the finish, committing his second mistake in the last two races. Lorenzo therefore took the first position with Aleix Espargaro second, 4 seconds behind.