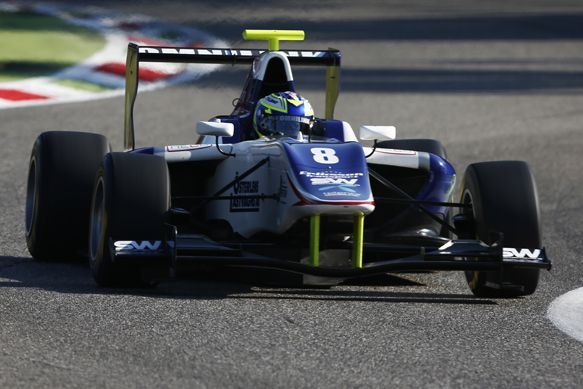 Driver of Koiranen GP Jimmy Eriksson won first race of GP3 series at Monza. Sweden led from start to finish and did not allow a single attack on his positions. Second and third places were taken by drivers ART Dino Zamparelli and Marvin Kirchhofer.

The race was full of struggle and a lot of minor incidents. The first loss peloton suffered before formation lap – Nelson Mason did not come out to the start and did not take participation in the race. At the start leaders kept the positions, but Nick Yelloly rolled back. In third place came out Robert Visoiu, who started race from seventh position.

Championship leader Alex Lynn, among several other drivers cut first chicane, but had not received advantages and was not fined. In the second chicane mistaken his main rival for the title Richie Stanaway and then lost speed. Defensive, he touched of Pal Varhaug’s car in Lesmo – as a result, Norwegian went off the track and came down. Stanaway rolled back.

On the second lap encountered Luca Ghiotto and Alex Fontana. Cars were damaged, but both drivers were able to continue driving. However, this incident triggered a series of other accidents – in particular, between Santiago Urrutia and Sebastian Balthasar. For the German struggle was over, Urrutia and Ghiotto returned to the pits. Urrutia came down, and Ghiotto returned to the track, albeit with a lap gap.

On the seventh lap descended Ryan Cullen, on the 13th – Alex Fontana. Robert Visoiu received penalty for overtaking under yellow flags and lost third place. Richie Stanaway was able play several positions, ahead of Kevin Ceccon, and on the last lap he also overtake Nick Yelloly, but eventually finished only ninth, while Lynn – sixth.