According to Motorsport.com, the Formula 1 1997 world champion leaves the Monegasque team and will be replaced by British driver Mike Conway.

After only three week-ends spent in Formula E, the only F1 world champion in the category, Jacques Villeneuve leaves his team Venturi. An accord of immediate separation has been found before Buenos Aires.

The Canadian driver had a disappointing start in the series at Beijing being taken out of the race by Antonio Felix Da Costa. After a promising 11th place at Putrajaya, he was disappointing again at Punta Del Este where he could not even take part of the race after a crash in qualifying.

If Jacques Villeneuve’s sportive future is still uncertain, he will stay in the Formula 1 paddocks as consultant for French channel Canal +.

He will be replaced by British driver Mike Conway. Stéphane Sarrazin’s teammate in WEC with Toyota, he was logically chosen to replace Villeneuve. First called by Dragon Racing in 2014, he is eventually dropped before the beginning of the season. Motorsport.com relates his sayings:

“The series is innovative and quite unique. It is quickly growing momentum and it’s attractive to a lot of manufacturers to showcase their technologies, so, it is exciting to be a part of this series.”

Conway says he is working hard at the simulator in Monaco to be ready for the e-prix of Buenos Aires. He will be the teammate of another endurance driver: Nick Heidfeld. 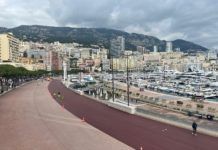