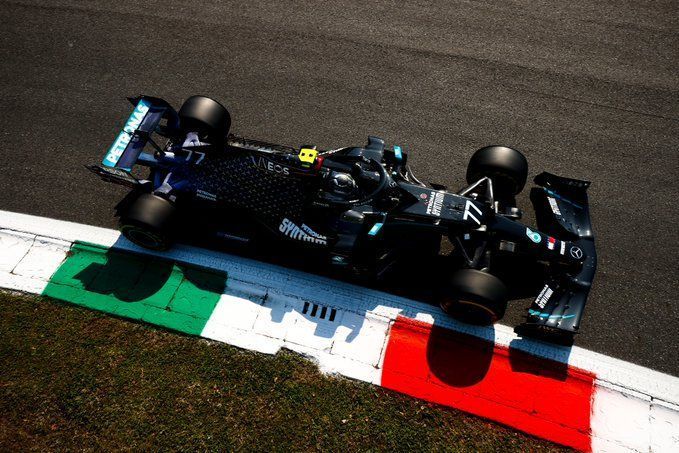 It was expected turn of events in FP3 of F1 Italian GP at Monza as drivers tried to understand the new slow lap rule set by the FIA Race Director Michael Masi for Saturday running, in order to stop rivals ruining each other’s laps.

The minimum time set was a 1m43.000s but there were drivers doing slower than that which could prove difficult to manage in qualifying. On the track, though, it was Mercedes’ Bottas leading with a 1m20.089s as he led McLaren’s Sainz (1m20.318ss).

It was a late push lap from Sainz which came just after a red flag caused by Renault’s Ricciardo (1m20.419s), who had improved to third prior to it. The Australian stopped on the track with an issue but it wasn’t clear what it was as the engine stopped.

The lap from Sainz dropped Norris (1m20.412s) and Ricciardo to third and fourth as they pushed Mercedes’ Lewis Hamilton (1m20.439s) to fifth with Red Bull Racing’s Max Verstappen (1m20.456s) only sixth, having set his best on the medium tyres.

Teammate Alexander Albon (1m20.563s) slotted in seventh but had multiple of his laps deleted due to track limits as post-session replays showed Hamilton just managing to avoid a big accident on the back straight, when he tried to get ahead of other cars.

He was stuck behind train of cars and pulled to the inside to get by them when a Haas tried to do the same which pushed Hamilton to go wide onto the grass at a good speed. With Ricciardo’s day ending early, Renault’s Esteban Ocon (1m20.693s) finished eighth.

Here’s what they said after Friday of F1 Italian GP