IndyCar has released a revised schedule for 2020 with Detroit race gone while two races to take place at IMS Road Course and also a double-header at Iowa and Laguna Seca.

Shortly after coming out and saying that they stand by Detroit as their season opener, IndyCar has released a statement detailing their new 2020 calendar, which has the June’s 600-mile race at Texas Motor Speedway as the first of the season.

On top of this change, there will be an additional race at Indianapolis Motor Speedway’s road course, and a double-header at both Laguna Seca and Iowa. The second IMS race is dubbed as the ‘INDYCAR Harvest GP’ and will take place on October 3.

The extra rounds at Iowa and Monterey is scheduled during the same weekend as their original IndyCar races on July 17-18 and September 19-20 respectively – albeit the exact dates have been shuffled around to adjust the other changes.

Other IndyCar rounds remain unchanged for the time being, and the race at St. Petersburg looks set to remain the finale, even though a specific date for that event has yet to be announced, as can be seen in the schedule below: 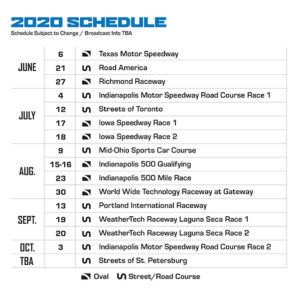 These drastic modifications mean that IndyCar will now have a 15-race schedule as opposed to the lower number of 14 which were left after the initial round of cancellations and postponements which took place in March.

Here’s the official statement from IndyCar:

The NTT INDYCAR SERIES announced several calendar updates today following the cancellation of the Detroit Grand Prix due to the COVID-19 pandemic. Two previously scheduled events will become doubleheaders along with the addition of a third weekend of racing at the famed Indianapolis Motor Speedway. With these additions, there are 15 races on the 2020 INDYCAR calendar, an increase of one event from the 14 races announced on March 26.

“We’re committed to bringing fans as much on-track action as possible,” Penske Entertainment Corp. President and CEO Mark Miles said. “Our updated schedule features additional racing at fan-favorite venues and adds to the total number of events on our calendar. The COVID-19 situation continues to be dynamic and challenging for everyone, so we have developed contingency plans which will allow us to respond to changing conditions. Our goal is to preserve as much racing competition as possible while prioritizing the health and safety of our participants and spectators.”

INDYCAR’s established events at Iowa Speedway and WeatherTech Raceway Laguna Seca will become doubleheaders. The Iowa 300 event weekend will add a race on Friday, July 17 along with the previously scheduled race on Saturday, July 18. The Firestone Grand Prix of Monterey event weekend will now feature a race on Saturday, Sept. 19 in addition to the previously scheduled race on Sunday, Sept. 20.

Race fans also will be treated to a third INDYCAR event at the Racing Capital of the World, with the INDYCAR Harvest GP on the IMS road course taking place Saturday, Oct. 3. This event is in addition to the GMR Grand Prix, already scheduled for Saturday, July 4, and the 104thRunning of the Indianapolis 500 on Sunday, Aug. 23.

“Like our fans, we’re disappointed we won’t be racing in Detroit this year,” Miles said. “However, we’re excited to return to Belle Isle in 2021 and know we’ll put on a great show for everyone when we do. We also appreciate the flexibility and support of our event promoters at Iowa Speedway and Laguna Seca, who have enthusiastically embraced the opportunity to host double-headers.”

Here’s how the second round of iRacing IndyCar Challenge went