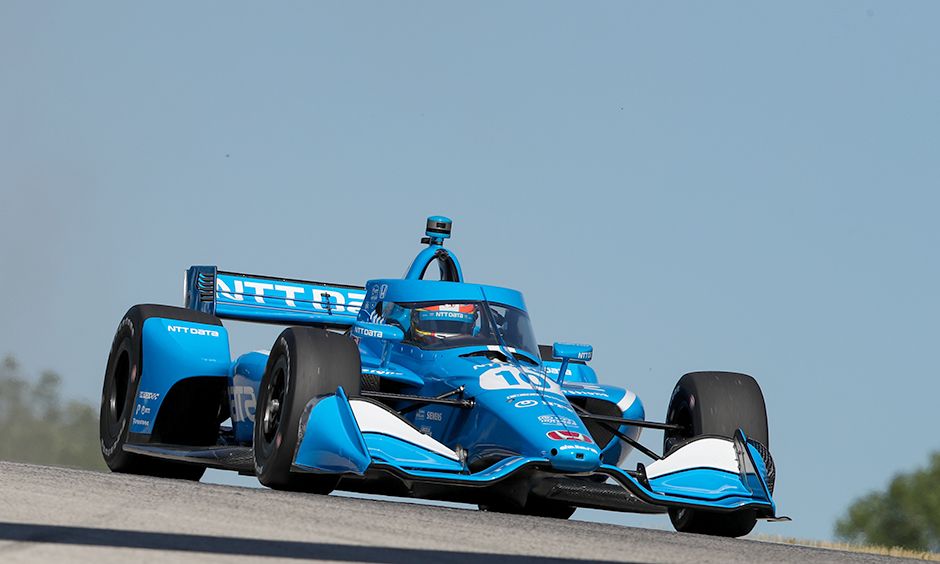 Palou drove his No. 10 NTT DATA Honda to a 1.9106-second victory over the No. 26 Gainbridge Honda of Colton Herta. 2014 series champion Will Power finished third in the No. 12 Verizon 5G Team Penske Chevrolet. Palou, who led five of the 55 laps after starting fifth, averaged 119.424 mph in a race slowed by four full-course caution periods.

“It always feels awesome even if it’s your lucky day or just because you have really good pace,” Palou said. “We’ve been close. Indy road course, Detroit, Indy 500, and today I was like, ‘Oh, no, we need to get that win.’ A win is a win. It’s always the best thing.” Palou took a 28-point lead over Pato O’Ward in the series standings with his second victory of the season, as he also won the season opener on April 18 at Barber Motorsports Park.

O’Ward, who led Palou by one point as the series leader entering this race, finished ninth in the No. 5 Arrow McLaren SP Chevrolet. Spanish driver Palou became the first Chip Ganassi Racing driver other than six-time series champion Scott Dixon to earn at least two victories in a season since Dario Franchitti in 2011.

Palou also kept Chip Ganassi Racing spotless at Road America over the last two seasons, as Dixon and Felix Rosenqvist swept the doubleheader here last summer for the team. While Power returned to the podium for the first time since finishing second in the season opener at Barber, this was the second straight heartbreaking result for his Team Penske teammate Newgarden.

NTT P1 Award winner Newgarden led a race-high 32 laps in the No. 2 Hitachi Team Penske Chevrolet and looked to be poised for his and Team Penske’s first victory of the season on a restart at the end of Lap 53. But Newgarden’s car suffered a mechanical problem when the green flag flew, and Palou blew past him on the outside before Turn 1 on Lap 54 for a lead he wouldn’t surrender.

Meanwhile, Newgarden limped the final two trips around the 14-turn, 4.014-mile circuit with his compromised car and ended up a disappointing 21st as the last car on the lead lap. It was the second straight Sunday of despair for Newgarden, who was passed by O’Ward for the lead with three laps remaining in Race 2 of the Chevrolet Dual at Detroit and ended up finishing second at Belle Isle after leading 67 of 70 laps.

“Down the front straightaway, as soon as I got to fifth gear, I tried to shift to sixth, and it didn’t take the selection, so I was stuck in fifth,” Newgarden said. “I was trying to get it up to sixth gear, and it wouldn’t go. Then I got stuck in fifth in Turn 1. I finally got it to go down, and I just could not get it to upshift after that. I got it to first, essentially, and tried to stay out of the way.

“I’m not sure what happened. Disappointing for all of us. I knew we had a great car all day.” Team Penske also lost a possible victory in Race 1 last Saturday at Detroit when Power’s leading car wouldn’t refire on pit road after a red flag period late in the race.

“I don’t know what the luck (is) with our team right now, but with Josef to have a gearbox issue on the last bloody lap, almost the race won, like we were in Detroit, it’s just heartbreaking,” Power said. “I couldn’t believe it when he was pulling off to the side.”

Tire wear was a hot topic through practice and qualifying Friday and Saturday, so pole sitter Newgarden and the other top seven drivers on the starting grid elected to begin the race with grippier but less durable Firestone alternate “red” tires and switch to the more durable Firestone primary “black” tires during their final two stops.

Newgarden was hurt by his tire choice at the end of Race 2 last Sunday, as he was on worn-out alternate tires at the end of the race and was a sitting duck for O’Ward and his primary tires in the last three laps. That mistake wasn’t repeated today, and it was the right call.

Two-time series champion Newgarden, Palou, Herta and Power all were on the strategy of starting with alternate tires and switching to primaries after their first pit stop, biding their time for a final race for the checkered at the end after other drivers on different strategies cycled through their final stops.

Newgarden was running second, about seventh-tenths of a second ahead of third-place Palou, when leader Oliver Askew – on a different fuel strategy – pitted from the lead in the No. 21 Direct Supply Chevrolet on Lap 51.

But Newgarden’s gap to Palou was erased on the same lap when Ed Jones spun in Canada Corner after the rear suspension broke on his No. 18 SealMaster Honda. That triggered the last full-course caution, setting up the final restart duel between Newgarden and Palou that never materialized due to Newgarden’s technical problem.

There were seven different leaders and 11 lead changes, mainly due to daring fuel strategies from teams lacking the pace of the frontrunners. But the dramatic finish was the culmination of a no-holds-barred race that featured ferocious battles for position throughout the field, with cars hip-checking each other and kicking up plumes of dirt off course during the duels.

[Note: The above is as per press release from IndyCar, with no edits made]