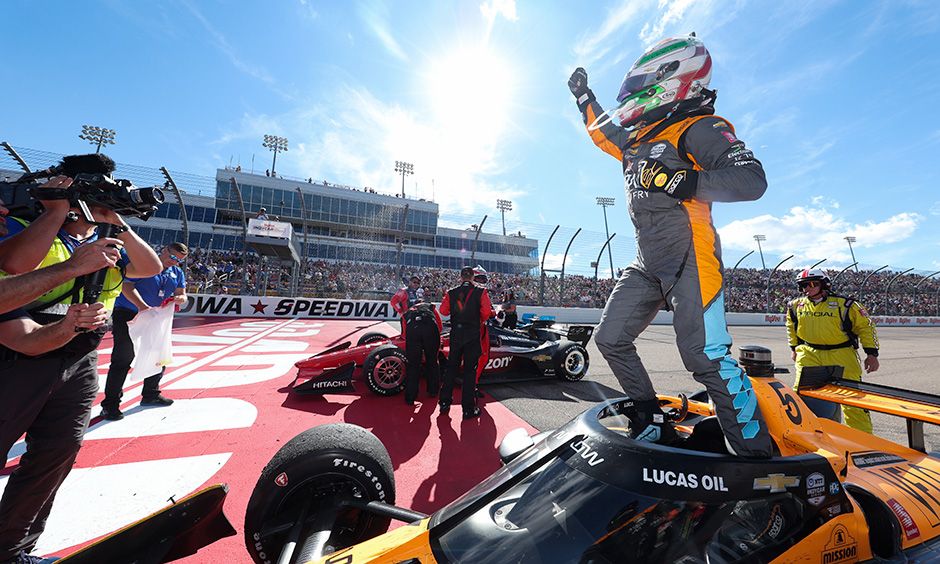 Josef Newgarden took glory in Race 1 of IndyCar weekend at Iowa Speedway, as Pato O’Ward came through to win Race 2.

It might be time to change the name of the city where Iowa Speedway is located from Newton to Newgardenton. Josef Newgarden became the all-time INDYCAR SERIES win leader at Iowa Speedway by capturing the Hy-VeeDeals.com 250 presented by DoorDash on Saturday, his fourth career win at the .894-mile oval and his fourth win of the 2022 season in the No. 2 Hitachi Team Penske Chevrolet. Newgarden and Ryan Hunter-Reay both entered this race tied atop the all-time Iowa win list with three apiece.

Newgarden, who started second, beat Pato O’Ward in the No. 5 Arrow McLaren SP Chevrolet to the checkered flag by 6.1784 seconds for his 24th career victory. NTT P1 Award winner Will Power finished third in the No. 12 Verizon Team Penske Chevrolet on a scorching day in which air temperatures nearly reached 100 degrees.

Two-time NTT INDYCAR SERIES champion Newgarden added this victory to his wins in 2016, 2019 and the second race of the Iowa doubleheader in 2020. He’ll get a chance to add to his win total at Iowa in the Hy-Vee Salute to Farmers 300 presented by Google at 3 p.m. ET Sunday, live on NBC and the INDYCAR Radio Network), starting second again behind teammate Power.

Newgarden also passed Power for second in the NTT INDYCAR SERIES championship standings and clawed to within just 15 points of leader Marcus Ericsson, who finished eighth in the No. 8 Huski Chocolate Chip Ganassi Racing Honda. There was nothing sideways about Newgarden’s performance today. He led 208 of the 250 laps and ran away from O’Ward over the last 25 trips around the “Fastest Short Track on the Planet.”

Newgarden also has finished every lap in the last nine INDYCAR SERIES races at Iowa. That’s a stunning feat considering the perils of close-quarters oval racing and how easy it is to fall a lap down on a circuit where race laps take only 20 seconds. While Newgarden never trailed after Lap 80, O’Ward made it interesting during the final fuel and tire stint. O’Ward pulled to within eight-tenths of a second of the lead with 25 laps to go when Newgarden was held up in traffic.

But once Newgarden cleared that thicket of cars, it was check-out time. He will split $10,000 with his team and his two charities, SeriousFun Children’s Network and Wags and Walks Nashville, for the victory as part of the PeopleReady Force for Good Challenge. Rinus VeeKay continued his recent resurgence by finishing fourth in the No. 21 Bitcoin Racing Team with BitNile Chevrolet, his second top-four finish in his last three starts. Six-time NTT INDYCAR SERIES champion Scott Dixon followed his victory last Sunday at the Honda Indy Toronto by finishing fifth in the No. 9 PNC Bank Chip Ganassi Racing Honda.

Dixon is one of five drivers lurking within about a race’s worth of points from leader Ericsson. Newgarden is second, 15 points back; Power third, 22 behind; Palou fourth, 33 behind; Dixon fifth, 38 back; and O’Ward sixth, 59 back. Seven-time NASCAR Cup Series champion Jimmie Johnson also was one of the stars of the show today, finishing 11th in the No. 48 Carvana Chip Ganassi Racing Honda.

Johnson made many brave moves in the highest groove of the racetrack to pass numerous foes. He led a career-high 19 laps – one of only three lap leaders today – and was running in the top five for a healthy portion of the race. While there were only three lap leaders, the competitive race featured 772 total on-track passes, including 372 for position.

Pato O’Ward won the Hy-Vee Salute to Farmers 300 presented by Google on Sunday at Iowa Speedway after dominant leader Josef Newgarden crashed out of the race with 65 laps remaining. O’Ward drove his No. 5 Arrow McLaren SP Chevrolet to a 4.2476-second victory over Will Power in the No. 12 Verizon Team Penske Chevrolet. Scott McLaughlin finished third in the No. 3 Freightliner Team Penske Chevrolet, giving the Penske team two of the top three finishers.

O’Ward earned his second victory of the season – he also won May 1 on the road course at Barber Motorsports Park – and fourth win of his NTT INDYCAR SERIES career. The victory, coupled with his second-place finish Saturday in the HyVeeDeals.com 250 presented by DoorDash, helped O’Ward climb from sixth to fifth in the series standings. He is 36 points behind leader Ericsson.

It looked like Team Penske might sweep the top two spots until Newgarden spun into the Turn 4 SAFER Barrier while leading on Lap 235 of 300 in the No. 2 Hitachi Team Penske Chevrolet. Newgarden, who won Saturday on the .894-mile oval, had led 148 of the first 234 laps and was 2.8384 seconds ahead of O’Ward before the stunning incident.

Newgarden was in cruise control before the crash, maintaining a steady gap to O’Ward. As he entered Turn 4 on the “Fastest Short Track on the Planet,” the left front wheel of his car lifted off the ground after an apparent mechanical problem in the rear of the car, sending Newgarden spinning into the SAFER Barrier. His car suffered heavy rear-end damage, but Newgarden walked away from the incident.

Two-time series champion Newgarden was on track to lead the championship by 10 points when he crashed. Instead, he was credited with 24th place and is third in the standings, 34 points behind Ericsson. After Newgarden’s unexpected exit from the race, O’Ward took the lead for good. The victory was secured when O’Ward, Power and the rest of the lead-lap drivers entered pit road for their final pit stops on Lap 239. O’Ward won the race off pit road and then deftly navigated lapped traffic over the closing 60 laps.

O’Ward put himself into position to grab the unlikely victory by passing NTT P1 Award winner Power as Power turned his out lap after his second-to-last pit stop on Lap 195. O’Ward gained 2.953 seconds on Power during his in lap, stop and out lap for his penultimate stop on Lap 194. Power led 80 laps, second only to teammate Newgarden’s 148 laps. O’Ward led 66 laps and averaged 140.681 mph in a race slowed by just two caution periods for 26 laps. O’Ward will split $10,000 with his team and his charity of choice for the victory as part of the PeopleReady Force for Good Challenge.